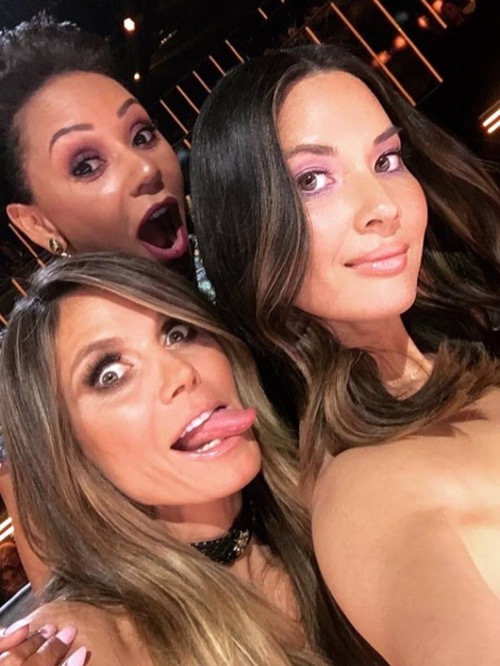 It was another round of cuts on tonight’s all new episode of “America’s Got Talent”. The celebrity guest joining the judges tonight was Olivia Munn and she sort of created a stir behind the scenes. It seems the contestants were all excited to find out that Olivia had come to see their acts and some of them even admitted to having a crush on her though the Human Fountains made sure their crush hadn’t gotten in the way of their act.

The all guy group had been warned last time to up their game because Simon hadn’t been impressed by their ability to spit at each other and on each other, so the guys decided to add protein. They went on to crack an egg in one of their mouths and used that to transfer to the other until they were all able to sprout eggy water.

It was a little hard to watch just because of the sheer grossness and so the judges hadn’t known what to think. The judges had been grossed out just as much as everyone else although they did tell the guys that they had in a way upped their act and so Heidi said maybe they could continue to do that. She said each time they went onstage they could something even more disgusting than the last and the guys said they could do that.

They said they had plenty of surprises left and somehow that hadn’t enthused Simon. Simon hated the act before and he definitely wasn’t a fan when they brought in an egg. The egg added to ick factor of people spitting into someone else’s mouth. Luckily for everyone, there was no other act like it and so the judges got to enjoy themselves with the next act. They next saw Shin Lim who was a magician.

His specialty was the slide of hand and he again put that on display tonight. Shin had invited Olivia onstage with him and he again showed how quick he could move that it was to the point where everyone wondered if he could do real magic. They were all wowed by Shin Lim and he was stronger this time around, which also means he was a strong contender for later. The next act that followed was the Melisizwe Brothers. They were all young and sweet.

Plus, it didn’t hurt that they knew how to sing and let the youngest amongst them be the singer because he was just too cute. They were one of the acts that came out stronger tonight. The others were a sister duo and even the admirable Sophie. Sophie was five-years-old and managed to not remember Frank Sinatra songs but also sing them without a problem. She could hit those high notes and she even knew how to hold them. And so she shocked everyone!

Except, cuteness aside, the judges were pulling away for what could work for them and focusing on what could work for the live shows. The live shows were a completely different beast because that’s America judging the acts! The judges couldn’t let acts pass onto the next round if they weren’t ready for them and so they made close attention to the dance group. The first dance group they saw was the Reyes Del Swing who gave a flawlessly routine.

It was so good that everyone said the group could be professionals and one of the things everyone loved about this group was how they were plenty of parts to it. Not everyone was doing the same thing and so the group ended up giving a full performance tonight that was easily entertaining. The next dance group on the other hand had had more heart. The dance group the Future Kingz were a group of young men and kids who were just living out their dream.

They all loved dancing and they wanted to do it professionally one day, so they took their passion to the stage. Their act was perhaps not as refined as Reyes Del Swing yet everyone still enjoyed it and they loved watching the group dance with such joy. The judges had all been in agreement on how much they enjoyed the act and so once dance groups were over – it came time for others to show off their magic tricks.

The next act was Leoz. Leoz was a mentalist/ telekinetic who had won over three of the fours judges last time and who tried upping his game tonight in order to finally win over Heidi. Heid hated his act because she said it was just silliness and so she didn’t call what he did magic. It was more like humor that just wasn’t for her! Heidi thought the whole act was dumb. She barely managed not hitting the reject buzzer on him this time and so its safe to say she still wasn’t won over.

Heidi told Leoz she still didn’t care for his act and that had hurt him because he thought he had increased things to such an extent that she would eventually find him entertaining. The fact she hadn’t had actually been personal for him and he had been grumpy when he packed up most of his props however he hadn’t changed a thing with Heidi.

She was still the only one on the panel that didn’t get his act and the audience booed her for upsetting Leoz. Afterward, she still hadn’t taken back what she said and so they moved on with the next act. The next act was the Angel City Chorale. There were 145 out of 160 from the choir tonight and they had once again been amazing.

The choir was started by their director Sue. Sue had amazingly brought together various races, religion, and political parties and somehow gave them one incredibly voice. The choir was unified and it was refined. There weren’t any mistakes or early starts as the choir began singing Christopher Tin’s “Baba Yetu”. It was simply beautiful and it moved quite a few people to tears. Olivia had been one of them and she ultimately hit the golden buzzer for the choir.

They were the first act to be chosen tonight for the next round and so they were a hard act to follow. The next act had been Shannon & Reckon which had been good during auditions and unfortunately turned into a flop tonight because the dog act had a misbehaving dog. Reckon refused to listen to its owner and it ruined everything when the dog suddenly decided to chew up the props rather than use them.

The act that followed that had been Exisdance and that too had been a flop. The man pretending a machine had taken over his body had surprisingly been boring to watch the second time around. It wasn’t real dancing and the man’s “machine” was a mere computer image on his chest. Now, the next act had been Hans. Hans didn’t seem like a typical entertainer only he was actually a great comedian that knew how to play to his audience.

He sang “Its Raining Men” tonight and had even had an outfit change onstage although it was his flirtation with Simon that really got everyone going and long after he walked off that stage he still managed to own it. Hans had been funny and the later acts had been more about a level of skill. Vivien Vajda had gone up after Hans and she gave a worthwhile performance.

Vivien had been a jump rope artist. She managed to up her game tonight despite spraining both of her ankles and that must have hurt her. She just never let the hurt showed while she was onstage and afterward they could see how much she was in pain when her friend helped carry her to the back.
The act after her had been Rob Lake and the illusionist had brought it. His act was completely different from other magicians and he managed to wow people by what he was able to do however Simon wasn’t a big fan because he thought the music, as well as the way Rob crossed the stage, was a little too cheesy for him, so the others are going to have to fight for Rob if they want to keep him.
The acts after that had all been musical. First, there was Leah Mathies who sang an original song and no one had been a fan of that because they thought the song hadn’t fit her voice.
Unfortunately, the same thing was also said about Hunter Price when he sang his original song and to make things even worse there had been a reject buzzer during his performance. Howie as it turns out still didn’t like him and so it was onto the next one. The last of the singing acts tonight had been Joseph O’Brien who became infamously known for never having kissed someone and as luck would have it his first performance had been cut into by Simon.
Simon hadn’t liked the way Joseph was singing the song and so Joseph asked if he could sing his original. His original song was a much better performance than the first one though it still hadn’t been enough. The judges told Joseph he had gotten caught up in his head and that’s why he wasn’t at his best. And they also said they would have to deliberate amongst themselves in order to decide about him.
The judges tended to say that a lot when they were split over who was good enough to stay on in the competition and so it wasn’t surprising when they held back that line with Vicki Barbolak. The comedienne was just as funny as before and so her place was assured while others weren’t. The judges had talked and they ultimately decided to cut the acts they could do without.
They cut the Human Fountain, Leoz, several singers including the very cute Sophie. And on the other hand, they kept both Rob and Shin who hadn’t thought they would both make it through to the next round. So ultimately the judges saved the Angel City Chorale, Shin Lim, Rob Lake, the Future Kingz, Hans, Joseph O’Brien, and Vicki Barbolak!
THE END!