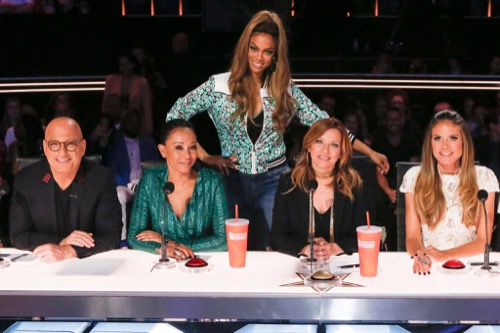 Tonight on NBC America’s Got Talent begins with an all-new Tuesday, July 31, 2018, episode and we have your America’s Got Talent recap below!  On tonight’s AGT season 13 episode 9 “Judge Cuts 3,” as per the NBC synopsis, “Country music superstar Martina McBride joins the judges’ panel and gets the opportunity to send an act directly to the live shows with a Golden Buzzer. During Judge Cuts, contestants have one last chance to impress the judges before going live for America’s vote.”

Tonight we have a guest judge, country artist, Martina McBride and she gets a golden buzzer.

The first act tonight is The Savitsky Cats, they are a cat act and they have brought new cats that the judges haven’t seen before. The audience gives them a well-deserved standing ovation. Simon asks if the cats are real. Howie loved it, he says they stepped it up. Martina loved it and thought it was thrilling to watch, she called the cats cute. Heidi loved the show, calls it a perfect idea. Mel B feels warm and fuzzy.

The next act is Blue Tokyo, an acrobatic dance group and they have put all new moves into their performance. Heidi loves it. Simon says it left him a little bit cold. Howie loved the new tricks and says he will fight for them. Mel B agrees with Simon.

OC Music and Dance are an orchestral band from Irvine, California and they have individually stepped it up. Mel B says that overall as a group it worked. Howie doesn’t think it was a step up from the last performance.

The PAC Dance Team is a dance group and they are dressed in Alice in Wonderland costumes. Howie hit his X buzzer, he says the show is so much more than a high school dance team. Heidi didn’t think it was their best. Martina loved it. Simon thinks the show needs acts like them but the music didn’t fit.

Angel Garcia is singing, “Just the way you are,” by Bruno Mars. Howie liked his song choice but didn’t like that his eyes were closed. Heidi says his eyes weren’t closed, he was looking at her the whole time. Martine liked his passion and the choice of music.

Jeffrey Li is singing, “One moment in time,” by Whitney Houston. Martina loves his voice, she says she can’t sing like that. Simon says he did really well.

Ms. Trysh is singing, “If you don’t know me by now.” She forgets the words and her performance is over.

Kazi is another singer, Simon says her performance was not as strong as her audition.

Bone Hampton is a stand-up comedian. Mel B says it didn’t go as well as it should have and she is disappointed.

Quin and Misha are a ballroom dance duo. Misha is 71 years old but excited to perform. Heidi and Martina are standing, along with the audience. Heidi says Misha inspires her and she is very impressed. Simon says the best part of these two is their personalities. Martini says they inspire people of all ages and hits the golden buzzer. Martina goes on stage and hugs Misha who is crying.

Noah Guthrie is a singer/guitarist who appeared on Glee before it was canceled. Mel B loved it, she liked seeing his personality. Howie loved it. Heidi loved the tone of his voice. Martina says he is well on his way to a singing career. Simon says he doesn’t think they have even come close to how good he can be.

Jules and Jerome are a teeterboard duo. Simon thinks they are talented, but they need to step it up and do something dangerous. Howie asks if they can do it, they say yes.

Fratelli Rossi is an acrobatic duo and they are doing a very dangerous act that they couldn’t even practice. They do their act, which is unbelievable and then they do it blindfolded. Howie says no practice makes perfect. Martina says her heart was in her throat, she was fully engaged. Heidi loves to watch them. Simon loves that they are so interesting. Howie loved the drama.

Bensax International is a saxophonist. Heidi says that she heard if he makes it to the live show that the president of Haiti will also come to the live show, Richardson says yes. Mel B loves his personality, it exudes confidence and the whole performance made her feel so good.

Oliver Graves is a stand-up comedian. Howie is standing up with the audience, he says that Oliver is new and original and he loves him. Martina loved his timing. Simon thinks they will remember him and says his material is the right balance.

UDI is a blacklight dance group. A standing ovation and loud cheering from the audience. Mel B says they blow her mind every time she sees them, she loved it. Martina says she has never seen anything like that before, she loved it. Simon thought it was terrific and says this is why they made the show in the first place.

We Three is a family band, they are singing an original song about dealing with your demons and sometimes its ok, not to be ok. Mel B loves everything about them, the passion, the music, the words and she wants them in the live shows. Martina loved the first line and believes it was the best she has ever heard. Heidi loves them, says they are so humble and down to earth. Howie says they are beautiful, he loves them and thinks they are on their way to greatness. Simon says they need nothing from them but a platform because they are real.

The Sacred Riana is an illusionist and she completely creeps out Mel B and the other judges with her scary performance of playing with her doll. Mel B actually gets up and goes to her dressing room because she is so freaked out by this creepy school girl.

The performances over and now the judges are deliberating on who will move forward to the live shows.

Results, the acts advancing to the live shows: The Savitsky Cats, The PAC Dance Team, The Sacred Riana, UDI, Noah Guthrie and We Three.