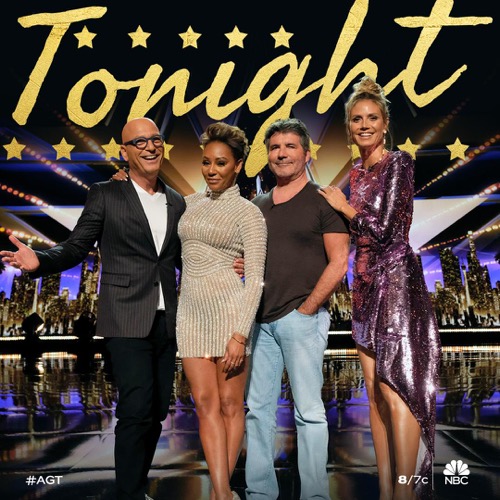 Tonight on NBC America’s Got Talent begins with an all-new Wednesday, August 22, 2018, episode and we have your America’s Got Talent recap below! On tonight’s AGT season 13 episode 14 “Live Results 2″, as per the NBC synopsis, “Winning acts advance in a results episode.”

Tyra opens the show with all 12 acts on stage. After the votes, only 5 acts will move forward. Tyra introduces the judges: Howie Mandel, Mel B., Heidi Klum and Simon Cowell. Tyra calls Makayla Philips, Da Republik and Front Pictures. Fans can save one of these acts. They are all in danger.

Tyra shows a clip of the fun had the night before in the Dunkin Donuts lounge. She reveals the first semi-finalist, Noah Guthrie. He thanks his fans for voting for him. With six spots left, Tyra moves on to the next semi-finalist. Voices of Hope has made it through. The group cries with happiness.

Tyra jokes with the judges and reveals Simon hooked her up on some blind dates. She shows some clips of her horrible dates that Simon spied on remotely, telling the men what to say. From one man who wanted to see her feet to another that could drink milk fast, Tyra’s dates went horribly.

Tyra brings a special act, The Illusionists to the stage to entertain.

Tyra calls two more acts forward, Samuel and Glennis. Surprisingly both of them will move forward to the semi-finals. Glennis is confused and starts to walk off stage until Tyra stops her.

Tyra announces more results. The next act moving on is Duo Transcend. The wife begins crying. Mel B. is happy they stayed.

With just two spots in the semi-finals, Tyra brings 3 acts back that all have been waiting in the green room. Da Republik, Front Pictures, and Makayla Phillips stand to find out if they will move on. Makayla will move on. Down to the last spot, but before Tyra reveals the last act, she shows clips of the next 12 acts headed to the stage next week to try and make it to the semi-finals.