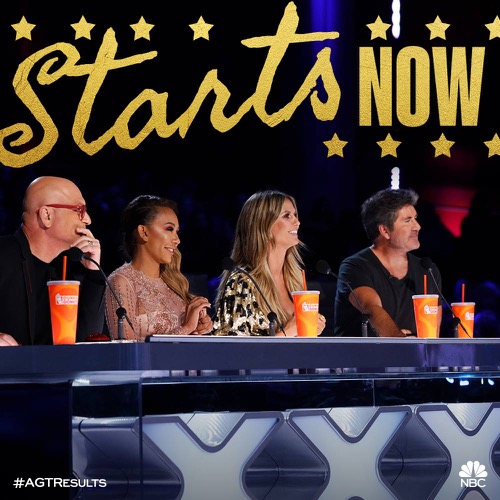 Tyra welcomes everyone to the live results show. She shows a recap of the live shows from the night before where Simon gives all of the talented acts a pep talk. Tyra introduces the judges: Mel B., Heidi, Howie and Simon.

The Top 5 acts from last night will move on to the semi-finals. The three acts in danger of going home are Aaron Crowe, Daniel Emmet, and the Future Kingz. Out of the three, America can save one of the acts.

Tyra shows a clip from the night before of the cast and crew celebrating in the Dunkin Lounge. Everyone is dancing, laughing and talking.

Tyra shows a clip from last week when Simon received his star on the walk of Hollywood Walk of Fame. The audience stands to clap. His son Eric comes to see him. Tyra introduces the cast of Beautiful for a performance.

On to more results. There are 5 spots left. Michael Ketterer, Rob Lake, and Christina Wells are called forward. The act moving on to the semi-finals is….Michael Ketterer. Michael isn’t the only one. Christina has also made it! She thanks Texas and her entire family.

On to the dancing acts, it is between Zucaroah and UDI. Zucaroah has made it through. Simon and Mel are pleased to see them win a spot.

Tyra welcomes back Aaron Crow, Daniel Emmet, and the Future Kingz. The act America put through is….Daniel Emmet. He is overwhelmed. He has been saved twice. He thanks the judges for the chance.

One more act to go through. Down to Crowe and the Kingz, it is up to the judges. Mel is up first. She picks Aaron. Heidi picks Aaron. Simon chooses The Future Kingz. On to Howie, he picks Aaron!