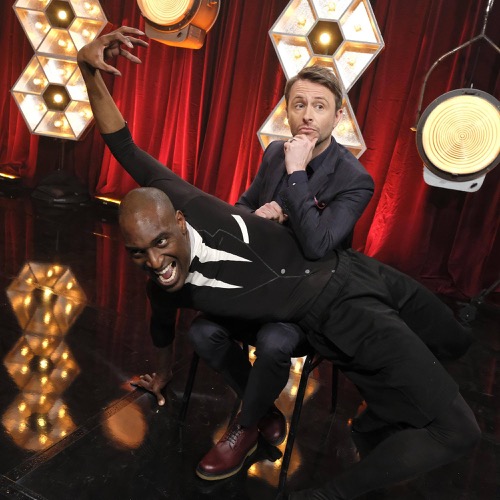 Tonight on NBC America’s Got Talent begins with an all-new Tuesday, August 7, 2018, episode and we have your America’s Got Talent recap below!  On tonight’s AGT season 13 episode 11 “Judge Cuts 4″, as per the NBC synopsis, “Comedian and TV host Chris Hardwick joins the judges’ panel for the final round of Judge Cuts and has the opportunity to send an act directly to the live shows with a Golden Buzzer. During Judge Cuts, contestants have one last chance to impress the judges before going live for America’s vote.”

The contestants were one performance away from the live shows. All they had to do was survive the final round of Judge Cuts on tonight’s all-new episode of “America’s Got Talent” to get to that point, however, nerves were beginning to set in. The contestants knew that only seven acts will be moving on to the next round and so they tried to make what could be their last performance something worth remembering. The first act of the night had been Brian King Joseph and he reminded every one of his story when he went before the judges. He told them that he suffered from a nerve disorder that would ultimately consume entire his body and this order will take away all physical feeling. And therefore when he performed tonight, he was in a lot of pain and couldn’t feel his fingers as he began to play his violin.

Brian was a skilled violinist. There was no doubt about that or his stage presence because he was quite a performer but, while the judges loved him, they also remembered that they were going to be viewing eighteen acts and so Brian’s performance might not be enough. The judges hadn’t wanted to raise his expectations only they had no problem at all with letting the next act know what they think of them. The next act was Yumbo Dump! The comedic duo was known for making noises with their stomachs that they called it body noises. They also really funny in a silly sort of way and so most of the judges had loved them. The one exception had been Mel B. She didn’t get the act and she didn’t understand why the others were so amused.

Like even tonight’s guest judge thought it was funny. Chris Hardwicke had known some Japanese and hadn’t been afraid to participate in the act. He had enjoyed himself with these two and he hadn’t been alone. Heidi said their catchphrase, Simon asked them to do whale noises, and Howie had promised to vouch for this act when it came time to deliberate because he loved them that much. So the judges weren’t afraid to disagree. They later disagreed on Academy of Villains. AoV was a dance group and they carried out their act tonight dressed as mimes. It was unique and Mel came to like this group while Simon pressed the ‘reject’ buzzer. He said that performance was something he would forget in the next ten minutes and so he hadn’t cared for the Villains.

Simon hadn’t really gone into why he found the act forgettable when the Villains yet he did expand on it after he watched Da Republik. Da Republik was another dance group and Simon had enjoyed their act more. He said that DR had personality and he told them that made them more likable, so Simon had favorites amongst the dance group which helped at least one group at ease. The next act had been thirteen Berlin. She was a singer and she had given a stronger performance tonight. The judges thought it was an improvement even if they weren’t that enthused by it. They didn’t get up out of their seat until they saw Sasha and Sergey. The father/daughter duo had truly impressed everyone last time with their trapeze act and this time around they made it more dangerous.

Simon had asked them if they could make it more dangerous and so tonight they brought it. They added even more ladders and they climbed higher than they did before. So their act tonight in which Sasha once again did a headstand on her father’s head had gotten scarier and scarier. The father climbed up high and had even walked across a ladder while Sasha was spinning hoops around her hands but, surprisingly, Mel had said that there were too good of act. She told them how she screamed in fright the whole way through and so the judges had a bit of a laugh about that because that was probably the best criticism any act could have wanted. And so Sergey and Sasha were called truly talented by the rest of the judges.

The next act, on the other hand, had resonated with everyone. Flau’jae was a teenage rapper who rapped about growing up amongst gun violence. She made her message a heartfelt one and the judges had been impressed. They were even more impressed tonight when Flau’jae showed at fourteen that she had more authenticity and honesty that some artists never gain. She had again rapped from the heart and was rewarded for that by Chris who pressed the Golden Buzzer. He said it was something she deserved and so she became the first act of the night to survive the Judge Cuts. The other judges hadn’t even complained about it because its what they would have done as well and so everyone was looking forward to Flau’jae’s bright future onstage.

The following act, however, was Elijah Holt. He was the young man with the blow-up animal that he rode on a trampoline and tonight his animal was actually blown up. It had been pretty deflated last time and so does the act properly had actually been impressive. He flew quite high, did several flips, and the judges had been left a little more impressed than last time. Another act that had been an improvement was Sixto and Lucia. The former couple had come up with a magic/ fashion show and tonight they had added to it. They had had a runway in which Lucia could change in under a second and had had several themes before ending their act dressed a couple on their wedding day. And sure some found it cheesy, only others had thought it cute and the judges still believe this couple should get back together.

Their romantic dreams for this couple were probably unlikely though next couple of acts were all singers. There had been Brody Ray. He decided to sing an original song tonight and unfortunately that had been a bad idea. The judges hadn’t cared for the song or the way Brody sang it. Afterward, there was Ronnie Lamarque. He sang a familiar song and not all the judges had liked that either. They said it sounded too much like karaoke. So then it was Glennis Grace’s turn and she did as the judges had suggested last time. The singer had taken a familiar song and had made it her own. She chose “Nothing Compares 2 U” and sang it beautifully. The judges had all loved and, out of all the singers, she was the only one that didn’t receive any negative comments from them. And that makes her act a rarity.

The judges had disagreed on almost everything. They disagreed when they saw Diabolowalker again because Simon hadn’t believed the group upped their game since they last saw them and so the other judges had argued with him. They thought maybe Simon was being too picky. Only a lot of people decided to rise to the challenge of Simon. There had been Troy James. He was a contortionist and he made things even more creepy. He brought in the music, had a judge volunteer for the act, and had proceeded to bend himself so out of shape that was it unreal. It was like Jekyll and Hyde with him. He was so shy and sweet when he was performing and then he just turned into a beast that could devour you.

Street Drum Corps had also tried to rise to the challenge and bringing in the fire hadn’t impressed Simon because he still didn’t think the band was any good though the band Nunnabove had actually sounded less like a wedding band. Simon had called them that during Auditions and they moved far away from that title with tonight’s performance. But no one tried to take on Simon more than Lord Nil. The escape artist had impressed all the judges last time and Simon had been the lone voice that said well what about. It turns out Simon had said what about alligators and so Nil decided to take that challenge. He brought in alligators for his scariest act. Tonight he planned on escaping a straitjacket while suspended up in the air over a pen of alligators. And for some reason, he also threw in the fire.

Nil’s suspended rope was lit on fire and every time a cord snapped he risked the chance of falling into that pen. So it was death defying and it scared everyone, including Lord Nil’s fiancée who had been shaken up and Mel who tried to press the eject button. The judge had hoped that the act would end after that and it hadn’t. Nil kept going until he eventually escaped and wasn’t maimed in the process. And so the judges had been more than impressed. This act had kept them on the edge of their seats and there was nothing else like it which means Lord Nil had nothing to worry about. The other judges had even stopped Simon from asking for anything else and so that’s it on Simon’s suggestions.

Thankfully, the final act of the night had been entertaining without the scare factor. Comedian Samuel J. Comroe was a funny man and he was funny once again tonight. The judges thought Samuel was probably their best comedians this season and so they were talking about keeping him for the live shows before they had begun to deliberate.

The judges had taken some time to think about things and they ultimately decided to send these six remaining acts to the live shows: Da Republik, Brian King Joseph, Lord Nil, Glennis Grace, Samuel J. Comroe, and surprisingly Yumbo Dump!