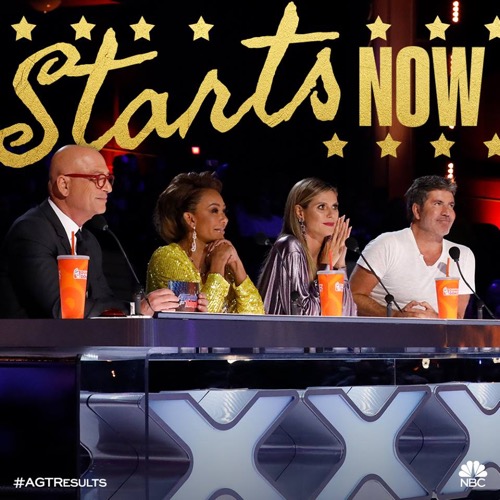 Tyra opens the show with the 11 acts all on stage. Six acts are headed home while only 5 will stay to compete in the finals. Before they start to reveal the results, Tyra shows a clip of last night’s performances.

The 3 acts in danger are Duo Transcend, Samuel J. and Voices of Hope children’s choir. America has 30 minutes to vote to save one of the 3 acts. Mel B. cannot believe these acts are in jeopardy. They are all great.

Tyra shows clips from the previous night when all of the acts celebrated in the Dunkin Lounge after the show. Tyra also shows a clip of what it is like for contestants during the show.

Tyra calls Shin Lin and Us the duo forward. The first act headed to the finals is Sin Lin.

Before moving on to more results, Tyra shows a clip of the judges being given an intelligence test for fun. Howie also goes undercover and tricks Simon with his fake hair and beard.

Tyra calls Mikayla, Michael, and Amanda forward. Michael has made it into the finals. There are only three acts left: Junior New System, Front Pictures and Zucaroah. They all step forward. America has voted for Zucaroah! Everyone goes wild.

Tyra has three acts from the green room to come to the stage. Samuel J. has won a spot in the finals! Now it is down to Duo Transcend and Voices of Hope. It is up to the judges. Heidi picks Voices of Hope. Mel picks Duo Transcend. Howie agrees and chooses Duo as well. Simon has no idea what he is going to do. He could deadlock the vote…and he does. It is a tie.

Now it is based on America’s vote and they choose….Duo Transcend!