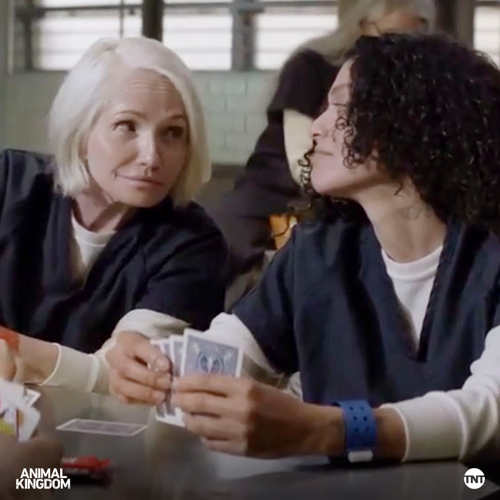 Tonight on TNT Animal Kingdom premieres with an all-new back to back Tuesday, June 4 season 3  episode 2 Animal Kingdom recap called, “In the Red.” On tonight’s Animal Kingdom season 3 episode 2 as per the TNT synopsis, “J struggles to keep the family business afloat after Smurf enlists him to make sure all the bills get paid. Deran makes his own moves independent of the family. Pope learns the ins and outs of parenting as he cares for Lena, and Craig makes enemies in Mexico.”

Tonight’s episode of Animal Kingdom looks like it is going to be great and you won’t want to miss it, so be sure to tune in for our live Animal Kingdom recap at 9:00 PM ET! While you wait for our recap hit the comments and let us know how excited you are about the season 3 episode 2 of Animal Kingdom.

Smurf’s protection in jail came at a cost! She had had J drop off payment when she first got sent to prison because that would guarantee no one would hurt her and as it turns out that had merely been one of the payments she owes these people because she had promised much bigger game. Smurf told them about Baz’s hiding spot and they had gone there finding it empty. It had been cleaned out and so Smurf had J drop off another payment because she couldn’t be seen to renegade on a deal. She talked to J and he did asked. He dropped off the money with little to no questions and then tried to put the entire thing behind him. J didn’t tell his uncles about the payment nor did he tell his girlfriend.

J remained silent and soon time passed. It would be months later that he would realize that he needed help and not anything that Nicky could provide. The teenager was out from under anyone’s thumb and had decided to party nonstop at the house. She left the worrying to J and he was concerned because the business wasn’t doing so well. He had been given Smurf’s power of attorney and was in charge of all the properties she owed, but the places weren’t bringing in the money they needed. J was trying to fix the problem by cutting costs where he could and it still wasn’t working. He knew that Smurf kept the whole thing running by using the businesses to clean the money that her family brought in and so J knew his options.

There was just one problem with reaching out to his family. The family had been left scattered after Baz died and they didn’t seem like they were getting together anytime soon. Deran was doing jobs on his own and even Craig was living the life down in Mexico with his girlfriend. They were both in good places and no one called or checked in. They weren’t even doing so with Pope. Pope was taking care of Lena and he wasn’t getting help with her. Lena was having problems in school because a couple of girls were bullying her about her father being a dead criminal and so Pope had no idea what to do. He was trying to do right by her and had needed someone to talk. And, well, the only person offering an ear was Lucy.

Lucy was sticking around because she was looking into Baz’s murder and so she occasionally had the chance to bring updates to Pope. Pope let it slip what was going on at school and Lucy had offered to help yet Pope turned the offer down because he thought he could do it all on his own and as it happens no one in the family were actually any good at going it alone. J was running out of money and he couldn’t afford to sell anything because that would give anyone investigating them what they needed to prove that Smurf’s businesses were a front. He couldn’t any big moves and he was starting to realize that even the family’s attorney would be willing to take him for a ride if he wasn’t smart.

J was also having a hard time paying off the gang that was protecting Smurf because there were more payments and so J visited his grandmother. She told him that he needed to pay the gang or else he won’t be asked nicely and he had tried to tell her that he was having a hard time making payments though she advised him to take another job and asked him why he hadn’t gone to his uncles. His uncles were always up for work and so J told her that they wouldn’t do it if they knew it was for her. Smurf was still suspected of having something to do with Baz and she was smart enough to realize the only way her boys would pull off another job was if they didn’t know she was still pulling strings.

Smurf told J to do what he had to and that he should also dip into his accounts in order to pay off her lawyer’s fees. Smurf reminded her grandson that he was like her and that he grew up hungry. He knew what it was like to go without and sleep in a car, so it was only natural that he had a Plan B and he did. J was hiding money at an old friend of his mother’s and he knew he would have to either dip into that or manipulate his uncles into working for him because the gang they’ve upset were the Trujillos. The gang sent someone to wait for J at the prison because he goes to see Smurf twice a week like clockwork and that meant the representative they sent to J followed him back to his house.

Meanwhile, Deran’s whole side business fell apart. He tried to put together a crew and it wasn’t long before one of them got picked up. Deran had had to bail the guy out and he had threatened him because he never wanted it forgotten that he too was a Cody. He said he’d kill anyone that risked him going to jail and so Deran wasn’t sure he should continue with the same crew if they were going to be making dumb mistakes. His brother Craig, on the other hand, was doing just well for him when he found a kid had broken into his apartment and was stealing for him. He gave the kid some money and threw him into the pool in front of everyone as a lesson not to steal from him. It wasn’t some big thing and so it didn’t turn into one until this kid went back to get some friends. The friends accused Craig of partying all night and causing the neighborhood to go to hell.

The parties were bad business for the nearby restaurants and so Craig was willing to tone it down, but these guys used that as an excuse and had gone there to beat up Craig. They attacked him and held back his girlfriend to ensure he wouldn’t get any help. So things quickly turned sour for Craig in Mexico! Back in the states, J ended up cheating on Nicky with the girl he handed the money to and he returned home to find out he had been a little too late for family dinner. The guys come together once a week to have a family dinner for Lena’s sake and J had felt bad about missing. Its just things were getting desperate and so he decided to be upfront with his uncles. He told the cops were coming after all of them.

The cops didn’t have a case against Smurf. They were just trying to keep in her jail long enough to find evidence against her and the others. That’s why they needed to keep everything running smoothly and so J told them that unless they did another job they would lose all of the businesses. He was telling Deran and Pope how they need to trust him for another job when Craig returned home. He had been robbed of everything and he too needed to pull off another job!

The Codys were getting desperate on tonight’s all-new episode