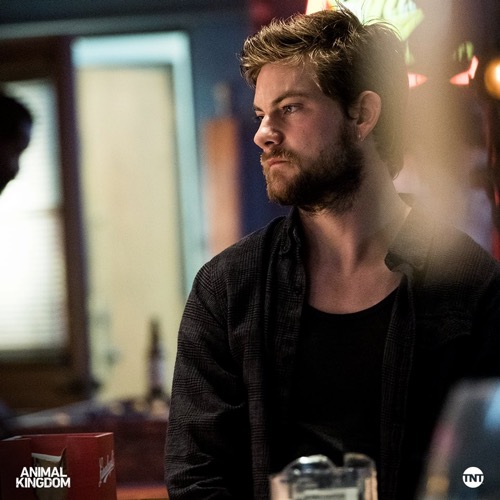 Tonight on TNT Animal Kingdom premieres with an all-new back to back Tuesday, July 31 season 3  episode 10 Animal Kingdom recap called, “Off the Tit.” On tonight’s Animal Kingdom season 3 episode 10 as per the TNT synopsis, “Tensions run high as Billy pressures the family to give him what he’s owed. Craig has a surprise meeting that makes him reconsider his future. Smurf comes to the boys with a proposal.”

Smurf still wanted her money. She knew that Lucy must have stolen it because Baz’s girlfriend was the only one that left town following his death and so Smurf tried to talk her boys into going to recollect the money. She told them how the money was something they all earned and that she would give them each their cut from the start, but they hadn’t wanted to take such a risk. Lucy was a big deal in Mexico. She was involved in everything down there from kidnappings, human trafficking, and even cocaine. Lucy had also shown how ruthless she could be when she killed a teenager and so none of the boys had wanted to take Lucy on. They thought it would be suicidal and had told Smurf so. And surprisingly that got her thinking that maybe she could pay off someone else who wouldn’t be as scared as her boys.

Smurf had a relationship with a local gang. They kept her safe in prison for a fee and she knew that were willing to do other things as well if Smurf was willing to pay them off, so Smurf made an offer. She gave the gang a down payment in return for them finding Lucy and getting her money back. The other side knew that Smurf could be taken at her word and so they agreed to do the job. They sent someone to Mexico and had their spy keep an eye on Lucy. Lucy, on the other hand, was running a business like normal and never noticed that she was being followed. She was too busy killing someone that had stolen from her and so the only one that suspected something was up was the one person that wasn’t involved – J. J noticed that his grandmother was up to something and decided to look into it.

J asked Mia to find out what was happening and she agreed to do it though she had wanted to be brought in as a partner and J was never going to allow that. He told her that instead, he’ll set her up with an apartment because he spotted that she was sleeping in her car and knew that a roof over her head would probably serve Mia better than anything else. Mia admitted that she did need a place except she also needed cash and she needed that cash yesterday. She hadn’t been getting a lot of side “jobs” lately and so J said he could help. He later told her about this idea he had in which he buys a laundromat to help clean the money and he said that Mia could run the place for him. It would be giving her a reliable job and J hadn’t wanted much in return. He just wanted Mia to keep an eye on anything out of place with the gang.

J just knew Smurf was up to something and so he wanted to figure out what it was before it came back to bite any of them. J hadn’t told anyone else his suspicions because he was trying to handle everything himself and therefore he hadn’t been paying attention to anything else going on until Billy suddenly confronted him about the money. Billy has had Smurf whispering in his ear about how he was never going to get his cut of the money they stole because no one trusted Billy not go on a drug binge and that made Billy antsy. He thought if he could merely demand his money that J would give in and he had been thrown at first when J ignored his phone call. He thought J was being a little punk and had gotten worked up about the youngest of them holding all the money. And so when he saw him, Billy immediately went on the attack.

Billy had tried playing it cool and then lost it within seconds because it turns out he never really had it. He wanted his money and demanded it be handed over to him because he knew J wasn’t “cleaning” it like he had initially been told. Billy found out the money was at the storage locker from Craig because he pushed Craig’s buttons. Craig hadn’t been in a good place and anyone with common sense could see it. The younger man found out his ex-girlfriend was pregnant and that he wasn’t the father and, for some reason, Craig didn’t realize how much he liked the idea of having a baby with Renn until that stopped being an option for him. He had also been angry with himself because he ruined Deran’s relationship with Linc by bringing Linc into their world and so having an angry brother on top of being angry at himself had left Craig ripe for Billy.

Billy had made it seem that Craig was the one no one ever wanted around and so Craig revealed that the money was a storage locker. He said Billy should just go down there himself to get it and the only problem with that was Billy hadn’t known where the money was. He had tried looking through J’s room and hadn’t found anything, so he wait on the attack when he saw J. J had just pulled in when Billy pulled him aside and slapped him into some of the furniture. He demanded his money J told him he wasn’t going to hand it over. He explained to Billy they didn’t need a junkie with too much money in his pockets to get picked up and so Billy couldn’t shake J. J had remained calm and had gone back inside the house because he hadn’t been afraid of Billy. And Billy had been so upset by that, that he tried taking his anger out at Pope of all people.

Pope had come by the house because he was finally ready to ask for help. He told his mother that Social Services had taken Lena away from him and that he hadn’t been able to get her back or even find out where she was. Pope had been so desperate for any sort of news that he had asked his mother for help and Billy had made fun of him for it. Billy had called Pope a Momma’s boy and was laughing at him when Pope snapped. Pope beat up Billy and had nearly drowned him until Smurf intervened. Smurf called Pope off and Billy wisely realized he should leave town before Pope tried to kill him again, but before he left he managed to sneak into Deran’s safe at the bar and he stole all of his son’s money.

Deran didn’t find the letter until hours later and afterwards he told his mother about it because he figured this was what she wanted.

Smurf revealed that she never wanted Deran to find out what sort of man his father was because Billy had kidnapped him when he was younger and had held him for ransom until she paid him with cash as well as drugs. So in her own way, Smurf had tried to protect Deran from the truth because she hadn’t wanted to hurt him and in a lot of ways she hadn’t wanted to hurt any of them. She later took Pope to see where Lena was staying and it turns out Lena had gone to a good home. There were two parents who lived in a nice house and had a swing in their backyard. It was a great place where Lena landed and Smurf had wanted Pope to know that before he made his next move. And while Smurf was no saint, she at least made a good decision when she kept them far removed from what she was doing with Lucy because there was no way Lucy was ever going to forgive Smurf kidnapping her brother.