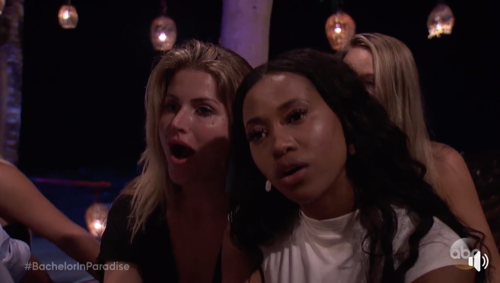 Tonight on ABC after weeks of drama, romance & more Bachelor in Paradise airs an all-new Monday, August 20, 2018, episode and we have your Bachelor in Paradise recap below.  On tonight Bachelor in Paradise Season 5 Episode 4 as per the ABC synopsis, “A distressed damsel confronts the man that deceived her by kissing another woman, who then joins them for an awkward conversation. The shocked bachelorette realizes that she still hopes her original love interest will prove to be her guy. So, when a newcomer with a date card steals away the dreamy football player for a conversation, it unnerves his former flame who fears what he would do if he were to get asked out on a date.”

Tia sits down with Chris for a talk and tells him that she found that he was making out with Krystal. Chris says it meant nothing and its not like he would go on a date with any other girl. Chris says he knows what he wants, then Krystal walks up and interrupts. Tia tells Krystal that they are in a triangle, that Chris told her that he was into her and then kissed her as well. Chris then says that he did it because he was confused because he didn’t know how Tia felt about Colton. Krystal doesn’t like the whole situation and doesn’t want to be a part of it. Tia is making herself clear that she is pulling herself out of the triangle, Chris tries to save face and says he was going to pull out anyway. Tia leaves. Krystal is relieved because she actually had a special spark with Chris.

Krystal was so excited and giddy about Chris but now she wonders about what he did to Tia.

Tia is thinking back to Colton and realizes now that she wants to date him. Jordan tells Tia as long as she and Colton are on the same page, then date Colton.

Another new girl arrives in Paradise, Jacqueline from Arie’s season and she has a date card. Jacqueline talks to Kendall and Jenna, they tell her to ask Colton on the date.

Tia is talking to Colton and Jacqueline walks up and asks to speak to him, Tia says that she is about to lose her mind.

Jacqueline tells Colton she is there to find something new but she is not exactly sure what that is. Jacqueline asks him if he will go on the date with her, he says no because it wouldn’t be fair to her because so much has been going on with him the last few days.

Jacqueline asks Kenny out for the date and he doesn’t care that Colton said no first. In the meantime, Analiese likes Kenny and she is hoping there are no romantic sparks. The two start talking about each other’s families. After their dinner, there are fireworks and the two head down to the water where Kenny leans in for a kiss. Kenny and Jacqueline return, with her piggy, back on top of him.

Jubilee is hoping that John gives her a rose, she is worried that Caroline might get it. Jubilee takes John aside in the hopes of securing that rose for her. Then, when Caroline sees John alone at the bar, she goes over and asks him down for a swim in the dark – she kisses him.

Krystal tells Kevin about what happened with Chris, she tells him that she doesn’t know if Chris is for her. Chris walks up, Kevin leaves and he leans in for a hug with Krystal and he tells her not to worry about getting a rose.

Chris and Krystal spend lots of alone time and share their feelings, Krystal is happy and hopeful.

The next day, Tia is talking to Krystal and confides in her about her feelings about Colton. Tia says she wants Colton, its that simple and she is afraid that he will go home and she will not have the chance to see if there is anything there.

Bibiana is talking to Colton and tells him that he is lucky that Tia likes him and he should be pursuing it. Colton says that it is just easy with Tia, they have great conversations. Bibiana tries to encourage Colton to go after Tia, she goes on to say that she thinks Tia is madly in love with him.

Colton has two choices, go home or pursue Tia. Colton goes to speak to Tia, they head off to the beach together. Colton tells her that he feels there is pressure on both of them to work out things between them. He says that hurting her scares the crap out of him and he is not there to date anyone else, the two of them have to give them an honest go. Colton and Tia kiss, Tia is thrilled and tells him that this is all she wanted, an honest chance.

Time for a cocktail before the Rose Ceremony, Chris H.comes in and tells the women to work at getting a relationship otherwise they could be going home.

Jenna and Jordan are enjoying time together and he is nervous that he may just fall in love with her.

Caroline is with John and she likes him because she can just be herself with him. John says that he likes that he can be vulnerable to her.

Jubilee has her alone time with John and she goes in to give him a massage and when he takes his shirt off, she is impressed.

Bibiana thinks the night is weird, there are the established couples and then there is her, she doesn’t think she is going to get a rose. Bibiana goes to see Kenny, she puts herself out there to see if there is even a possibility of getting a rose from him.
[2018-08-20, 10:02:13 PM] Rosie LeBlanc: It will be interesting to see who Kenny give his rose to since he is making up with three girls, one after the other.

David is alone with Jenna and gives her a gigantic stuffed dog for her birthday. Jordan walks up, grabs the dog and throws it into the ocean. Jordan and Jenna sit down, he tells her that it looked like something when she was with David and he didn’t like it. Meanwhile, Annaliese goes to rescue the stuffed animal and take him out of the ocean. David tells Jordan that it was just a gesture. Chelsea tries to say something to Jordan and he tells her to shut the F up and that she is sitting beside a girl, Jubilee, that is going home.

Annaliese goes to see Jordan and tells him what he just said to Chelsea and Jubilee was not ok. Eric tells Jordan that he should apologize. Jordan heads off by himself while Jenna speaks to Annaliese and tells her she doesn’t like the way Jordan blew up and if this speaks of his character, she is not sure if she will accept a rose from him.

Jordan returns to the group and Eric, in front of everyone, tells him that he owes the women an apology. Jordan apologies and says that everyone doesn’t know the history he has with David. Chris H. returns and tells everyone it is time for the Rose Ceremony.

The men are handing out the roses, there are 9 men and 13 women, 4 women are going home.

Jordan is first, he offers his rose to Jenna accepts. David to Chelsea, Kevin to Astrid, Chris to Krystal, John to Jubilee, Joe to Kendall, Colton to Tia, Eric to Angela, Kenny to Annaliese.