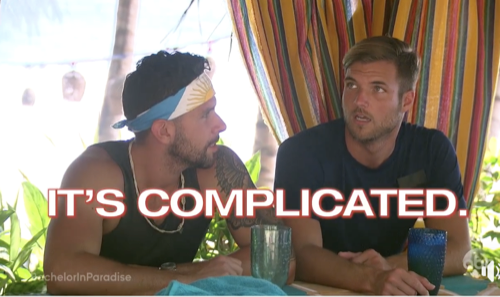 Tonight on ABC after weeks of drama, romance & more Bachelor in Paradise airs an all-new Monday, August 21, 2018, episode and we have your Bachelor in Paradise recap below.  On tonight Bachelor in Paradise Season 5 Episode 5 as per the ABC synopsis, “The women are handing out the roses, and they are ready for some new options. A hunky ladies’ man walks into Paradise with his long locks flowing and asks out another fair-haired beauty, even though she is seemingly part of a happy couple with everybody’s favorite grocer. To everybody’s surprise, including her concerned beach beau, she says yes, and goes out with the would-be Fabio.”

Joe thinks he is falling in love with Kendall and he is very excited. Meanwhile, another new man in the house, Leo. The women are very excited about Leo and Kendall admits she is really attracted to him; she and Joe go to say hi to him, Joe says that he is not intimidated. Leo has a date card. He chooses to speak to Jenna first and Jenna admits, if he asks her on a date, she will go. Next, Leo spends time with Kendall, the two lie on the beach and Leo tries to make a connection with her. In the meantime, Jordan is convinced that Jenna will be loyal to him and not go on a date with Leo.

Chelsea asks Leo to go for a walk, she is physically attracted to him. Leo is enjoying his time with her as well but there doesn’t seem to be much of a connection between the two of them. Chelsea, on the other hand, was melting just speaking to him.

Joe doesn’t care what Leo does, he is there for Kendall and is not going to get worried about him.

Chris, Jordan, and Joe look worried, in the end, Leo asks Kendall to go on a date and she says yes. Joe looks like he is drying inside, Tia feels sorry for him because she believes his feelings are real for Kendall. Kendall goes to speak to Joe, she tells him that she thinks it will be detrimental to herself if she doesn’t go, Joe kisses her goodbye. Joe gets up and goes to get a drink, Kendall goes on her date. Jordan thinks it is ridiculous that Leo asked Kendall on the date.

Leo and Kendall are on their date, the two are going to be on the cover of an author’s romance novel and he is there to take the photo. Leo dresses up in a cowboy shirt and hat and swoops Kendall into his arms for the photo, the two have to pretend they are in love.

Kendall goes in for a real kiss and Leo says the chemistry was fantastic between the two. Kendall loves her date with Leo and is trying to focus her attention on him.

Jordan and Chris are talking about Kendall and Joe, Jordan is on Joe’s side and says that he deserves love.

Leo and Kendall are getting along well, she tells him that she is really attracted to him, they seal it with more kisses.

Joe doesn’t feel threatened, he feels like he could have had love with Kendall and believes their bond is strong enough to make it through one date with Leo. Jordan tries to console Joe and tells him that everything is going to be fine.

Kendall returns and goes right in to see Joe. She tells him about the photo shoot and how they had to dress up, she had fun. Joe tells her that he was bored, spent the day by himself. Kendall says that she liked Leo and he is a lot like her. Joe asks if they made out and she says yes. Joe is not happy but tells her that he would still like to keep going with her. Kendall reveals that she wasn’t expecting to feel anything for Leo.

Joe is pretty unhappy, he sees a future with Kendall, but right now he doesn’t know how it looks for him.

Joe tells Jordan that Kendall was kissing Leo and he doesn’t like it. Jordan admits that he wouldn’t like it either.

Kendall confides in Astrid about her date with Leo, she calls him grounded and she felt safe with him. With Joe, she admits she cares about him, but she wonders if it can survive outside of Paradise. Deep down, Kendall admits that Leo can be long term.

Leo is out flirting with Chelsea, he tells her that he is not exclusive with Kendall, they just went on a date. Chelsea and Leo head down to the hot tub and he kisses her.

The next day, the guys are talking about Kendall when she walks up. Chris asks to hear about her date, Joe says he already heard about it. Leo walks up and says good morning. Chris turns to Kendall and tells her that she would be crazy to give up Joe. Kendall heads over to Leo and the two are alone, he says that what he feels about her is strong enough to see where they can go. Leo tells her that if he sees her kissing Joe he is going to be jealous. Kendall tells him that she needs to figure things out.

Colton gets a date card, he chooses Tia and she is excited because this is their first real date; she hopes they become a real couple after this.

Colton and Tia head to the city, they find some music playing and they dance. Raven and Adam show up and they play musical chairs with Colton and Tia who win. Tia and Raven spend some alone time, Tia reveals that she and Colton are getting closer. Raven says that she doesn’t think that Colton’s feelings are real and she is concerned, she doesn’t want Tia to be heartbroken.

Raven says that she wants Tia to find someone who treats Tia like Adam treats her and she shouldn’t settle for anything less.

Colton and Tia are alone, she tells him that Raven is very protective of her because they have both dated terrible guys who did not treat them well. Tia says she doesn’t want to have heartbreak again, Colton says that is not the case with him. Tia says that she would rather he hurt her feelings with the truth. Colton says that he is not going to entertain the thought of any other women, she is his girlfriend; they are officially boyfriend and girlfriend.

Jenna is still thinking about Jordan’s anger and wants to take a step back.

Another new man in paradise, it is Benoit from the Winter Games. Jenna thinks Benoit is hot and wants him to talk to her in French. Benoit has a date card, it says it is time for him to find love again. Chelsea is interested in Benoit, so are some of the other women. Benoit goes for a walk with Kevin, who tells him that Tia and Astrid are off the market, but their rest of the women are fine. Kevin tells Benoit that Krystal is cool and he should ask her for a date. Benoit calls Krystal for a chat, Chris is jealous and worried because he has all his eggs in one basket. Meanwhile, Jenna is so hoping that Benoit finds her, and he does. The two go over for a walk, Jordan has his eye on the two of them. Benoit likes Jenna’s vibe and energy.

Benoit steals Jenna off again and asks her to go on the date with him, she says yes and they hug it out. Jordan overhears and he is not happy.

Jordan feels like he is such a good match for Jenna and he is really upset. Jenna is dressed in a black tight jumpsuit, looking fabulous. Benoit arrives, Jenna leaves with him for the date; they head to dinner in town.

It doesn’t take long for Jenna and Benoit to be kissing and really enjoying each other’s company. Jordan, on the other hand, is super jealous and making little wisecrack comments.

Jenna and Benoit return, Jordan is sitting by the pool alone and asks to speak to Jenna alone. Jordan goes down to the beach with Jenna and he has written in the sand, I’m sorry. He goes on to say that he respects her and that he is very sorry. Jenna tells him a lot happened, Benoit is very opened with his feelings and she had a really good connection with him – she doesn’t know what is going to happen and needs to figure it out. Jordan says he wants to leave with her that he is attracted to her and she is wonderful, she deserves someone that would do anything for her and if it takes losing the battle to win the war, it is ok. Jordan gives her a kiss on the forehead and heads to bed.

Jenna is conflicted, she doesn’t know what to do.