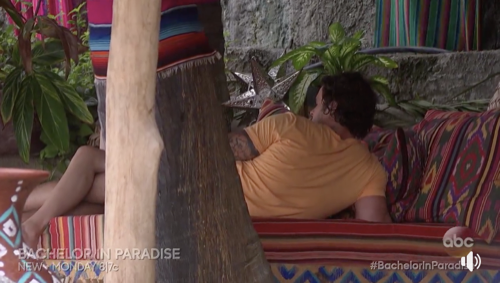 Tonight on ABC after weeks of drama, romance & more Bachelor in Paradise airs an all-new Monday, August 28, 2018, episode and we have your Bachelor in Paradise recap below.  On tonight Bachelor in Paradise Season 5 Episode 6 as per the ABC synopsis, “A fickle female bounces back and forth between the male model and the French-Canadian; a new arrival refuses to take no for an answer when he’s turned down for a date by a woman who fell for his friend before he could get there; a bachelor leaves Paradise early, leaving behind a woman who is desperate to find another man looking for all the love she has to offer, and a newcomer may fit that description.”

It’s a new week, things are heating up; couples that are hooking up are Colton & Tia, Chris & Krystal, Kevin & Astrid, Kenny & Anneliese, and a love triangle with Joe, Kendall, and Leo. Jenna went on a date with Benoit and Jordan is scared. Benoit doesn’t like drama and hopes that Jordan isn’t going to bring any, Kevin says that Jordan is probably burning a Canadian flag right now (Benoit is Canadian.) Jenna walks up and asks Benoit to go off with her for a talk.

Jordan tells Joe that he and Jenna are in a good spot. Jordan apologized the evening before and he believes it went a long way. Joe and Jordan talk about how they are both serious men and if they get engaged it is for the long term. Joe is talking and Jordan can’t hear anything, he is watching Jenna and Benoit make out down on the beach. Jordan is upset, he was serious about Jenna and she is throwing herself all over Benoit. Jordan feels sick, he wants to talk to Jenna again.

Krystal and Chris talk about marriage, she says he makes her glow. Chris thinks they are the strongest couple in paradise.

Another new guy arriving in paradise, it is Connor from Becca’s season. Connor has a date card and he is looking forward to spending time with Krystal.

Connor arrives on the beach and everyone is smiles. Connor pulls Krystal to the side to talk to her. Krystal then goes to speak to Chris and tells him that she spoke to Connor and told him that he should ask one of the other girls on a date because she would only be thinking of Chris. Chris is shocked and really happy.

Connor is still trying to get Krystal on the date with him.

Krystal goes to speak to Chris and asks him what he would feel if she went out with Connor. Krystal says she wants to make sure she is making the right decision with Chris and will know that if she goes out with Connor. Chris says ok but he doesn’t like it, he doesn’t understand why she needs to do this.

Chris confides in Benoit and Jenna about Krystal, saying he doesn’t know why she had to go out with Connor. Benoit agrees and says it is wrong – this is hilarious! Benoit did the same thing to Jordan. Chris is so distraught, if Krystal switches, he declares to Joe that he is going home.

Meanwhile, on the date, Krystal and Connor are having their minds and spirits cleansed. Connor leans in for a kiss with Krystal and she goes for it.

Jordan knows that he is losing Jenna, the wind turned. Jordan sits with Jenna and tells her that he felt something with her, it was like a magnet and he scared that he will never meet anyone ever again that he feels that way about. Jordan goes in for a kiss and she goes for it. Jenna then goes to Benoit with the intention of telling him that she is with Jordan and he starts kissing her. Jordan walks down to the beach and sees Jenna making out with Benoit.

Jordan speaks to Benoit and asks him what is going on. Benoit is not interested in the conversation and feels like Jordan is acting like a kid.

Kenny really enjoys her time with Annaliese, he breaks the news to her that his daughter has a recital and he wants to leave the show to attend it. He goes on to say that he really enjoys his time with her and he is not leaving her, he is going to his daughter. Kenny says his goodbyes and leaves.

Krystal and Connor are back, Chris asks to speak to Krystal.; she tells Chris that she had a good time but she is so tired that she would prefer to speak about it in the morning.

Julie leaves Paradise first thing in the morning after John tells her that he only wants to be friends.

Annaliese feels done, all she wants to do is find love and she has nobody to give it to.

Another new guy in Paradies, Kamil from Becca’s season and Annaliese’s face lights up like a Christmas tree. Kamil has a date card, he asks Annaliese to go for a stroll with him.

Annaliese and Kamil chat and she puts herself out there, she tells him that if he asks her, she will go on a date with him.

Kamil then chats with Krystal, then Chelsea and back to Annaliese who he asks to go on the date with him.

Kamil and Annaliese go driving in a dune buggy. The two then go swimming in a pool of water with a waterfall.

Chelsea confides in Kevin, tells him that maybe this is not the right process for her, she was really attracted to Kamil and he chose Annaliese. Chelsea feels just as lonely here as she does at home when she is not with her son.

Kevin tells Astrid that he kind of wants her to go on a date with another guy because she has only been with him and he feels that’s not the real world. Astrid can’t process what he said, she feels it doesn’t make any sense and she wants to go home. Kevin explains himself and says he is just worried because this isn’t the real world and he just doesn’t want to go back home and she leaves him. He has had two breakups and feels like he is just waiting for the storm to come again, he feels damaged. The two make up.

Jordan is alone with Jenna, she asks him if he is looking for marriage. Jordan says yes and he says he has a connection with her and if it doesn’t happen between them, he is packing his bags and leaving. Jordan tells her that he could fall for her, but Jenna is not taking him seriously, it is actually really sad the way she is acting with him. At the end of the day, Jenna has to choose one man, she wants to choose Jordan. Jenna goes to speak to Benoit and tells him that she can’t be 100% with him, he says it’s not cool to hear, but its ok. Benoit is shocked, he can’t believe that she would pick Jordan.

Kendall loves being around Joe, but her heart is with Leo and she just can’t explain it. Meanwhile, after Leo’s date with Kendall, he kissed Chelsea and the only person that doesn’t know is her until Kevin lets it slip. Kendall then confronts Leo about his kissing Chelsea. Leo tries to talk himself out of it, but Kendall stands her ground; Leo considers kissing like a handshake in Paradise.

Leo is on a warpath, he wants to find out who told Kendall and he is not going to stop until he finds out. Leo is making a scene. Kevin goes to see Leo and tells him that he told Kendall, but he thought she already knew. The two start getting into an argument because Leo thinks he can kiss anyone he wants. Kevin says he is not fair to Kendall.

Leo and Kendall talk, he tells her that she ruined his day by making him feel like he did something bad for kissing Chelsea. Leo tries to backtrack and get himself out of this and Kendall feels like he is being condescended. Leo calls Kendall a phenomenal actress.