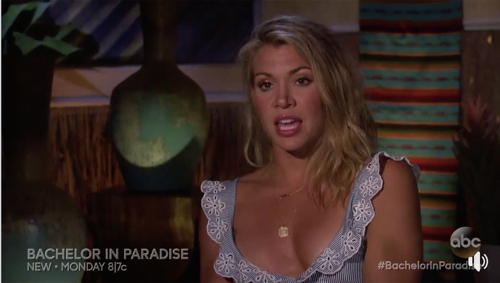 Tonight on ABC after weeks of drama, romance & more Bachelor in Paradise airs an all-new Tuesday, August 28, 2018, episode and we have your Bachelor in Paradise recap below.  On tonight Bachelor in Paradise Season 5 Episode 7 as per the ABC synopsis, “A guy feels reassured about his relationship after standing up for his love, but then his free-spirited girlfriend kisses another man on the beach; the early exit of a misguided young man leaves four candidates campaigning for the rose of the only independent woman, who chats with all four contenders to see if any of them show promise; a seemingly trustworthy fellow who just went all in on a relationship agrees to go on a date with a newcomer.”

Looks like Leo is not going to get a rose from anyone, he has turned all the ladies off with his aggressive behavior.

Benoit is not happy, he really had a good time with Jenna and can’t believe she is going to give her rose to Jordan and not him.

Jenna is upset, she has an argument with Benoit because she says she is not good enough for her and he says that she can’t decide what he wants. She confides in Jordan and also tells him that Benoit yelled at her. Jordan confronts Benoit who doesn’t react but thinks Jordan is nuts.

Benoit moved on, he is already making out with Chelsea in the hammock.

Jenna comes in and announces that there is a new date card. The car is for Eric and he immediately chooses Angela.

Kevin plans a date night of his own with Astrid down by the beach. Astrid feels like they are stronger since their argument the day before.

Angela is really excited about her date with Eric, he makes her feel wanted and appreciated. The two enter a beautiful luxurious suite, with jacuzzi, champagne and a golden toilet! The doorbell rings and it is a mega huge ice cream sundae. The doorbell rings again and its a cheese cart, equipped with their own butler.

Back in Paradise, Chris is making Krystal his main priority, she is the only girl he is after and he wants the rose from her. Chris prepares two yoga mats and the two do yoga together. Chris is sweating buckets and Krystal giggles that he is not a yogi.

Joe is confident in getting Kendall’s rose. John has no idea if he is going to get a rose, but he wants to work on his relationship with Kendall. Leo tries to stir the pot with Joe, asks him what he thinks about John spending time with Kendall, Joe says it doesn’t bother him because he is confident in his relationship with Kendall. Meanwhile, John kisses Kendall and she feels bad to have done that to Joe. Kendall then goes to Joe and tells him that John kissed her, but immediately afterward, she wanted to be with him and not John.

It’s time for the cocktail party and the women have the power, four men are going home. Leo makes a toast, he tells Kendall they had a great first date and it is one of the best dates that he has ever been on and it’s a shame that she is kind of full of it. Then he says he is looking around and says that there are a lot of people full of shit and tells Kendall good luck with grocery store bitch. Joe asks Leo to say it to his face, he does and fights breaks out when Leo throws his drink at Joe’s face. The fight gets broken up quickly and Leo is escorted away.

Chris H. comes in and announces that Leo is gone.

The only rose up for grabs is Chelsea’s, so the men at risk need to connect with her if they are going to stay in paradise.
[2018-08-28, 9:29:31 PM] Rosie LeBlanc: Jenna and Jordan are talking and he tells her that he fell for her the moment she walked down the stairs.

Connor makes his round on Chelsea, he asks to kiss her and she says yes. Benoit is next, Chelsea is his focus. Benoit plays the single mom card and tells her that he has dated them before and there is no issue.

Chris H. is back, time for the Rose Ceremony. Krystal starts, she offers her rose to Chris, Kendall to Joe, Tia to Colton, Jenna to Jordan, Astrid to Kevin, Annaliese to Kamil, Angela to Eric and the last rose belongs to Chelsea, she gives it to John. Benoit, David, and Connor are going home. Benoit is clearly upset, he is crying on the way to the car.

A new girl arrives in Paradise, her name is Olivia and she is from Arie’s season, she has a date card. Olivia first asks to talk to Joe, then Kamil, then John and she asks him to go on the date, he says yes. They crash a party for a 16-year-old girl with her family and friends and everyone has an amazing time. John and Olivia kiss, the two loved their evening together.

Yet another new woman arrives in Paradise, her name is Cassandra from Juan Pablo’s season. Eric is really attracted to her and so is Jordan. Cassandra asks Colton to go for a talk, but he tells her he is in a relationship with Tia. Eric is next, he tells Cassandra he is taking things slow with Angela and he is still open. Cassandra pulls Eric to the side again and asks him to go on the date, he says yes. Eric pulls Angela to the side, he tells he felt when he went to bed it was only her and when he woke up he wanted to test the waters. Angela is confused, Eric said he was all in and this doesn’t make any sense at all.