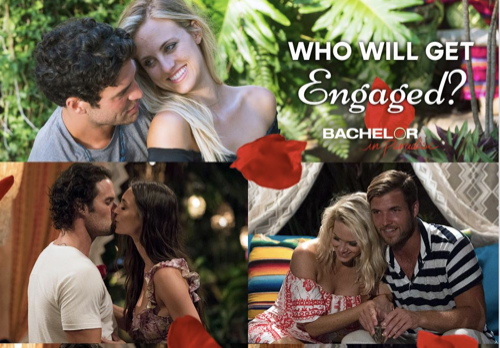 Tonight on ABC after weeks of drama, romance & more Bachelor in Paradise airs an all-new Tuesday, September 10, 2018, episode and we have your Bachelor in Paradise recap below.  On tonight Bachelor in Paradise Season 5 Episode 10 as per the ABC synopsis, “The first couple to come into focus enjoy a romantic date, which may be a dress rehearsal for their future, as a professional photographer takes potential engagement photos. Things go well until the female model is asked to change into a wedding dress, which rattles her more than she anticipated.”

The question seems to be is Shushana is a witch or not? Kamil is creeped out that she burned a photo of him in the fire.

Annaliese is happy with Kamil, she feels that they are both on the same page; the same thing goes for Astrid and Kevin, Joe and Kendal.

There is a new date card, this is for Jordan and he asks Jenna to go with him, his date card read, “get camera ready.”

Jenna and Jordan meet up with a photographer and the idea is that they are going to pose for their engagement photos. Jenna is nervous, Jordan calms her down. Next, the couple has to dress in wedding attire and they look fabulous together. Jenna tells Jordan that she is freaking out in the dress, she just wants to know that he is here all the way. Jordan assures her that he couldn’t even handle her walking away, there would no more romance in his life.

Another new man arrives in Paradise, Robby from Jojo’s season and he is coming late, but he has a date card. Robby makes the rounds with the girls and one of the women is Jenna, so Jordan feels the need to have a talk with Robby. By the law of averages, the only woman who really is not connected to anyone is Shushana.

Shushanna and Bobby leave for their date. Shushanna starts off by telling him that the people in Paradise think she is a witch.

Cassandra is with Aussie Jordan and she just hopes that he makes a move. Cassandra just comes right out and asks him, he does and she is so happy, she feels that they are now in a romance.

Joe starts to talk about getting engaged and Kendal starts to feel weird, she tells him she needs to sleep on it and goes to her room.

Time for the cocktail party, the men need to secure where they stand with the women.

Olivia and Diggy are dancing and John starts to get a little jealous and moves in on the two of them.

Olivia takes Shushanna aside and tells her that Bobby’s last relationship ended because he cheated. Shushanna can’t believe it, just when she thought she found someone to date. Shushanna goes to speak to Bobby and asks him outright if he cheated on Amanda, he says no but he has cheated in the past.

Kendal asks Joe to go talk, Joe says that clearly, something went wrong, she says yes. Kendal feels that the whole engagement thing is because they have to and not because they want to, furthermore, she loves him but she doesn’t feel that she is in love with him and she doesn’t know how he feels. Joe says that he loves her and he says he has held back because he has been giving her what she wanted. Joe says he is going home, he hugs her and says goodbye. Kendal is left there crying but Joe cannot stay if she is not on the same page as him.

Kendall leaves as well, they are both gone from Paradise.

The other couples are freaking out about Joe and Kendal, if they can’t make it, what chance do they have.

Time for the Rose Ceremony. Cassandra is first and chooses to give her rose to Aussie Jordan, Shushanna to Robby, Annaliese to Kamil, Astrid to Kevin, Krystal to Chris, Jenna to Jordan, Olivia to John. Diggy is going home.

The next day, Chris H. has an announcement. Tomorrow is the last day in Paradise. Tonight is fantasy suites for the couples that are serious, those who are not, should break up today.

John asks Olivia to the side so they can talk. John tells her that he really, really likes her, she is a breath of fresh air in his life. On the flip side, he doesn’t want to go into the fantasy suite but he would like to see where things go. John and Olivia leave together.

Cassandra and Aussie Jordan have a chat, he basically tells her there is no chemistry and he wishes her the best.

Shushanna and Robby agree that they will go out on a date when they leave Paradise.

Jordan and Jenna, Chris and Kendal all are going to the fantasy suite.

Kevin and Astrid sit down for a talk. Kevin tells her he is having a mental breakdown. Kevin is conflicted because he has been in a fantasy suite before and it didn’t end up well. He is also worried about them having different lifestyles, he feels that something is missing – he is at 80%. He is doing exactly what she asked him not to, to blindside her at the end. Astrid gets up and leaves,, she is so confused. Kevin leaves as well.

We started the days with 7 couples, now there are only 3. All the couples are in their fantasy suites.

Annaliese is trying to go slow so she doesn’t scare Kamil away. Kamil tells her that he is falling in love with her, they are on to something really, really great.

Jordan didn’t expect to fall so hard for Jordan, he has a decision to make. Jordan tells her that he is in love with her and he has a big decision to make, in his mind, he only gets engaged once in a lifetime. Jenna tells Jordan that she loves him too and he has no idea what he is getting himself into.

Chris and Krystal are enjoying the fantasy suite, she blindfolds him for some fun.