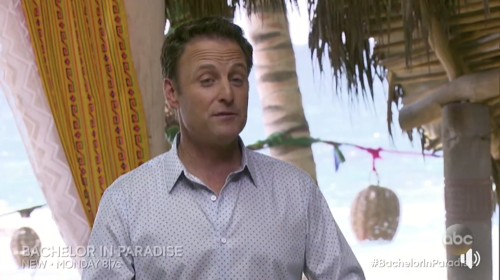 Tonight on ABC after weeks of drama, romance & more Bachelor in Paradise airs an all-new Tuesday, September 4, 2018, episode and we have your Bachelor in Paradise recap below.  On tonight Bachelor in Paradise Season 5 Episode 9 as per the ABC synopsis, “Two couples from Paradises past choose a couple to send on a spectacular date. The hitch for the lucky couple is that, needing a break, the visiting parents decide to send themselves on the date, leaving their infant daughters with their new, inexperienced babysitters.”

Astrid and Kevin are doing well, love is in the air and couples are stronger than ever. Jenna and Jordan are the perfect storms. Chris H. is back and he has brought some alumni couples with him; Carly and Evan, Jade and Tanner. These two couples both fell in love with Paradise and both have children. The two couples are going to pick which couple deserves the next date.

Jenna and Jordan are the first couples to be interviewed, Jordan does most of the talking. Astrid and Kevin do well, he tells about o their first real date she told him that she loved him. Kamil and Annaliese are a little different, Kamil is almost taking a step back and Annaliese seems all in. John and Olivia are funny, he says that she is girl number seven in Paradise that he has been with. Chris and Krystal do well, they look happy. Kendall and Joe are sweet together.

Kendall and Joe are chosen as the most deserving couple for the date. But, they are not going on a date, they will be babysitting the babies while the two couples go on a date and get some mommy-daddy time alone without the children.

To reward Joe and Kendall for their babysitting, the two will be heading into town for some time alone. They talk about dating other people and both don’t want to.

Jordan and Jenna discuss having children and start picking names.

Erica and Cassandra aren’t doing to well, she is trying but he is not reciprocating the feelings. Cassandra tells him that she doesn’t think he should be in Paradise, maybe it is premature because he doesn’t seem ready for a relationship. Astrid thinks Eric is missing Angela.

The truth is, Eric does miss Angela; guess he is forgetting that he sent her home and choose to stay with Cassandra instead.

Eric goes to speak to Cassandra, he tells her that he is going to leave and he is sorry.

Eric goes to see the rest of the guests and tells them that he is leaving.

There is a new date card, it is for Chris and he chooses Krystal to go on the date with him. Chris and Krystal are dressed and ready to go on their date.

Some of the rest of the guests play truth or dare down on the beach. Olivia takes a dare to kiss John with a habanero in their mouths.

Shushanna’s turn, she chooses truth and Annaliese asks her if she believes in love at first sight. Jordan from New Zealand asks a follow-up question, is there anyone in Paradise that Shushanna wishes she could have kissed. Shushanna keeps staring at Kamil and he is getting creeped out. Jordan asks Kamil if he is in a committed relationship and he says yes. Shushanna, on the other hand, believes that Kamil is into her and just doesn’t want to admit it.

Jordan and Shushanna are alone, he asks her what she wants from him. She says she is not ready to move on yet. Jordan tells her to press the restart button and just go with it.

Chris and Krystal are on their date, things are going well, she tells him that she couldn’t even imagine her life without him right now. Chris is about to tell Krystal he loves her when a raccoon interrupts them. He tells her, then she tells him and says that she is head over heels in love with him. There is a private concert for the two, they get up and dance on water.

Back in Paradise, it is a little weird that Shushanna just keeps staring at Kamil and Annaliese.

Jordan has a date card and wants to take Shushanna, but she tells him that she is not ready to move on and maybe he should ask Cassandra instead.

Shushanna asks Kamil to take a walk and talk. She tells him that she and Jordan talked, and he feels she has something towards him. Shushanna wants to have another date with him, Kamil says there is no connection, no spark. Shushanna says that things can change, Kamil says he doesn’t feel that in his heart.

Kamil is frustrated, he has no connection with Shushanna and she is not getting the message. Kamil tells Annaliese that he feels spooked by Shushanna because she always gives him an evil stare, like witchcraft.

Annaliese goes to speak to Shushanna, she rudely says, “do you have to.” Annaliese tells Shushanna that she and Kamil are strong and she needs to back off. Annaliese asks her if she is putting witchcraft on them, like spells.

A new guy arrives in Paradise, his name is Diggy and he is from Rachel’s season. Diggy first takes Shushanna to the side to speak to her, she tells him that she is still hurt by Kamil and could only be friends, so she doesn’t want to waste his date. Diggy is not into baggage, so that is it for Shushanna. Diggy then speaks to Olivia, asks her to go on the date, she says yes.

Olivia tries to cheer up Shushanna by telling her that she thinks she and Jordan make a good couple and she should try to pursue him when he returns from his date with Cassandra. Meanwhile, Jordan and Cassandra are having a very good time and connecting, probably not what Shushanna will want to hear.

Diggy and Olivia are on the date and the two share a hot and steamy kiss.

Shushanna has shifted her attention now away from Kamil and on to Jordan.

Shushanna is down by the beach, she has a photo of Kamil and she puts it in the fire.

Jordan is alone with Cassandra and Shushanna walks up and says she has something planned and would like Jordan to join her. Jordan agrees, Shushanna asks about his date, he says he really enjoyed himself and would like to pursue that more. Shushanna tells him that she was jealous while he was gone. Jordan looks confused and he tells her so. Jordan says he is motivated to now pursue Cassandra more. Shushanna says she has nothing further to say and walks away. She starts crying and Jordan goes after her. He tells her to not give up, she has so much to offer.