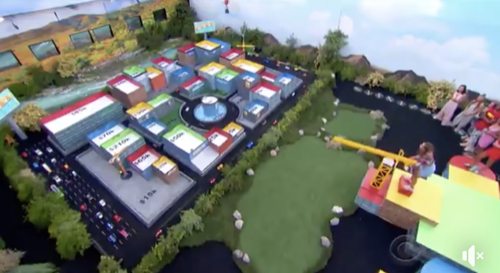 Tonight on CBS Big Brother airs with an all-new Sunday, July 22, 2018, episode and we have your Big Brother recap below! On tonights Big Brother season 20 episode 12 as per the CBS synopsis,“ Following a live vote, a Houseguest is evicted and interviewed by host Julie Chen. Remaining Houseguests compete for next Head of Household.”

So make sure to visit Celeb Dirty Laundry for our Celebrity Big Brother US recap between 8 PM and 9 PM ET.  While you wait for our recap make sure to check out all our BB20 recaps, videos, news, spoilers & more, right here!

The HoH competition continues. Brett is happy that he turned Rockstar into a target, he can’t stand her. Meanwhile, Rockstar is livid because she says it is a lie. The funniest thing about their standoff in the last episode is that she kept shouting and he just stood there with a straight face, no emotion. The rain falling onto the houseguests has turned to sticky sap. Tyler is really trying to hold on tight, if the rest of the house finds out that he flipped his vote, he is going to need the HoH. Rockstar is the first one to fall down and she is out of the competition. Faysal is the next one out. The trees are slanting more and more forward making it harder to hold on, Brett falls and Rockstar claps and shows that she is happy. Bayleigh, Angela, Rachel, Hayleigh and JC fall. Kaitlyn is don, then Kaycee. The last two are Tyler and Sam, Tyler falls down and Sam wins.

Tyler is happy that he is not HoH, this is good for his game. Meanwhile, Rockstar is still crying that she did no win. And Rockstar is crying again, this time alone with Bayleigh.

JC and Tyler plan on blaming Kaitlyn for Winston being voted out of the house. JC is trying to manipulate Faysal onto his side and turn him against his alliance. Faysal is so frustrated, he wants to know who is telling the truth and who is lying to his face.

Faysal goes to speak to Kaitlyn and tells her something is not adding up. Faysal tells her he doesn’t trust anyone, not even her. Kaitlyn starts crying, she tells him her heart is broken. Sam calls the houseguests to see her Ho room. Sam tells everyone that she doesn’t want everyone freaking out, there is no one on ones, she knows who she is nominating and she is not telling anyone. JC calls Sam’s time as HoH, the HoH dictatorship.

Kaitlyn believes that Sam had a power to change the votes in the last eviction to send Winston home. Kaitlyn shares her theory with Tyler, he tells her he has no idea what is going on and calls her a mastermind. Tyler is thrilled that nobody suspects him.

Rockstar tries to retaliate against Brett by banging a spoon on a pan and singing that she and Brett are best friends. Brett doesn’t look bothered, in fact, he claps his hands and smiles. Brett loves Rockstar’s reaction, she is acting like a child and really bothering everyone else in the house.

Bayleigh and JC get into a disagreement, she uses a word to describe short people and insults him, he in return uses a word to describe black people and she not only gets insulted but angry as well. JC was just trying to show her how he felt. JC then goes to see Tyler and tells him what happened, Tyler tells him to speak to Bayleigh and work it out. Faysal and Hayleigh explain to Bayleigh that JC was just trying to show her how he felt. Bayleigh and JC are alone, they talk it out, JC says he is sorry and tries to tell her that he was giving her an example of how he made her feel. Baleigh says that she didn’t need him to do that, she understood and feels like he was insulting her intelligence. The two go on and on, or more, she goes on and on, they make up.

Time for the nominations. The first person nominated is Hayleigh, the second person is Kaitlyn; she says because she believes they take the most from the house and contribute the least. Nor does Sam like the way the two treat the young men in the house, she thinks they deserve more respect. Hayleigh and Kaitlyn both go in the diary room and cry, they didn’t like Sam’s comments. Meanwhile, Faysal doesn’t like Sam’s comments. Brett is thrilled and hopes they can backdoor Rockstar.