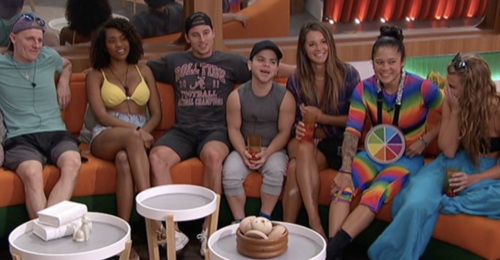 Tonight it is the first eviction of the summer, but there is a chance that nobody will be going home if Sam uses her power. Kaitlyn and Faysal have a very close friendship, meanwhile, poor Sam is back to being robot online. JC loves Sam and wants to keep her safe, in fact, he has a fake wedding with Sam the robot. Haleigh likes Faysal, she thinks he is cute, but lots of trouble. Meanwhile, Kaitlyn seems to be jealous over the time Faysal spends with Haleigh. The plan so far is to vote Steve out, but Tyler’s alliance needs one more vote and they are trying to get Kaitlyn’s vote without revealing the alliance.

Faysal and Haleigh are kissing under the covers when Kaitlyn walks in and is not impressed.

Steve tells Julie that he is shocked that he was evicted and that is his biggest mistake. Steve says he was fooled. He tired to go in as a quirky uncle, but he came off as a father, regardless, it didn’t work. Steve lied to his housemates, he never told him he was an undercover police officer, yet he spoke about police a lot. On the video message, Tyler lies his butt off by acting surprised that Steve is voted out.

Time for the HoH competition. The houseguests have to navigate a ball to land in the highest salary range. Kaitlyn has won by rolling her ball into a salary in 80K. I wonder how the game will change now that Kaitlyn is in power.