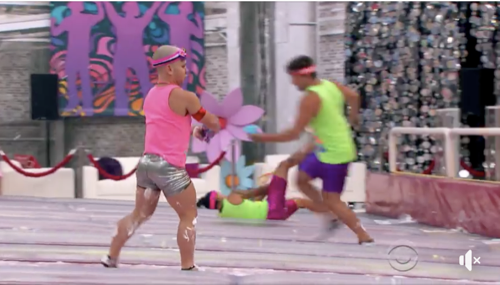 Tonight on CBS Big Brother airs with an all-new Wednesday, August 23, 2018, episode and we have your Big Brother recap below! On tonights Big Brother season 20 episode 26 “Live Eviction and HoH,” as per the CBS synopsis, “Following a live vote, a Houseguest is evicted and interviewed by host Julie Chen. Remaining Houseguests compete for next Head of Household.”

Brett won the Veto and Faysal has no idea who he is going to put up for a replacement when he takes himself off. Faysal tells Haleigh that she is being thrown under the bus by Scottie, he wants her on the block and called her Kaitlyn 2.0. Haleigh feels so stupid, she picked up for Scottie and now he throws her under the bus and attacks her.

Haleigh pours her heart out to Kaycee, Tyler and Angela, tells them what Scottie did – they all have a hard time keeping a straight face.

Scottie and Haleigh are alone together and he tells her that she should disassociate herself from him. He goes on to tell her that he put the plan in motion, he called her Kaitlyn 2.0. Scottie feels awful, his little plan was stupid, he honestly feels that only Haleigh had his back and he stabbed her in the back.

Scottie goes to see Faysal do some damage control, he tells him that he does not want Haleigh on the block. Faysal says that putting her on the block is stupid because she is the only one that had his back. Scottie goes on to say that he has a thing for Haleigh, he also mentions that Sam has been acting crazy so maybe he should put her on the block.

Time for the Veto meeting. Brent says he wants Scottie to give him a reason why he should use the Veto to save him. Scottie says that he is not going to waste his time with that, he says someone is playing everyone in the house and that is Sam, he reminds everyone what she has done in the house and says that she should be the replacement nominee. Brent says he has decided to use the Veto on himself, Faysal names Kaycee as the replacement nominee.

Faysal mentioned to Tyler that he wanted to work with him, so Tyler wants to use it to his advantage. Angela and Tyler go to speak to Faysal and Haleigh. Faysal suggests that the four of them should do a final four.

Tyler is alone with JC who wants to make sure that they are still strong since they have been aligned since day two. Tyler tells him to just trust and all will work out.

Tyler has made a lot of promises; his ideal final two is with Kaycee.

Time for the live vote, Angela is up first and she votes to evict Scottie, JC for Scottie, Tyler for Scottie, Haleigh for Scottie, Sam for Scottie and Brett for Scottie. Its official, Scottie is evicted from the Big Brother house.
[2018-08-23, 10:10:06 PM] Rosie LeBlanc: Scottie is with Julie, she asks him why he is there tonight. Scottie is not sure, he didn’t see it coming. Scottie thinks Faysal targeting him was strategic.

Time for the HoH competition. The game is called Sweet Shot, on Julie’s go, the houseguests have to search candy pits for a piece of candy with a token inside. They give it to Faysal, grab a ball and roll it down the conveyor belt. The first houseguest to land a shot in the red cup at the end becomes the new HoH. The can keep their score, 1 to 40 and hope that nobody lands the red ball in the cup, or decide to play again.