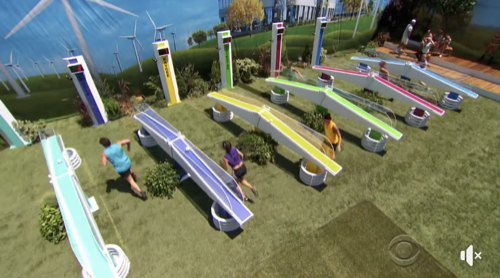 Tonight on CBS Big Brother airs with an all-new Sunday, August 8, 2018, episode and we have your Big Brother recap below! On tonights Big Brother season 20 episode 19 “PoV and Ceremony,” as per the CBS synopsis, “Houseguests compete to win the Power of Veto. During the Veto meeting, the winner of the competition can keep nominations the same, or save someone from eviction for the week. Hosted by Julie Chen.”

Tyler is out to find out who the hacker is and then go after them. Scottie doesn’t know why the hacker took him off the block, but he is thankful and hoping that he is not going to be backdoored.

Rockstar and Bayleigh are rumoring that Scottie is the hacker; meanwhile, there is no way Hayleigh is going to reveal that she was the hacker.

JC is nuts, he thinks Tyler is the hacker and put himself on the block as a strategy move – don’t know what JC is thinking!

Then JC goes to see Angela and Kaycee and tell them it was Bayleigh who was the hacker.

Faysal and Haleigh are talking about the hacker, she still hasn’t revealed that it is her.

The doorbell, it is former Big Brother houseguest, Jessie Godderz, or also known as Mr. Pectacular and he will be hosting the Veto competition.

The Veto competition begins, it is called Space Pecs. The houseguests have to roll a ball through a tunnel and run to the end to grab their ball, if they drop it they start all over again and lose all points accumulated. The first round is 25 points required, the person with the least will be out. Rockstar is eliminated and gets to choose a prize, she picks the Veto.

The second round is to 35, the person eliminated is Angela and she gets a gift, Jessie’s fitness and food plan for a week. Angela trades it with Rockstar and takes the Veto.

The third round is to 40, the person eliminated is Kaycee and she gets a gift, a Healthy Honolulu trip. Kaycee keeps her gift.

Fourth round and this one is for an exhausting 50 points. Brett is eliminated – his gift is The Health Nut, a mascot. Brett trades and takes the trip to Honolulu.

It is now down to Tyler and Scottie, Scottie tries to cut a deal but Tyler refuses, he is going for the Veto. This round is for 100 points. Tyler wins the competition. Scottie claims his gift, $5,000. Tyler claims his first place gift, Instagranny. Tyler gets to trade his gift, Angela promises that if he doesn’t take the Veto from her she will take him off the block. Tyler takes Honolulu. Angela has won the Veto.

Bayleigh is flabbergasted, she doesn’t know what Angela is planning.

Tyler and Angela are alone, she asks him if it was a good move and he says yes and that he trusts her 100%.

Kaycee is called to the diary room, she has to wear a peanut costume with to dumbbells all week, every time she hears the Space Pecs jungle she has to sing to it, for one week. Rockstar has to wear a workout outfit, do sprints and make shakes when she is told.

Bayleigh goes to see Angela and Kaycee, she wants to go over the possibilities, what Angela is thinking. She says to take off Rockstar, put Scottie up.

Time for the Veto competition, Angela takes off Tyler and reveals the identity of the hacker, she says it is Bayleigh and puts her up for the nomination. Bayleigh is in shock, Angela tells her that her power trip is over.

Angela made a huge move, it was a complete blindside.