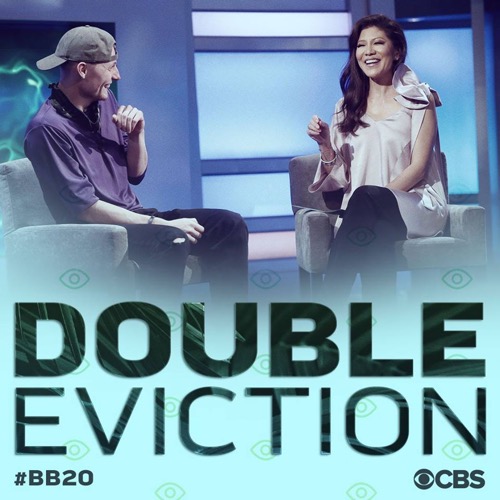 Tonight on CBS Big Brother airs with an all-new Sunday, September 13, 2018, episode and we have your Big Brother recap below! On tonights Big Brother season 20 episode 35 “Live Eviction and HoH,” as per the CBS synopsis, “Following a live vote, a Houseguest is evicted and interviewed by host Julie Chen. Remaining Houseguests compete for next Head of Household.”

Haleigh is sad because she knows she is going home. Kaycee, Brett, Tyler and Anglela talk game, the next two that are going to be voted out are JC and Sam.

Tyler has a final two with Brett and a final two with Kaycee and a show mance with Angela. On the bottom of the totem pole is Brett because he doesn’t feel like he can beat him, an he may even get rid of him before Sam and JC.

Julie announces that it is double eviction night, two people will be going home tonight. Time for the live vote, Tyler is up first and he votes to evict Haleigh, JC for Haliegh, Brett for Haleigh and Angela for Haleigh. Its official, Haleigh is leaving the Big Brother house.

Haleigh is with Julie who asks her why she was on the block for three weeks and couldn’t get the target off her back. Haleigh says it all started with Bayleigh. In the final messages from the houseguests, Angela and Kaycee through Brett under the bus and blame him for Haleigh going home.

Time for the HoH competition, this one is called Buffering. Earlier the houseguests all watched clips from the summer, for this competition Julie will play back the clips one at a time, but they will stop. The houseguests will be given two options of what happened next, the person who answers the most questions correctly, will win HoH.

Tyler wins HoH with six points, he has just a few minutes to strategize. Tyler goes in the Have Not room with Brett and says just stick to plan. The Nomination Ceremony is beginning, Tyler as HoH has to choose his two nominations, JC and Sam. The PoV competition begins right away, its called block and roll. The houseguests have to arrange a puzzle maze so that the ball they launch goes through the puzzle and out the other end. Angela wins the PoV.

Angela uses the PoV on JC. Tyler as HoH has to name a replacement nominee, he puts up Brett. Time for the live vote, JC is first and he votes to evict Brett, Kaycee votes for Brett, Angela votes for Brett. Its official, Brett is leaving the Big Brother house.

Brett is with Julie, she tells him that he got played. Brett says he was loyal to Level 6, he figured he was safe. Brett says he feels mostly betrayed by Tyler.