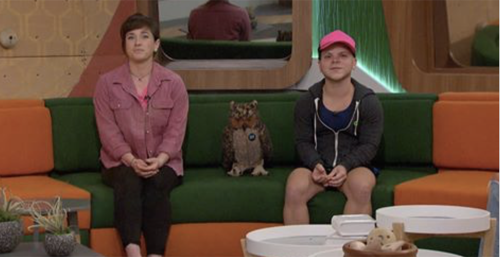 Tonight on CBS Big Brother airs with an all-new Sunday, September 20, 2018, episode and we have your Big Brother recap below! On tonights Big Brother season 20 episode 38 “Live Eviction and HoH,” as per the CBS synopsis, “Following a live vote, a Houseguest is evicted and interviewed by host Julie Chen. Remaining Houseguests compete for next Head of Household.”

Tonight Level 6 is fighting for their lives as they battle for the final PoV of the summer. Meanwhile, JC is thrilled that he won HoH and can’t wait to break up Tyler and Angela. Time for the Nomination ceremony. JC gets to nominate two houseguests for eviction. The first houseguest he has nominated is Angela, the second houseguest is Tyler. JC says that since the beginning he had her back and when she had HoH she threw him on the block, then he says to Tyler that he has been bitch.

In the jury house, everyone is getting along well, even though Bayleigh can be a little snappy sometimes. Haleigh shows up and everyone is watching a video of past competitions. Rockstar notes that Kaycee is playing a good game. Brett joins the jury house next, Rockstar thinks he is such a tool and going to ruin her jury house experience. The jury members watch another video and Brett tells them how Tyler stabbed him in the back. Haleigh thinks that Brett’s eviction was very well orchestrated. Bayleigh also thinks that Kaycee so far is playing the best game.

Brett hates being in the jury house, he has to look around and realize that he voted everyone one of these losers out. Sam is next to arrive in the jury house, she regrets trusting Tyler. Once again, they sit down to watch a video. Sam tells everyone that she felt very secure because she made a final two with Tyler, Brett speaks out and says Tyler had a final two with him too. Haleigh doesn’t dislike Tyler for anything in the game, so far she thinks he has had a really good game play.

It is time for the final Veto completion, in this one, they will be given a clue about the competitions played this summer. The goal is to land a ball in the thumbs up icon for the correct competitions. The last place finisher in each round gets a strike, the houseguest with two strikes is automatically eliminated. It’s time to play, “Down to the Wires.”

Kaycee wins PoV and just punched her ticket to the finale. Now, Kaycee has to decide who to keep with her in the final three, and who to send to jury house. Both Tyler and Angela get one chance to speak to Kaycee before she makes her decision on who to evict. Angela tells her that she knows it is a hard decision and no matter what, they are bonded and she is not campaigning. Tyler says nice things to Kaycee, Angela and JC – no campaigning from him either. Time for Kaycee to make her decision, she faces Angela and Tyler and casts her vote to evict Angela. It’s official, Angela is evicted and goes to the jury house.

Angela is with Julie and she is asked why does she think Kaycee evicted her and not Tyler. Angela says she doesn’t really know but she respects Kaycee’s decision. Julie asks about her relationship with Tyler, both of them have declared their love for each other. Angela says she is looking forward to what the future holds with Tyler. In Kaycee’s video message, she tells Angela that she had a final two with Tyler.