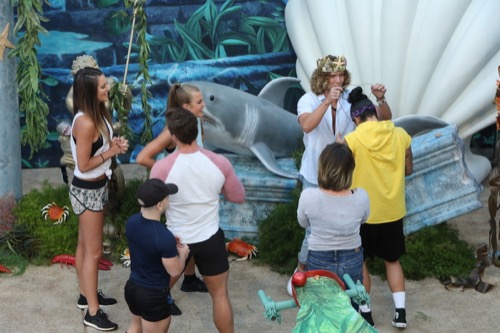 Tonight on CBS Big Brother airs with an all-new Sunday, September 9, 2018, episode and we have your Big Brother recap below! On tonights Big Brother season 20 episode 33 “Nominations,” as per the CBS synopsis, “The new Head of Households takes power and nominates two Houseguests for eviction. Hosted by Julie Chen.”

Brett came so close to winning HoH, but he knows he is safe this week with Kaycee as HoH. Haleigh needed to win that competition and knows there is no question that she is going to be on the block again.

Sam is surprised that the numbers are going down and she is still there. Kaycee is thinking about putting Haleigh and Sam up on the block.

Kaycee shows her room to everyone and she gets a family letter, it is just the thing she needed to stay focused in the game.

Kaycee has to break it to Sam that she is going to be the pawn. She could use JC as the pawn but he has been working more with Level 6. Brett speaks to Sam and tells her that hands down the house wants Haleigh out and whoever is put up as a pawn, needs to stay calm.

Sam and Kaycee talk, Kaycee tells her that her target has to go, Haleigh, and all Sam has to do is remain calm.

Haleigh goes to see Kaycee next and says she knows she is going to be put up but wants Kaycee to know that she has her.

Nicole, winner of season 18 is in the Big Brother house to host a luxury competition, or so she thought. Victor comes on the screen, he met Nicole on Big Brother. Victor walks in, he got a haircut, he gets down on one knee and asks her to marry him – she says yes.

Someone is at the door, Derrick, Josh, Paul, Britney, and Daniele, former Big Brother houseguests are there to celebrate with them. The current house guests join everyone in the living room. They pop champagne and toast the happy couple.

The party is over, Angela is with Tyler and tells him her life story about how she was in gymnastics and it was very hard on her family.

Haleigh is feeling emotionally drained because she knows she is the target, she goes back into Kaycee and gives it one last try before the nominations.

Time for the nomination ceremony, Haleigh and Sam are nominated, Kaycee says that this was the best move for her and hopes there are no hard feelings.