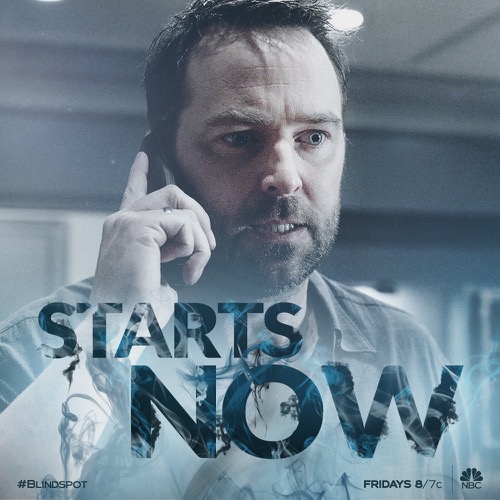 Tonight on NBC Blindspot airs with an all-new Friday, December 07, 2018, episode and we have your Blindspot recap below.  On tonight’s Blindspot season 4 episode 8 Fall Finale called, “Screech, Thwack, Pow,” as per the NBC synopsis, “Remi races against the ever-worsening ZIP poisoning to enact her ultimate plan.”

Patterson helped the renegade team that was going after Zapata on tonight’s all-new episode “Blindspot”.

Reade and Weitz knew had tracked down Zapata. They knew she was in Mexico and they wanted to follow her without it coming up on the CIA’s radar. So they went to Patterson. Patterson supplied them with transport and all the information they could need. She also was surprised to learn that Reade was working with Weitz of all people because the team didn’t really think much of their director, but Weitz had created the rogue unit and he wasn’t going to let Reade leave behind. They were both going to go to Mexico and they told Patterson to hold down the fort in the meantime. She had gone back into the office and she thought she could just focus on the latest data cache they found. And it turns out her day held plenty of surprises.

The first thing that happened was that the Weller asked both Patterson and Rich to come to his apartment. He wanted to tell them in a secure setting that they didn’t need to look for the mysterious sandstormer because he found her. The person that was trying to resurrect Sandstorm was his wife. Jane had lost her memories thanks to the ZIP poisoning and she reverted back to Remi. Remi was the one that was working with Violet Park and Weller wanted to keep that a secret among the core crew until the very last second. He followed Patterson and Rich back to the office where they were hoping no one would ask about where Jane was, however, that’s when the second surprise hit.

The whole FBI building was alerted when a reported nuclear missile was launched at the United States. It was supposed to hit New York City within an hour and there was no way of stopping it. The shields that were put in place to stop the missile only had a twenty percent chance of working and as Rich notes that it was not wasn’t even as the functionality on condoms. It was basically a bullet hitting another bullet. It didn’t mean people weren’t going to get hurt and so Rich began to panic. He called Boston to tell him “I love you” one final time and Weller did the same with Remi. They thought they were about to face the end and so they tried to use their final moments to figure out who had launched the nuke.

Rich tried to trace this nuke that was supposedly on its way and his investigation told him right off that there was no missile. The team was instead dealing with a hack. There was someone out there that faked a nuclear missile and it locked officials out, which ensured that no one could get back in prove that there wasn’t a missile. Rich had traced the hack and it was coming from inside of the FBI. The guys followed the signal back to their own servers and they noticed that someone had planted a foreign device into it yet Rich said that there were only two cables like that because he was the one created it. He said that he had one and that he had given the other one to Boston. The same Boston that broke his house arrest.

Rich also found out that there was a co-conspirator and he traced that back to the same warehouse that Remi’s friends were using. So that told the trio that Remi and Boston were working together! They just didn’t know why. They reasoned why Remi would fake a nuclear missile and as they began to dig it they also noticed that Remi was looking at CIA black site. They eventually came to the conclusion that Remi was trying to get to Shepherd. Shepherd would be moved from her cell in the event of a terrorist attack and so that’s why they needed to fake a nuclear missile. They wanted to fool the CIA into moving Shepherd and they waylay the van while it was in transportation. And so Weller decided to call in a credible a threat to the CIA.

It was the only way to warn them without telling them of Remi’s involvement. Weller called and said that they had evidence that the CIA would be attacked, but because he didn’t mention the particulars he ended up missing the vehicle that was transporting Shepherd. Shepherd’s van was stopped in the middle of the road and Remi fought her way to her mom. Shepherd didn’t want to be rescued at first because she thought Remi was still Jane and so Remi had to force her mother to look into her eyes. Only when she saw that Remi really was Remi, Shepherd decided to go and while she wasn’t quite her old self she could see that something was wrong. It was pretty hard to miss the signs seeing Remi was talking to Roman as if he was there and he wasn’t.

Shepherd it seems had known what the ZIP poison was capable of and she could see that Remi was suffering from its effects, only she didn’t slow down from getting away from the scene and she didn’t care that Remi shot at Weller. Weller was once a part of Shepherd’s grand plan though when he tried to get in the way of her rescue and so Remi sent his car over the side. Remi then left with Shepherd and the two found a place to hide. They were waiting things out while they formulated a plan and Shepherd revealed that maybe they shouldn’t try to build a resistance. She was tired and she wanted to live out of the rest of her life in peace somewhere with Remi. And Remi didn’t want that or at least could never admit she wanted it because she saw it as a sign of weakness.

Remi demanded that they continue their plans for a revolution and she got her mother to agree to the same. They just didn’t know where to start and they had to discuss a few things. Like why didn’t Shepherd tell Remi about the side-effects? Shepherd said she thought they would have found a cure by then. She explained how Roman began his research when he found out his sister could die from the poison and he even found someone named Kalisto. Remi decided to forgive her mother for what happened as long as they were honest from that moment on and were equal partners. Shepherd agreed to that and so they both got to decide what would happen from now on. And that would have worked if Rich hadn’t sent a fake video to Remi.

The team was able to get Boston back and Boston told them how to contact Remi and that Remi was seeing her dead brother.

So they faked a video of Roman telling Remi to meet with them and she showed up to find her husband there waiting.

Weller said he was going to bring her in and so they were about to get into an epic fight.

While down in Mexico, Reade and Weitz got the drop on Zapata!