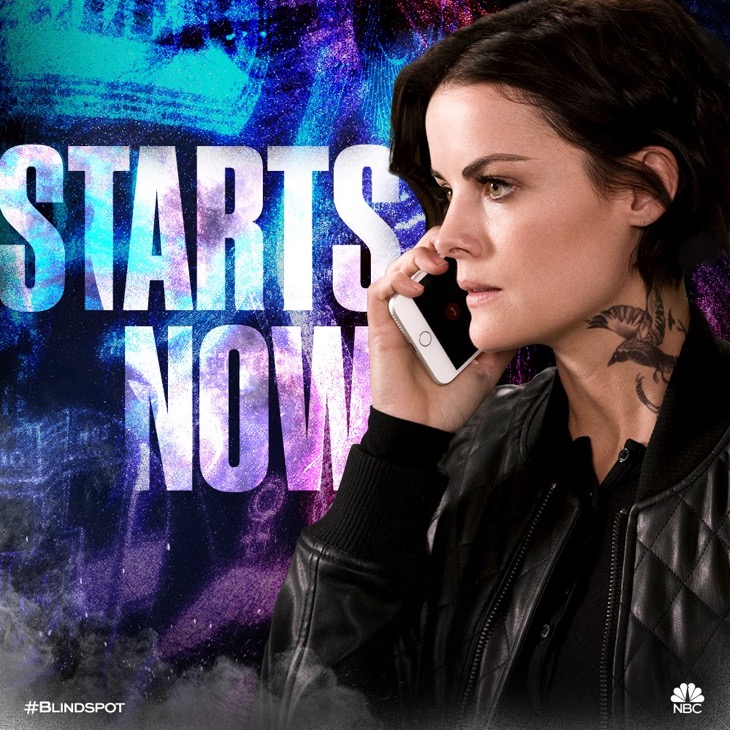 Tonight on NBC Blindspot airs with an all-new Friday, January 26, 2018, episode and we have your Blindspot recap below.  On tonight’s Blindspot season 3 episode 11, “Technology Wizards,” as per the NBC synopsis, “While Jane and Weller partner with a mysterious man from Jane’s past to find a missing person, the team races to stop an arms deal.”

Jane met someone when she was on the run. He had been in the same field as her what with rescuing kidnapped parties in return for large rewards and the two had had one night that Jane regretted the next morning. But Jane had reached out to him when she learned she had a daughter. She thought she could still find Avery at that point and so she turned to a friend she believed could devote his entire time to finding her daughter, but when she found out that Avery was dead and the circumstances of her death, she still went to that friend for comfort. Jane visited him after the last mission and they had a couple of beers that night that didn’t progress any further.

Clem Hawn had still been interested in Jane and he would have happily become more if she hadn’t still been in love with Weller. But Clem had put all that aside when Jane called him for help and he had still tried to be a friend when she thought her daughter had died. So that fact that was no longer true didn’t change their relationship. They were still good friends and Jane wanted his help the moment she found out Avery was alive. Avery it seems had faked her own death with Roman and the man that Weller thought he was hunting, however, something must have changed in the agreement with either one of them or both of them because she was later kidnapped for real.

Dedrik Hoehne who went by several aliases had gone on to kidnap Avery after he allowed Weller to believe he had killed him. But Avery had gotten away for a few hours and had tried to make a call for help. So no matter how this all began, she was in trouble and Jane wanted to rescue her before her daughter died a second time. She told her entire team at the FBI that she wanted to go after her daughter and that they couldn’t use too big of a team. It would spook Roman if everyone left and so Reade thought maybe it should just be Weller and Jane that went yet Jane hadn’t wanted Weller to come with her and she told the team she was taking Clem. Clem, she explained, was highly-skilled and he trusted him a lot more than Weller.

But Weller wasn’t going to let Jane side-lined and so he went her and Clem anyways. He had suspected that there was something more about Clem that Jane wasn’t telling him and so he eventually asked the question. He asked Jane if there was anything between her and Clem and said “yes”. She told him that it had been a brief relationship when they split up and that she hadn’t told Weller because she had wanted to protect him. So Jane said that more often than not that they seem to hurt each other whenever they tried to protect the other and so she demanded that they stop doing that because it wasn’t doing anyone good.

Jane felt and stated that what she did wasn’t any worse than what Weller did. But he was still upset when he met Clem and he went out of his way to be difficult even though Clem was just there to help and had a lot to offer by the way. He helped them get into Dedrik’s building and afterward, he helped them use one of Dedrik’s men’s phones to contact Dedrik. The baddie had unfortunately figured out that the feds were onto him and so he was willing to negotiate. He said he hand Avery over if he got money and a plane from her loved ones. So the guys had said that they would try to get him those things when really they were tracing the call.

The managed to pinpoint Avery’s location to a certain area and funnily enough, she helped them with the rest. The video that Derik had sent Jane as proof of life had shown her flashing the numbers two then three and there was a place in the region they cordoned off called tunnel 23. It was an old tunnel that the refugees from East Berlin used to escape from beyond the wall. But they didn’t know how many men that Dedrik would have and so they had to split up once they got inside. Jane went to her daughter and freed Avery while the others tried to find Dedrik. And, well, everything got little crazy once they found Avery.

Avery had been freed by her mother and in return, she pulled a gun on her. But Weller was down in tunnel when he came across Roman. Roman had been the one to kidnap Avery and he had also filled up the young girl’s head with lies. She thought her mother had thrown her away and that Jane would throw her into prison like she did to Roman. So Avery no longer trusted Roman, but she didn’t trust Jane either and so that’s why pulled the gun out. She thought she needed to protect herself from both siblings and like a child, she didn’t plan ahead or even thought about what would happen once she got out of the tunnel. And so Jane told her the truth.

Jane said that Roman would remain a threat and that she didn’t have to want Jane in her life though she would need the FBI’s protection to get away from Roman and so Avery decided to trust her mother. She agreed to put down the gun and left the tunnel with Jane. But Roman got away again. He just hadn’t escaped before talking to Weller and hearing what Weller had to say. Weller told Roman that Jane was never going to trust him after he used her daughter to manipulate her because that’s exactly what Shepherd did to them. So Roman had liked what Weller said and he had later called Jane to threaten her.

Roman told her happiness wasn’t going to last and he was more than capable of sabotaging her as well as her team. But Roman hadn’t been responsible for someone hacking “Wizardville”. That had been Boston because he was the one that created the backdoor when he helped create the code for Patterson and so she learned not trust him when someone hacked the game to manipulate users into doing what they wanted. So Patterson told Zapata and Reade about the game and them along with Rich had tried to help her close the back door, yet by then, it had already been too late because Boston locked her out and he had done so on the orders from his latest boyfriend.

Boston would later come in and apologize to her for what he did. But he hadn’t meant any harm. It had created the backdoor to act as a voyeur and his boyfriend had used it to blackmail a defense contractor for a special type of bomb. So Boston helped the team stop his boyfriend and so the FBI agreed not to arrest, but they were going to put him back on house arrest and he did sort of lose his boyfriend. His ex, Rich, had suggested that they could maybe get back together and not that surprisingly Boston turned him down. He said that he would have loved to have heard the words two years ago.

But Zapata, seeing that Rich had waited too long, had gotten close to telling Reade her feelings for him and had instead backed off when she saw that Reade had bought a ring for his girlfriend.