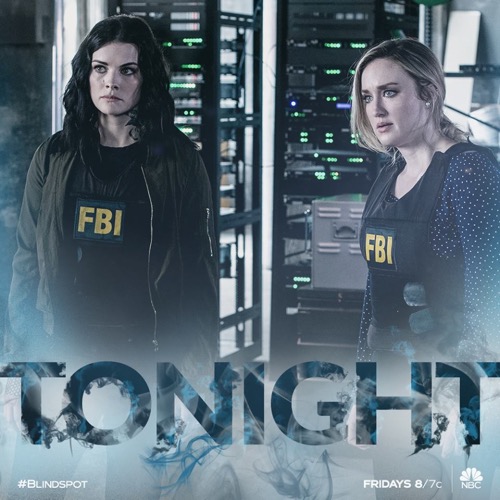 Tonight on NBC Blindspot airs with an all-new Friday, October 19, 2018, episode and we have your Blindspot recap below.  On tonight’s Blindspot season 4 episode 2, “My Art Project,” as per the NBC synopsis, “The entire intelligence community is put in jeopardy when Remi co-opts an FBI case.”

Remi was still hallucinating on tonight’s all-new episode of “Blindspot”. She was still talking to Roman in her mind, but she was at least aware that he was dead. Remi knew that she was hallucinating when she talked to her brother and she didn’t care because she missed him. Roman had died without the real her by his side and part of the reason she wants revenge against the FBI is because she blames them for killing Roman. Hence the hallucination was the one that was pushing Remi to act. She had lost her last ally with Dolan’s death and so she was getting desperate. She knew that the team was investigating whoever they believed was trying to rebuild Sandstorm and she didn’t know how to get them to off her trail.

Until she could figure out what to do, Remi played her part. She was the worried wife when Weller went back in and she had smiled for everyone when they said they were happy to see Weller back on her feet however Weller was asked for his input in regards to this Sandstorm situation. The man himself had had no clue who was behind he attempted revival and he wanted to put all of their resources into investigating the matter. The others agreed and they would have followed through on it if they hadn’t heard about HCI. HCI was Crawford’s old company and it turns out it switched hands. It was inherited by Blake Crawford and then her plane went down with most of the board on it. The only survivor was Madeline Burke and she was the one that was now running things.

The team knew that they needed to investigate Burke further though secretly both Reade and Rich were worried about Zapata. Zapata was last seen with Blake Crawford and so they knew there was a chance she was on that plane. That’s why they were searching for a manifest behind everyone’s back and the only one they had brought in from the cold was their CIA friend. The CIA had also grown concerned when they couldn’t get any informed on Zapata and so everyone needs answer only no one suspected the truth. The truth was Zapata had staged the airplane crash and she was with Madeline Burke. Buke had killed everyone else on the board to assume power and she had used the same drug on them as she did her husband.

Burke was the widow of Silas Burke. He was a billionaire that inherited his wealth and he married his wife when she right out of medical school. Burke it seems was always ambitious and only the men hadn’t seen that. She made her move after she knew Hank Crawford was dead and Crawford’s former lieutenant was also killed because Burke wanted no one from that old life to know about her movements. She got everything that Crawford owned and she even made sure to grab a hold of his personal files. So why would someone like her want Zapata? Zapata was proving too good at cleaning up after herself and so Burke had Zapata cleaning up after her. And in return, no one knows that Zapata is still alive.

Her former team had come across something connected to the tattoos and so they ended up dismissing Burke. She didn’t seem like a threat to them while a tattoo could lead them somewhere. This latest tattoo was connected to a sculpture they pass every day at the FBI headquarters and so the team followed the clues until they were led to a location. There Patterson and Remi were drugged, but they found out who was behind it and had even learned something. The man they met said his name was Jason Stack. He claimed to be part of an off the books team within the NSA and he said he needed the FBI agents to get him a file. It was supposedly connected to an imminent threat and so the ladies went back to their team to tell them what they found.

They thought this Jason was someone that worked with Nas and Nas denied ever knowing a Jason Stack, so with that out of the way, the team tried to figure out who they were dealing with. They spoke to CIA Special Agent Jake Keaton and he had information on their mystery man. He said this Jason Stack was really Boris Solokov. He was an FSB spy and he believes that his wife, as well as his daughter, had died eighteen years ago. The truth was the wife defected to the other side and the CIA faked her and her daughter’s deaths. The pair were now in witness protection and so that piece of information meant the world to Remi. She told the others that they play along with Boris’s plan to get more information out of him and so she and Patterson went back to the secret location. They did everything the were told and the only difference this time was that Patterson thought Boris had drugged them again

He didn’t. It was Remi that drugged Patterson and she did that so she could talk to Boris alone. She told him that his family was still alive and that she would give them his location if he handed over everything he had on CIA black sites. It turns out Boris had been fully plenty of agents over the years and tricking them into working for the FSB. So once Boris knew his game was over, he was willing to work with Remi and he had her believing he wasn’t going to kill her when again the truth was something different. He called an FSB hit squad to come and it was them getting into gear that forced the team’s hand. They figured their agents were at risk and decided to go look for them. And they used the FSB agents to track them. They pinged the other team’s phone and it led them to right to Remi.

Remi convinced Boris to take her hostage as a way to buy time and instead, she handed him over to be killed. He was dead the moment Remi gave the signal to Weller to take that shot and so only she actually walked out of their deal. She got information on where Shepherd was and she wanted to look for her mother, but first she knew she needed to kill her husband. And so she was last seen building her resolve.