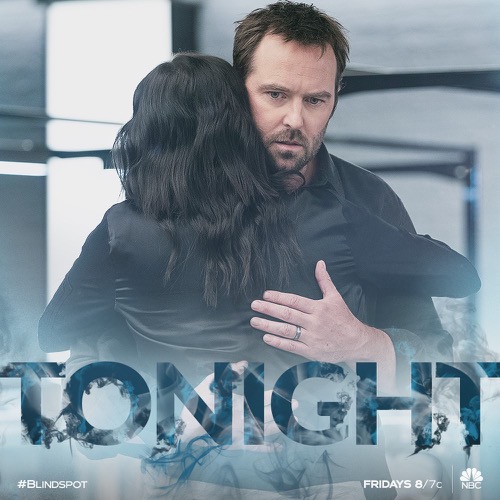 Tonight on NBC Blindspot airs with an all-new Friday, November 02, 2018, episode and we have your Blindspot recap below.  On tonight’s Blindspot season 4 episode 4, “Sous-vide,” as per the NBC synopsis, “A tattoo puts the team in danger when a deadly disease is released inside the FBI.”

Rich found something in Roman’s Tokyo cache on tonight’s all new episode of “Blindspot”. He found what he thought was a recipe and he even went over to Weller’s apartment to cook for his favorite couple. He was preparing it when Weller came home and the FBI agent was concerned. He didn’t like it that Rich let himself in or that Rich was wasting his team over a recipe that didn’t work. Weller pointed out to Rich that there was a line in the recipe that would have ruined the entire dessert and, well, Rich hadn’t believed him. Rich tasted the creamy mess he made and he knew it was too horrible to be an actual recipe. He realized that the word “cream” was a password and so he entered it into the recipe where he learned about their latest tattoo.

The tattoo was directing the team to go an abandoned psychiatric hospital. The hospital was shut down decades ago for malpractice and no one knew why it was important or if it was even still relevant. They decided to check it out anyways and walked right into an ambush. They got to the building and someone started shooting at them just as they entered. The field agents were able to return fire and they killed their would-be killer, but they didn’t know why he opened fire on them when he must have known there was no way out of it and so they questioned what he was hiding before he died. They looked around and they found a bunch of dolls. The dolls didn’t seem like something worth dying for and so the guys brought it back to Patterson.

Patterson had learned that the man they killed was a smuggler. He was known for smuggling weapons and drugs, so everyone thought the dolls hid the drugs. Except they ran on a scan on the dolls and there was nothing inside. Patterson and Rich suspected that the doll itself might be a form of heroin starching and so they reached out an expert in that field. There was a woman named Laurel Chadwick that worked in the building and was familiar with the starching process. She was asked to test the doll and so she began cutting into it. Again, everyone thought drugs and weren’t aware of anything else until Patterson’s computer registered something about the dolls. The dolls were pictured right inside of areas affected by ta hemorrhagic fever of some sorts and so Patterson believed the dolls were poisonous.

Unfortunately, Patterson came to this a conclusion a little too late. She just figured out that they shouldn’t be releasing whatever it was inside of the doll when Laurel cracked it. When she did that, a yellow powder came out of it and it got all over her hands. Patterson reacted quite fast despite the situation and he locked down the building. She had still been in the lab with Rich, Reade, and Laurel while Weller had been outside when the building was put on lockdown. He had been meeting with his ex Allie because he wanted her help at guessing what Jane was up and so she was busy telling him to let his wife deal with her impending death however she saw fit when they heard the alarm. The two quickly realized that the building had been targeted and they wanted to know by what?

Weller called Patterson. The two talked about the bioweapon and Patterson even explained how she thought it was man-made and that the biohazard team weren’t listening to them. Patterson and the others were constantly being told that they shouldn’t worry and let the professionals handled things. Patterson thought that was stupid. She knew that herself and her lab could both be utilize in finding a cure and so she came to question why she was being side-lined. Patterson shared her doubts with Weller and he apparently felt the same about BCRU Officer Beck. Beck was leading the team that was treating the infected and he was carrying around guns. Weller didn’t think those were needed for such a situation and he thought Beck’s excuse was weak.

Weller told Patterson everything about it and he told her they needed to solve the tattoo. Everything began with the tattoo and so that where they should be looking for answers. They used the same recipe as before and they typed in something else this time. They used the word “rosemary” because that had been the only other thing out of place in the ingredients and it turns out the recipe spelled out “BeckBCRU”. It was trying to tell the team about this bioweapon and it had even told them who created it. Finding out that Beck had been part of the problem, the team took a second look at Laurel’s blood. She had died at the lab and Patterson had wanted to check her blood herself because she thought that would give them a clue. And the blood showed that whatever killed Laurel had been introduced into her system after she was infected.

It turns out that Beck was experimenting on his trapped FBI agents. He created the pathogen and he wanted to see how affective it was. Weller eventually broke into the building to get to his wife and he found her being tested on. He and Jane/Remy worked together to take down Beck and they found out where he kept the cure. After they took down Beck, the team was released from quarantine and they thought everything was ok. The only one that had doubts was Allie because she noticed that something was off with Jane. The Jane she knew would have stopped Weller from going into an infected building and the fact Jane hadn’t said anything had made her believe that maybe Weller was right. Maybe there was something wrong with Jane.

Meanwhile Remi who still thought she had everyone fooled had used the quarantine to plant a device on the FBI server and she was going to use that device to find out where Shepherd was being held.

Reade on the other hand had returned home where he thought he could put the day behind him and instead he finds Zapata there with a gun with in her hand.