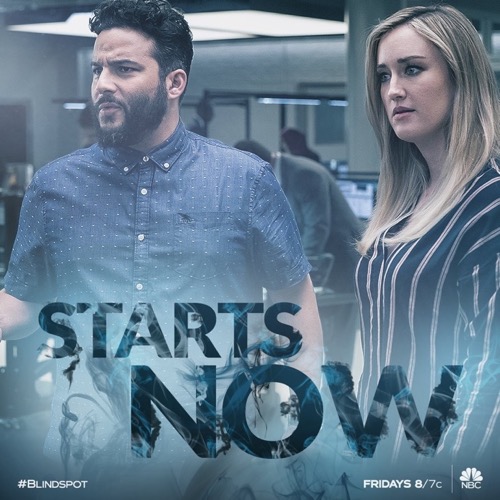 Tonight on NBC Blindspot airs with an all-new Friday, November 09, 2018, episode and we have your Blindspot recap below.  On tonight’s Blindspot season 4 episode 5, “Naughty Monkey Kicks at Tree,” as per the NBC synopsis, “A blast from Rich DotCom’s past sends the FBI team after a deadly terrorist plot.”

Zapata took Reade hostage because she needed his access to the FBI servers on tonight’s all new episode of “Blindspot”.

Only Zapata didn’t go to Reade’s apartment alone. She went with Claudia and Claudia unfortunately liked to torture people. She even wanted to torture Reade and Zapata hadn’t been allowed to oppose her. Not unless she wanted to get on Madeline Burke’s bad side. Burke was the one that had become disappointed with Zapata’s work for her and so she sent Zapata a challenge. She told Zapata to get the information she wanted from the server and that if she couldn’t do it then she had to let Claudia take over. Claudia was more violent and once bought she stays bought. She seemed like the person that would follow Burke’s order no matter what they were and that’s exactly what Burke wanted.

Burke once ordered Zapata to kill a child and the woman had only pretended to she followed through with the command. She instead allowed the little girl to live and so there was a witness that could testify that Zapata was still alive despite all the efforts it took to stage Zapata’s death. Zapata needed to earn her way back into Burke’s circle of trust and to get there she agreed to go on this latest assignment with Claudia. They were supposed to gain access without anyone and leave town without anyone knowing what happened. It was the perfect plan until the FBI building went on lockdown and Zapata couldn’t get onto the servers with anyone getting hurt. And so with her plan failing, Claudia took over.

Claudia broke into Reade’s home and tried to overpower him when he came in, but the plan didn’t work because Reade was a seasoned agent and he quickly overcame her. Claudia was pinned to the ground with Reade’s gun pointed at her when Zapata appeared to save their agenda. She turned her gun on Reade and wanted to torture him with a hot poker, except Zapata hit Reade so hard that it knocked him out and she used that to her advantage. She said that they could question him when he came to again and so they were forced to play the waiting game. It was hours before he regained consciousness and by then Zapata had gone back to playing bad cop. She demanded his password or she said she was going to unleash Claudia on him.

Reade was with the two women for hours and none of his team suspected a thing. They had worried about the latest tattoo that they unraveled. The tattoo was revealed that one of the most notorious assassins in the world was back in NYC and that he was planning something. His name was Luthor VanLax and the feds picked him up just after he killed Dr. Miller. They arrested Luthor and something strange happened as he was being marched through the FBI building. Luthor took one look at Rich and recognized him. He said that Rich was the reason he found his purpose and then questioned why someone like Rich would be working with the feds. It didn’t make sense because Rich never recognized Luthor and so the feds wanted to know what Luthor was talking about.

They put him in an interrogation room and grilled him over his latest kill. They wanted to know why he killed a doctor and he claimed that he was doing it because the environment needed saving. He also sprouted a bunch of mumbo jumbo before saying the man he knew was a visionary that would never work with the feds. Some of what he said had reminded Rich of something and so that’s when made the connection. Rich later informed the team that he once owned an eco-friendly website. It was supposed to be a way for people to donate old tech they didn’t need and the money that was supposed to be raised from the sale would have gone back into saving the environment. There was just one problem with the charitable endeavor – it was all a scam.

Rich found it funny because he never cared about saving the environment. He didn’t even care about the website and that’s why he created an AI to deal with it. Rich created a program that would released plagiarized messages about the environment every few weeks and he took the credit for it. He went by Jackson Fernwood at the time and it mostly came up with the website as well as the AI because he had been drunk at the time. He never knew that he created a following or that terrorist were actually quoting him. The assassin they arrested revealed that thousands were going to die and it turns out he was part of a eco-terrorist group called ELM. ELM was being led by Daniel Katzovich who’s been responsible for a lot of bombings in the past and he was never arrested because the feds hadn’t been able to prove what he did.

Again, Rich found the whole thing funny because he met Daniel. They met years ago when he decided to pretend to be Jackson in real life and the two had had a nice conversation at a vegan restaurant. He was actually laughing right up until his friends came up with a plan and it involved putting him in harm’s way. The team needed Rich to pretend to be Jackson again in order to get a meeting with Daniel. Daniel revered him and used the gibberish he printed online as a manifesto. Rich was probably the only one that Daniel would allow onto his compound and so they sent Rich in with Weller acting as his servant. The two were welcomed with open arms and they used that opportunity to sneak around searching for clues to the upcoming attack.

They found trace evidence that the doctor that was killed was also part of ELM and that she recently bought up white phosphorous. She was probably killed to stop anyone from questioning her when the attack happened and so all Weller had to do was find out what the chemical would be used in. He searched the building and he found a bunch of drones that had capsules on them. It turns out the plan was an airstrike. The CIA was helping out with this investigation and that meant Keaton had heard what was going to happen to the city and that they might not save everyone. Only Keaton also had the opportunity to talk to “Jane” and she asked him to take her to Shepherd because she supposedly wanted one last chat with her mother before she died.

The two weren’t able to finish their conversation because of imminent attack, but Keaton remembered what she said and Remi thought he would eventually answer her. Until then they had to find Rich because somehow both Daniel and Rich went missing without anyone noticing. It turns out Rich had followed Daniel when he saw he was about to his plan into action and so Rich bought his team some time. He did his best to talk to try and talk Daniel out his plan. And it wasn’t working because he couldn’t reason with terrorist however the team arrived and they took down Daniel team as well as stopped the drones from crossing the water over into the city. Rich had even made his first arrest when he read Daniel his rights and so it had been a good day with one exception.

Keaton had been injured in the field and he was put in a medically induced coma. Therefore, when Reade was finally away from his captors and, wanted answers from the CIA, there weren’t any to be found. Reade could only rely on his team and his team weren’t up to their usual standards. Their friend “Jane” was keeping secrets and Weller recently learned his wife was meeting up with contacts on the black market. So now he knows there’s something wrong and he’s alerted Patterson’s suspicious nature. And so there really wasn’t anyone around to tell Reade if his thoughts about Zapata’s loyalties were delusional.

Zapata seemed to be loyal to Burke and she later killed Claudia because she allegedly found evidence proving that Claudia was a mole from MI6.