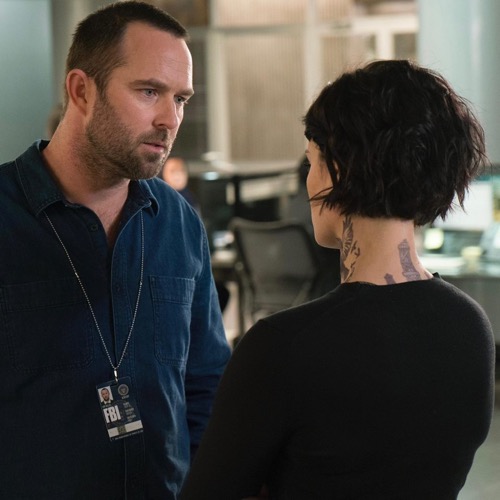 Tonight on NBC Blindspot airs with an all-new Friday, March 9, 2018, episode and we have your Blindspot recap below.  On tonight’s Blindspot season 3 episode 14, “Everlasting,” as per the NBC synopsis, “When Patterson’s (Ashley Johnson) investigation into a tattoo result in a horrible incident, she tries to figure out what went wrong– but quickly realizes all is not as it seems.”

Patterson wasn’t ready to get back on certain horse. She had a sketchy dating past and her most recent ex had tried to kill her, but there was this guy in the FBI building named Jack and he was interested in Patterson. He had even tried to tell her so by asking her to come to his lecture and if not that then a cup of coffee one afterwards. And she had fobbed him off. Patterson had told him that she was busy and so later Zapata had a heard with her because she couldn’t understand why Patterson said “no”. This Jack was handsome and was clearly trying to win her over if she just let him!

Patterson however was adamant. She said she wasn’t ready for that sort of relationship and had gotten the chance to throw Zapata dating advice back at her friend. The two had gotten invited into Reade’s office and he told them that he had proposed to his girlfriend except that had blindsided Zapata. She remembered Reade saying that he would wait for his anniversary and so she hadn’t been prepared for Reade getting engaged so soon or that he would ask her to be his best man. He said that he couldn’t have Weller up there because he wanted Zapata to be by his side. So she congratulated him and had to face Patterson who knew Zapata’s true feelings.

Zapata was interested/ possibly in love with Reade and it had hurt to find out he had moved on though she had no one to blame for her mistake. She later admitted to Patterson that Reade had kissed her a couple of years ago and that she had pushed him away because she hadn’t been interested. At least, not at that time. It was just unfortunate that things changed for Zapata as time passed and that she now had feelings for a man that had firmly closed the window on any possible relationship between the two. That had left Zapata adrift and so Patterson gave Zapata’s advice right back to her.

Patterson told Zapata it was time she got up back on that horse and the two had been talking about it on tonight’s episode all new “Blindspot” when one of Patterson’s techies approached her. Afreen had been so excited that she couldn’t wait to tell her boss that she had cracked one of Jane’s tattoos. She had apparently recognized a sequence code in the tattoos and had traced back to a dead U.S. Marine. This Marine had died the same time as two other U.S. Marines had also overdosed and none of them had been in the same state or knew each other. They were merely strangers that all died on the same day in the same way and all of their cases had been dismissed as accidentally deaths.

The death of the three Marines hadn’t been investigated and afterwards all three had been cremated. Meaning if there was a possible connection between the three, no one bothered to look at it and any evidence of it was destroyed in the cremation. But Patterson was sure that she could find a connection with this new machine she had been working on and she had also gotten Jack to help her with it. They were going to test the cremated ashes when Patterson noticed that something was wrong with the mission and it had exploded before she could find out what the problem was, therefore Patterson should have woken up in a hospital. And for some reason, she didn’t. She woke up and had seemingly started the day over.

Patterson woke up back at her apartment and she went to work when everything she had lived before had happened again. She had gotten hit on again and she had heard Reade’s announcement again yet everything happened like before right up to the explosion. It was after the explosion that she woke up back at the apartment and so that’s when the truth was revealed. Patterson wasn’t actually stuck in a time loop – the real Patterson was gravely injured and was being taken to surgery. And so the time loop was all in Patterson’s head. She was reliving the day over and over again because she was trying to figure out what went wrong.

Patterson eventually realized that her time loop wasn’t real when she saw David again and had even run into Stuart. She had gotten the chance to tell them everything she had wanted to say back when they were alive and this time she listened to them. They each tried to tell her that she could break the time loop whenever she was ready and so that’s when she realized she wasn’t going to get out of it until she found out what went wrong with her experiment. She had suspected something was off when it blew up on her and the coma had allowed her to investigate the matter. In the time loop, Patterson had gotten the chance to talk to the military personnel herself.

Those guys hadn’t wanted her to reopen the investigation into the Marines because they said that called into question their own investigations on that matter and so Patterson tried to figure out why they had been so touchy about the subject. Then, when she couldn’t get answers from them, she questioned everyone that had worked with her on the project. She questioned Afreen who hadn’t been in the room when the machine exploded and she had also talked to Jack because she questioned his motives with her. Patterson had wanted to know why Jack had flirted with her and if he had done so because he had hoped to tamper with her machine as well as her investigation. And as she was trying to put the pieces together, she had overheard her friends.

Her friends had been at her bedside and they had started to talk about the case. They found out their Marines’ remains had showed several chemicals in the body that hadn’t been drugs and so Patterson put it all together in her coma. She realized the Marines had been poisoned and what she hadn’t gotten the chance to overhear was that the Medical Examiners on each case had died within months over signing off on the Marines’ deaths. So, Patterson’s team was putting everything together the same time she did, just she was faster. She had cracked Roman’s code as in the full code he had put into the tattoo and so she found out that the three Marines hadn’t been in separate locations. They had been together when they died.

It was the photos of them that were in the evidence pile. Their eyes had all showed the same level of infection and so they were together, but no one had wanted to say they were together because they had been on a Top Secret mission. The mission was also part of the tattoo and so Patterson realized the Marines had gone into China which was technically was illegal. They shouldn’t have gone there whether it was a black ops mission or not and so she tried to figure out what else the tattoo could tell her. Patterson ran through the sequence with David’s help and she found out it had been General Peter Mahoney that had given the Marines their orders and that he had been the one to cover up the fact they had been killed in a gas attack.

The General had also been responsible for what happened to Patterson because he had wanted to stop her as well as the investigation into what happened else it would reveal the part he played, so Patterson did her best to fight going into the light because she knew she still had a job to do. She fought to stay alive and get justice for those marines. And by fighting, she really did fight the General in her coma. He had tried to get her on the elevator going up and she knew she wasn’t ready to die. Therefore, she fought him until she woke up in her hospital room and had wrote down his initials for her friends. And her friends then took it from there. They brought in the General and they told him of all the charges that he was going to be facing.

The General had never gotten the clearance that he needed to send in that team and so he had gone behind his superiors’ back to authorize an illegal mission. Then he had killed, manipulated, and tampered with evidence to cover up what a failure that mission turned out to be. And so Patterson ended up taking him down. She had also been given clarity and that made her tell Jane to be honest with Avery about Avery’s adopted father. The man hadn’t been a good man. He had moved money and had even taken part in murders, so Patterson told Jane not to lie about it to Avery because half-truths nearly ripped her into two with Weller.

Patterson had come out of her coma with a new view on life and she told Zapata that in her coma she ran into someone that she firmly believes might still be alive.