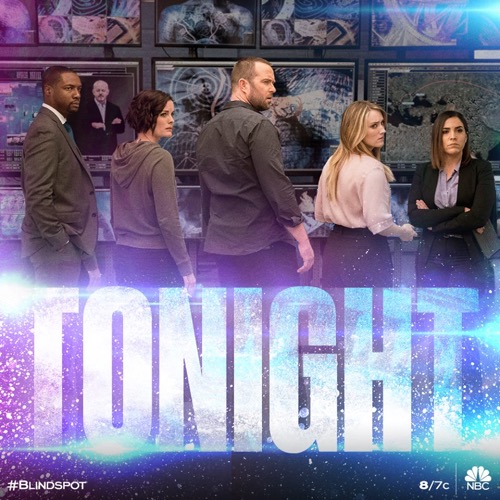 Tonight on NBC Blindspot airs with an all-new Friday, April 20, 2018, episode and we have your Blindspot recap below.  On tonight’s Blindspot season 3 episode 18, “Clamorous Night,” as per the NBC synopsis, “The team faces a deadly threat on all of their lives. Roman’s allegiances are tested.”

Roman had changed allegiances on tonight’s all-new episode of “Blindspot” because he fell in love with Blake Crawford.

Blake had been part of the plan. Roman was supposed to gain her trust and then he was supposed to her. Blake was never anything more than a mark until Roman suddenly realized he fell in love with her and was willing to do kill for her. Blake wasn’t aware her father was a criminal, but Hank Crawford was probably responsible for more terrorist acts than anyone else alive and so Roman had wanted to take him down and he had even gotten Jane involved. She was drugged and given new tattoos all without her consent because Roman had wanted to use Jane as well as the FBI to take down Crawford. And the team had played along.

The FBI had investigated each new case that was linked to Jane’s tattoos and they realized Crawford posed a danger. He had managed to get an inside woman into the FBI and had used her position as the Director to control what people saw as well as when they realized the danger. Crawford would have continued to play everyone if Roman hadn’t figured him out and so the team did as Roman directed because it had seemed like Roman was finally on their side however they spoke a little too soon. The team had been moments away from arresting Crawford when Roman changed his mind about the plan and whisked Crawford away.

Roman had fallen in love with Crawford’s daughter and he also started to respect Crawford. Crawford had acted like a surrogate father and Roman didn’t have any family. He had grown up with Shepherd who called herself his mother and then twisted him up until he was the perfect soldier she wanted. The only bright side to growing up with Shepherd had been Roman’s relationship with Jane. Jane was sister and he loved her so much that he went against Shepherd for her. Only Jane rewarded such behavior by erasing her brother’s memory and forcing him into becoming someone she could mold in her own making.

Jane betrayed him, Shepherd abused him, and there was Crawford who treated Roman with kindness. Roman couldn’t help but react to that and so he ultimately chose Crawford. Crawford was whisked to a safe location and Roman had promised him that he would handle the FBI. The FBI, in this case, being Jane and her team, so Roman knew he had to get Jane first. She had gone out to dinner with her husband because they hadn’t had time for just themselves and so they had taken Richie suggestion to go out. They went to a romantic restaurant and they were talking until Jane noticed that there was a woman watching them.

This woman had ordered a drink and sat on it for an hour while she watched Jane. Jane immediately realized that this woman had agenda and together with Weller she was going to question this woman though following a stranger turned out to be part of the trap. Roman knew that Jane’s curiosity would force her to follow someone with a clear agenda and when she did she ran into right into a group that got a drop on her as well as Weller. The two had gotten split up and the next thing Jane knew she was waking up in a small enclosure that had a tv. It wasn’t surprising that Roman would kidnap her or that he would leave her message and so the message had been what hurt the most.

Roman had left a message for Jane telling her that he was going to kill everyone she cared about because he wanted her to live with that. Jane was being punished for being the sister that let him down and Roman went after everyone. He targeted Zapata when Zapata went to a funeral. The funeral had been for her old boyfriend and Zapata had regretted giving up on him. He had grown up in the same neighborhood as her and had gone the other way. Ricky joined a gang and Zapata joined the NYPD yet she had tried to talk him around and had eventually given up when that hadn’t worked.

Zapata had given up on him because she thought he couldn’t be saved and she didn’t realize what that must have felt like until her own team gave up on her. They weren’t really talking to her when they didn’t have to and so Zapata had gone to Ricky’s funeral on her own. She had run into his sister who had joined the police force and the two took time to talk after the funeral. They were going over what it must have been like to come from their neighborhood and become a cop when Zapata noticed a shooter. She protected her friend and had hidden themselves up they came up with a plan of action.

Zapata had drawn out the fire while the other woman had taken out their shooter by shooting from right below him. So they had gotten out of their situation safely however she later learned that Reade had gotten attacked in his apartment while someone was shooting her. She had called Reade to tell what was happening and he informed her that he dealt with the same thing. He had someone hiding in the bathroom. The guy had apparently been there when Reade had a visitor over and the visitor had unfortunately died all because she had wanted to use the bathroom. That’s when Reade had been alerted to the assassin and had dealt with him as fast as he could.

It wasn’t until Zapata and Reade started talking that they realized someone was after the whole team. They later found out that Weller had escaped from his guy who had tried to take him out the restaurant and so they then were concerned about Patterson. Patterson had gone on the first date from hell with a guy she tried to be interested in and had actually been arguing with her date when someone started shooting at them, so she blew something up and Zapata moved in at just the right time. The team knew they were in danger and came together to work on finding Jane. Jane had been in the back of a van and she had gotten an advantage.

Jane saw that the people that kidnapped her weren’t as smart as her brother and so she used that advantage. She forced them to stop the truck and was working on taking them out when her team did arrive. They shot the last person was a threat and they all made it through. The team had survived despite Roman and, once Roman had found that out, he moved to cut out the middleman. He was going to kill the team himself until he was informed he couldn’t because he was too close to Crawford. Crawford it seems was planning on something like the “shot around the world” only bigger!

Crawford was about to pull something off and he needed Roman there to oversee the plan, so the FBI was left alone for now.

They didn’t even have to worry about splitting up because a letter recommending Reade for the suspension was mysteriously lost after the woman that wrote it died.