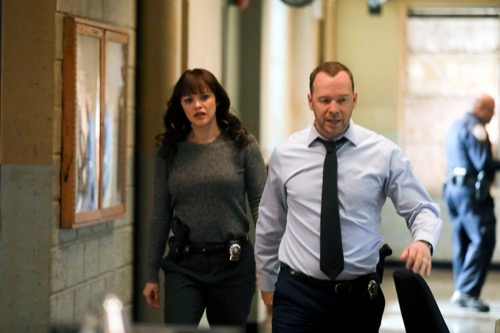 Tonight on CBS their hit drama starring Tom Selleck Blue Bloods airs an all-new Friday, May 11, 2018, episode and we have your Blue Bloods recap below. On tonight’s Blue Blood Season 8 episode 22, as per the CBS synopsis, “The Season 8 finale: When a series of drive-by murders occur after six wrongly convicted men are released from prison, Danny and Baez wonder if they were orchestrated by the men as an act of revenge. Also, Frank combats the guilt he feels about these innocent men unfairly serving nine years in prison, and Jamie and Eddie find themselves in a life-threatening situation.”

Danny is at Linda’s grave telling her she was the only one that mattered and he is having a hard time.

Frank is giving a question answer with the press and one woman asks if he can comment on the 5 million dollars settlement awarded to the so-called prospect park six. Frank says that the young men spent 9 years in prison for a crime they didn’t commit and he doesn’t know how you put a price on 9 years of a life. Garret jumps in and says for those of them who were not covering this office when this crime was committed, a gang rape took place the night after Frank was sworn in. The reporter asks if Frank reached out personally to the six men and he says no because he doesn’t know what he could say that would mean anything at this point.

Danny and Maria are on the scene of a shooting, a man drove up and shot a woman named Ida in the head in front of witnesses.

Jamie is on the scene of an accident, he helps a 15-year old named Lewis Escobar, he doesn’t have a license and he was driving his brother’s car.

Erin is walking with Monica when someone shoots her.

At the station, Lewis’ mother is there and it turns out that his brother is one of the prospect park six.

Jamie speaks to Anthony and asks him if he could speak to the city law department and give Lewis a break since his brother Manuel was one of the prospect park six.

Danny asks Erin if she noticed anything when Monica was shot and Erin says no, she didn’t see anything because she was shocked.

There is another victim, a 16-year-old girl and Frank thinks these assassinations are tied to the prospect park six, their release, their reward.

Danny and Maria go see Ida’s son wants to know if he or his mom had an enemy; he says there was one guy named Randall, he said he owed him big time, not in a good way. The next stop for Danny and Marie interrogate a woman named Brandy who knows Randall, she won’t tell them where he is. Danny continues with Brandy and Maria leaves the room when she returns she announces that Randall died nine days ago, he is not the guy they are looking for.

Jamie and Eddie go to Mrs. Escobar’s home to see if Lewis is ready for his family court appointment.

Frank gets home and Henry, Erin, Jamie, and Danny are there – they discuss the case. Frank says there is one of the six, his mother died of cancer and he says she died of a broken heart – they wouldn’t let him out of jail to go to her funeral. Danny gets a message, an off-duty officer was just shot while walking her dog.

The next day, Danny and Maria go back to see Ida’s son. He says there was a guy, one of the six, called Dewan Wilson who he treated badly in a cell.

Monica’s ex-husband visits Erin and Anthony and asks if he had any involvement in the prospect park six case; he was replaced because he had surgery. He said that he thought the five would flip on Dewan Wilson, but it didn’t happen because they were all innocent.

Jamie and Eddie go back to the Escobar apartment and see them moving out, Manuel is there and Jamie says to say hi to Dewan when he sees him, he leaves a card for him.

Manuel visits Jamie, says he is in touch with Dewan and thinks there is something going on with him because his texts are weird; Manuel agrees to give Jamie the phone number. At the station, they trace it and find that Dewan has been in Miami. Danny doesn’t think Dewan is doing the killings himself, he thinks he hired a hitman to do them.

Danny calls Dewan, he freaks out that he has his number – then Danny walks in while Dewan is having a message. Danny handcuffs him and tells him he is taking him back to New York. Eddie and Jamie are driving in a squad car when they stop to get a coffee, Eddie goes in a cafe to get coffee and tea when she sees a guy in black car driving up to Jamie and the guy shoots him, but thankfully Eddie runs out of the cafe and alerts Jamie just in time, he ducks and is ok – Eddie shoots the other guy and he is DOA.

At dinner, everyone is waiting again for Jamie to arrive, he is a bit late but he is there. Jamie brings Eddie to dinner and tells everyone that she is the future Jamie Reagan. Henry says they can’t be partners any longer but Jamie tells him that there is nothing in the rule book that says they can’t. Frank welcomes Eddie to the family, she calls him dad and everyone laughs.