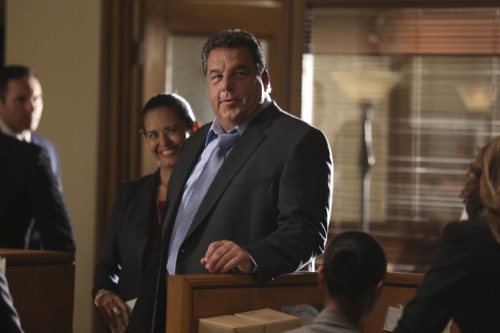 Tonight on CBS their hit drama starring Tom Selleck Blue Bloods airs an all-new Friday, October 12, 2018, episode and we have your Blue Bloods recap below. On tonight’s Blue Blood Season 9 episode 3 “Mind Games,” as per the CBS synopsis, “Danny investigates a case involving a woman who shot her husband while she was drunk. Also, Anthony ignores Erin’s orders to drop an assault case; Frank holds an emergency drill for his inner circle; and Jamie and Eddie navigate their changing work-life dynamic.”

Blue Bloods begins tonight with Danny Reagan (Donnie Wahlberg) and Maria Baez (Marisa Ramirez) are at a crime scene where a husband, Richard (Scott Speiser) had been shot by his jealous wife. He says she took off as he called 911 and they can find her at any “watering hole”. Erin Reagan (Bridget Moynahan) arrives at work, where Anthony Abetemarco (Steve Schirripa) is upset with how this “new” Erin is cutting bait on cases.

Several officers are complaining about how Jamie Reagan (Will Estes) is running the 2-9 when Eddie Janko (Vanessa Ray) overhears them; they are saying it because his dad, Frank Reagan (Tom Selleck) is the PC. She hears them place bets that Jamie will be begging in a month for a transfer out of there.

Frank has a meeting with Abigail Baker (Abigail Hawk), and Sid Gormley (Robert Clohessy), they reveal Garrett Morre (Gregory Moore) is stuck in a meeting elsewhere. Frank is in the middle of trying to make an excuse to get out of a meeting when they are interrupted with a Code Red and quickly escorted to Bravo Bunker, where they use Frank’s fingerprints to allow entry. Frank reveals this is a drill and they are given a card, but ordered not to reveal anything and cannot ask any questions.

Danny and Baez are on the hunt for the wife, named Clara. Danny doesn’t seem worried assuring Baez the wife will eventually surface since she is a drunk; his phone rings and she just opened a tap at a rooftop bar, they decide to go crash the party. Garrett Moore (Gregory Jbara) apologizes for being late but finds the PC’s office in disarray and empty.

Anthony greets Mrs. Costello who doesn’t understand how she is assaulted, robbed and the police saw the bump on her head and now her case is being knocked down to nothing. He agrees with how frustrated she is that she is held at gunpoint and he doesn’t understand how the gun isn’t mentioned in the police report. He immediately calls the station and informs them to not release the prisoner.

Eddie is not getting a good vibe from Jamie about her being there. She questions about how he is getting along with the cops inside the station. He dismisses her, without even kissing her and thanks her for lunch.

A negotiator tries to talk the wife off the ledge who says she is useless for trying to kill the only person who loved her. She wants them to tell Richard she is sorry and he was right as she as never worthy of him. Danny tells Clara that Richard is okay with only a flesh wound and shows her Richard’s message that he loves her and forgives her and wants him to do whatever he can to save her as he can’t live without her. She agrees and Danny grabs her and pulls her back from the ledge.

Danny goes to see Erin, saying this case is too easy. He can’t explain but something isn’t right with this. Erin orders him to get out. Erin then stomps into Anthony’s office, hanging up in the middle of his phone call, demanding to know why she is getting emails about when she is presenting the robbery case to the grand jury? Anthony says it is 100% a better case now, but she says she doesn’t see a law degree anywhere in his office and orders him to drop it. She picks up his phone and begins a call, but he hangs it up forcing her to listen as he explains there was a gun. She wants the paperwork on her desk ASAP, noticing everyone is watching them.

Danny is positive there is something going on with Richard, but Baez is insistent Danny is wrong. Danny produces pictures of the heartbroken husband and his loving girlfriend, suspecting the wife knows about her.

The meeting resumes in Frank’s office and Garrett reveals that he spoke to Istanbul and told them he was very excited to meet with Chief Nadier during his swing through and top of his list was visiting their jails when he was there. They all laugh that Frank was going to wing it; Sid almost screws up saying they all left vanished like it was a fire drill. Garrett wants to know where they went, but Frank says it was police business and Garrett feels left out and leaves.

Jamie and Eddie meet for breakfast, she reveals that Winston and Morales came by for the rest of their stuff saying the 2-9 is pretty hardcore; surprised of the attitude of some of the cops. Eddie feels like she is engaged to a human lie detector as he demands to know what is really on her mind. She reveals that some cops were talking smack about him, he says this is something he needs to get used to now that he is their boss.

Danny and Baez visit Clara who says that Richard always tells her to do something, and she will do it. Danny wants her to focus as they want to show her something. They show her a photo of a woman, she calls her Dr. Camille McCabe (Amy Rutberg) and she reveals she is their couples’ therapist.

Baez and Danny find the door person for the building where Camille McCabe lives, but they learn she isn’t a doctor at all; she is a professor or something, but not a couple’s therapist. She lives in apartment 3C.

Anthony comes to see Erin’s office to inform her of the indictment in the Costello robbery case. He wants to say thanks but she won’t give him a thanks and is pissed that he made her look like an idiot in front of everyone and he disobeyed a direct order. She says things are different now because she is now the boss. She reminds him that he has to work with them and she needs to lead them, and she made a complete ass of herself in front of them and she can’t do that when she lost their respect, thanks to him.

Danny got McCabe’s computer from the school, since it was not her personal property. Baez finds it odd that she is a huge fan of the movie “Gaslight”, which is about a husband who drives his wife insane, slowly convinces her that everything she thinks is wrong or her imagination. She asks Danny to listen to her hunch like she did with his; he thinks they are both right.

Jamie and Eddie go to play mini golf, where Eddie says she really wants to transfer to the 2-9 now. He refuses but she says the real reason, showing him their wedding vows as they recite them to each other. She wants him to count on her and vice versa.

Frank wants Garrett’s two cents, but he is still offended saying his opinion doesn’t matter since it is police matter since he isn’t a cop. After he leaves, Frank says, “Okay, we will do it the hard way!”

Danny and Baez find Camille McCabe at the University, asking her how long she has known Richard Hayes, the guy who has her tongue down his throat. She says about a year; then they ask about the gaslighting and she asks shocked.

They interrogate her at the precinct, where she reveals Richard caught one of her lectures and asked her to drill down on it. They doubled down and she acted like a phony therapist and they drugged her with chloroform and staging an attempted murder. She pins this all on Richard, agreeing to testify against Richard in court.

Richard watches the video of Camille’s interrogation and says it is utter nonsense. Danny and Baez learn from Richard that Camille was completely in on this too, she is the one who slipped the chloroform in Clara’s drink and the one who shot him when Clara passed out. He says he can prove it as he has a nanny cam; pretty sure the shooting is on there. They review it, Danny says they’re crazy, this is good news is this gets his wife off; but puts him and his girlfriend away for a very long time! Clara watches as Richard is taken away in handcuffs.

Jamie tells the officers to get in line for role call; Officer Janko is there and he welcomes her to the 2-9. Anthony brings drinks to Erin’s office but she was on the way to his office with drinks too. They both apologize to each other, suggesting to bury the hatchet and enjoy their martini with a twist. Garrett finishes his drink and leaves the bar, where he is taken by police and quickly taken away to the Bravo Bunker and learns it was created in the wake of 9-11.

Frank explains that he expected them to be all in the office at the same time, and since Garrett wasn’t there at the time, he was deleted from the bill. Garrett felt deleted. Frank says there was no option as no one talks about the place, outside of the place. This facility is made for only the most indispensable men and women of the NYPD and Frank realizes its not just title and rank that makes it indispensable to the NYPD. He tells Garrett he is indispensable to the NYPD and he will show them their bunks and the kitchen and tells them to say a prayer that they never have to use them.

During family dinner, Eddie attempts to say grace and when everyone makes fun of her she cries and calls them mean. She leaves and everyone starts to apologize when she returns. She then calls them all a bunch of suckers, admitting it was a big joke and Jamie was in on it after the initiation from the previous week. Frank approves of the new family tradition, as Pops says, “Well done!”