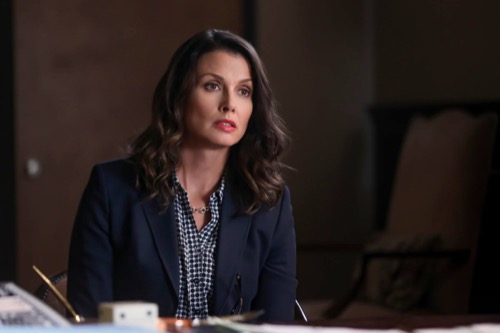 Tonight on CBS their hit drama starring Tom Selleck Blue Bloods airs an all-new Friday, October 26, 2018, episode and we have your Blue Bloods recap below. On tonight’s Blue Blood Season 9 episode 5 “Thicker Than Water,” as per the CBS synopsis, “Danny and Baez investigate a murder attempt against a celebrated fertility doctor with a seemingly pristine reputation. Also, Eddie is called to intervene in a Reagan family matter involving Danny’s boys; Erin helps Anthony find justice after a date night goes wrong; and Frank ties up loose ends with an old friend.”

Blue Bloods begins tonight with Danny Reagan (Donnie Wahlberg) getting his kids Sean (Andrew Terraciano) and Jack (Tony Terraciano) packing up the house and then heading out to the scene asking someone to take the gig as he wants to see his oldest off to college. He meets Dt. Maria Baez (Marissa Ramirez) who gives him the info on their victim, Dr. Max McCandless who was shot at 12 times into his car and only one bullet grazed his wrist.

Erin Reagan (Bridget Moynahan) can’t find Anthony Abetemarco (Steven R. Schirripa), who comes in late. She wonders if everything is okay, but he bites her head off. Cameron (Pallavi Sastry) walks in, saying there was a call from accounting saying someone charged over $8,000 on the department card under his name. Anthony dismisses her and he admits to Erin he had a date last night and this morning his wallet and Rolex were gone; he’s too embarrassed to file anything against the woman.

Baez talks to Officer Cosgrove (Racine Russell) who says everyone was took shook up from the shooting to remember anything and the victim doesn’t think of anyone who could be his enemy as he is a fertility doctor. He does have an ex-wife and two sons; both of whom he is still close to. He admits he was off to a picnic he hosts every year of all the couples he helps, they bring their kids and they celebrate. Danny feels he should skip it, but gives him an escort there instead.

PC Frank Reagan (Tom Selleck) goes to see John Hotchkiss (Vincent Spano) who is doing physiotherapy. Frank informs him that he will never be cleared to go back to active duty; he can keep an administrative post or he can cash out and collect his pension. John feels he is being shot in the back again, but knows its out of Frank’s hands. John wants Frank to find the person who refused his son Jason (Alex Mickiewicz) at the 3-7 the post at the hospital while Frank was in it and wants Frank to fire him!

Eddie Janko (Vanessa Ray) gets a call from Officer Irving (Darik Bernard) informing her that he has several juveniles drinking at the park and he has a courtesy card. Sean pleads for her to come without Uncle Jamie Reagan (Will Estes).

At the PC office, Sid Gormley (Robert Clohessy) and Garrett Moore (Gregory Jbara) discuss the daily issues. Sid says it was Jay who refused to take the post at the hospital; Frank feels it would be pretty rare as Sid says kind of like a Reagan doing that.

Eddie confronts Sean about what he did, saying she will not tell anyone about this but the card is a one time deal and he just wasted it. He believes her when she says he is a Reagan and that means he needs to hold himself to a higher standard.

Danny and Baez go to see Dr. Mccandless’ ex-wife, Joan (Alexandra Neil) and his son, Max Jr. (Daniel Sovich) who both seem to have alibis, but no qualms about how much they dislike the “good” doctor. Max Jr. tells the detectives it is time for them to leave.

Erin comes into Anthony’s office, telling him that he won’t be in trouble for the bank charges, but she also did some digging around about this Donna woman. She ran his description and is has been making a business out of this because at least 10 other guys gave similar descriptions. He feels like he is a smuck and shows her Donna’s profile. Erin wants her arrested for setting updates to steal from people; he pleads with her not to do this because if people find out they will laugh him out of the building. She reminds him that he is the victim of a crime and to start acting like one.

Erin goes with Anthony to get a subpoena. Erin is surprised how neat Anthony’s place is and feels he would be a real catch, saying not everyone has an ex they can fall back into bed with. Anthony wants to get out of the place too fast and Erin feels he is holding out on something, so he pulls out handcuffs and Erin hands him a bag, saying this goes way beyond TMI.

Eddie tells Jamie about the incident with Sean, saying it was good what she did and anyone would agree with her. Danny arrives at the precinct, saying everything is wrong with Sean, including failing classes, skipping school and Eddie getting him off the hook for underage drinking. Danny is mad at both of them for not telling him and orders them to leave the raising of Sean and Jack to him.

Anthony confirms to Erin that Donna’s real name is Maude Weaver (Breanne Racano Ferrara), who has a record as long as her legs. She doesn’t have a current address, so he suggests making a fake profile to catch her.

Danny and Baez show a photo to Dr. Mccandless who recognizes her instantly as a receptionist they hired a few weeks ago; her name is Noelle King (Sadie Friedman). She quit after her first shift, they didn’t understand why she did as she didn’t steal anything, even offering to send her one day pay with the officers if they find her.

Dt. Abigail Baker (Abigail Hawk) brings in Jay Hotchkiss in to see Frank, saying no formalities today. Jay is worried he screwed up but Frank says he only has a question for him, but he doesn’t have to answer. He wants to know if he refused a posting to the hospital when his dad was shot or did someone drop the ball? He admits that no one dropped the ball. He never wanted to be a cop but its all his dad, granddad, and uncles wanted too as policing is in his genes but not in his gut. Its too late for him to go since his dad is injured and he loves his dad. He didn’t take the post because he can’t take all that “brothers in blue” stuff. Frank promises him this conversation will stay between the two of them. Blue Bloods Season 9 Episode 5 ‘Thicker Than Water’ Recap Part 2

Sid feels Jay may have not gotten that defining moment yet. Abigail learns his family has been in the policing business for about a Century; Sid feels he shouldn’t be whining but Frank doesn’t think Jay is whining. Garrett says as a non-cop, they should look at it like him being a surgeon, would you want Jay to do surgery on you when he hates his job? Frank feels the same way, that if he were to draw his gun and freeze up – that would be his defining moment!

Erin walks into the diner and sits in the booth across from Maude, informing her that she knows of her history of arrests and that “Ryan” isn’t coming. She shows her badge and informs her that she is arresting her, and when Maude denies it all, claiming she has the wrong person, Anthony sits beside her and shows her his handcuffs asking if she remembers those and now she is coming with him; Erin smiles.

At family dinner, Nicky (Sami Gayle) asks Jack if he has signed up for his classes, worrying him because he hasn’t. They all talk about how they majored in one thing in school but ended up in entirely different careers. Frank stops them, saying not to listen to Pop on this one. He advises Jack to make the world his own, take what was useful from his time with them but don’t think he has to become them; but if he does, then he does. It’s his life, not theirs. Frank would like to think all of them chose to do what they do because they were drawn to it, not pushed! They all toast Jack “Godspeed” as he is off to college.

In the kitchen, Jamie talks to Danny feeling that Sean is trying to be a problem so Jack will stick around and keep him in line; he knows this because he did the same thing when Danny left for the Marines. Danny tells Jamie that he and Eddie are great together but they need to mind their own business. Jamie tells him to go to hell!

Erin tells Anthony she is proud of him as he agrees to testify against Maude. She suggests has a friend for him from the Brooklyn DA’s office but he is done with dating for a while.

Danny and Baez question Noelle, who confesses that Dr. Mccandless is her father. She reveals the whole story that her whole life Roy King (Ross Degraw) was her father but her parents went through IVF and apparently Dr. Magician is using his own sperm in the IVF. She found this web forum where there are other kids who felt that their dad wasn’t really their dad. Danny and Baez are worried they need to find this kid before another shooting happens.

Danny and Baez arrest the Doctor, who claims he is the victim, but when Baez says he was knocking up his own patients for years; he swears what he did was help people and this is a misunderstanding. He has a shocked look on his face when he realizes Noelle was one of those kids. As NYPD escorts Dr. Mccandless out of the building, Noelle calls Danny and they believe they have found their shooter.

Danny finds Roy King at the waterfront and tells him to put his gun down. Roy is just angry, losing his mind why the doctor would do that. Danny begs him not to do anything stupid and make it worse. Roy puts the gun down, saying he doesn’t care what happens as it’s not like he doesn’t have a family anymore. He turns around and Noelle is there, saying she would lie to protect him because he is her dad and always will be. Danny promises to make a detour on the way to the squad.

Eddie isn’t sure why Danny has them there to see Jack off. Jack tells Sean he is coming with them, so he knows the campus for when he comes on weekends; he’s happy to be included. Danny takes the moment to apologize to Jamie and Eddie, saying he screwed up, running around like his hair is on fire like usual. They hug it out.

Jay and John Hotchkiss arrive at the PC Frank Reagan’s office, where John introduces his son, Jay. Frank suggests someone with Jay’s expertise could go to the projects but would need to resign as they don’t allow a cop on the board. With his father’s blessing, he resigns as a cop, very grateful to Frank for the opportunity and not hurting his father’s honor.