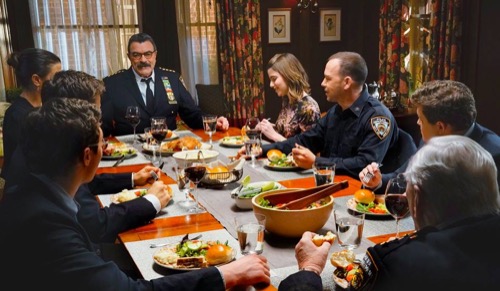 Tonight on CBS their hit drama starring Tom Selleck Blue Bloods airs an all-new Friday, April 27, 2018, episode and we have your Blue Bloods recap below. On tonight’s Blue Blood Season 8 episode 20, as per the CBS synopsis, “When Danny resorts to asking his incarcerated archenemy, Victor Lugo, for help locating a dangerous criminal who escaped from prison, Lugo refuses to assist unless he’s allowed to accompany them on the pursuit. Also, Frank subtly tries to convince Jamie to take the sergeant’s test, and Erin’s plan to go on a date with her ex-husband causes friction between her and Anthony.”

Danny goes to see his incarcerated archenemy, Victor Lugo for help locating a dangerous criminal who escaped from prison. At first, Lugo is sarcastic, but he gives in and admits he used to run with Melbatten and he knows every single place that he hides out. Lugo doesn’t want to help though unless he can accompany him on the pursuit.

Danny gives in, he knows he has no choice other he won’t be able to catch the cop killer. Anthony goes to see Erin because he car got smashed into, he notices that she is in a really good mood and she won’t tell him why when he asks.

Erin leaves the office and Anthony notices flowers on her desk from Jack. Frank is at the gun range doing some practice, he sits down with Jamie who asks if he can hold his gun which has been passed down through generations. Jamie takes it and goes to use it for target practice while Frank stares at an envelope. When Jamie finishes, Frank thanks him for spending time with him – Frank left the envelope.

Anthony is still upset about his car getting hit, Erin tells him to calm down as it wasn’t the crime of the century. Erin tells Anthony she has a date with her ex-husband.

Anthony says he doesn’t want to hear it because no good can come from it. Erin says she knows a lot of people don’t like Jack, Anthony admits he doesn’t either, Erin gets mad and storms off. Lugo guides Danny to Melbatten’s girlfriends’ apartment. Danny heads upstairs with a team and they break down an apartment door, there is nobody in there named Molly, just a family enjoying a meal together. All of a sudden Danny sees a suspicious girl who begins to run, he runs after her.

While running after her Danny gets hit by a car, the girl takes off into the subway. Danny is ok, he goes to talk to Lugo and gives him heck for giving the wrong apartment number. Anthony brings cupcakes to Erin, a peace offering to say he is sorry.

Both are remorseful and just want to make up with each other. Anthony leaves the office and gets a text message, he finds out the license plate of the car who smashed him belongs to Jack. Henry asks Frank if he gave Jamie the envelope with the sergeant test – he says yes, well sort of, he just left the envelope with him but said nothing

Danny and Maria got Molly by following her with facial recognition throughout the city. They are questioning her and she won’t give her anything. Danny threatens to take her phone and trace it, she tells him to take it.

Danny leaves the room and gives Lugo more heck, he asks if what is going on. Lugo tells Danny he has something that will make Molly talk. Danny goes back in to talk to Molly, tells her phone is clean – he says he has an address and was wondering if she knows it. Molly says nobody knows that address it is her mother’s house. Danny tells her that he knows Melbatten was paying her mother’s rent and wants to know if she is here illegally. Danny suggests that her mother might get deported, Molly tells him that he wins.

Anthony calls in Jack and tells him to stay the hell away from Erin, he also says he knows he owns the car that smashed his car and he saw him with another woman. Frank calls in Janko and she thanks him for putting up the sergeant’s exam, she is thinking of taking it. He then asks her if she knows if her partner is taking it and she says that even if she did, she couldn’t tell him.

But, when she heads out the door, she tells Frank that Jamie gave her his application so he probably won’t be taking the test. Danny and Maria head out to Molly’s mother’s house while Lugo stays in the car. Lugo realizes the whole thing is a setup and texts, Danny, to get out as soon as possible; they get out and the apartment blows up.

Danny is furious with Lugo and wants to know how he knew it was a setup. Lugo says that he was just thinking that Molly liked booby traps and he thought this could be one. The next day, they see Molly get in a car with Melbatten. They chase after them, get them to stop and Melbatten pulls out a gun, they shoot him; Molly gets handcuffed.

At the station, Erin hands Anthony a cheque from Jack – it is a company car, his partner was driving it at the time of the crash. Erin tells Anthony that she thinks it is really sweet that he was looking out for her. Frank goes to see Jamie who doesn’t look too happy. Jamie brings up the sergeant’s test and says he is not going to take it. Frank tells him that he has enormous talent that he is not maximizing.

Frank leaves frustrated. At dinner, everyone is hungry and fed up that Jamie is late. Erin asks Henry if something is going on, Frank says he has no idea what is going on. Jamie finally shows up and apologizes, he says he was helping his partner study for the sergeant’s test.