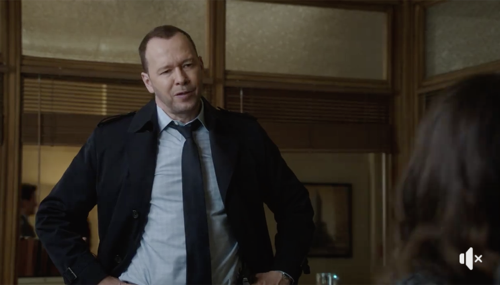 Tonight on CBS their hit drama starring Tom Selleck Blue Bloods airs an all-new Friday, April 6, 2018, episode and we have your Blue Bloods recap below. On tonight’s Blue Blood Season 8 episode 18, as per the CBS synopsis, “After a woman voices her outrage regarding the NYPD’s inability to find her son’s murderer, Danny reexamines the case, upsetting the original detective, Erin, and Anthony, who didn’t pursue the case due to lack of evidence. Also, Eddie is shot while on duty; Erin and her ex-husband, Jack, face off in court; and Frank contends with an angry police force when Mayor Dutton fails to defend them at a press conference.”

A cop shooting had left everyone on edge on tonight’s all-new episode of “Blue Bloods” and it had even managed to touch the Reagan household.

Jaime and his partner Eddie were responding to a domestic disturbance when they came across a scene between a couple and the officers trying to calm them down. The partners had done their best to assist the cops first on the scene and had even helped to disperse the crowd that had grown when the suspect the police were speaking to had decided to make a run for it. Malcolm James had pushed the police officer that was restraining him and ran up the stairs, but Jaime and the others went after him for his assault on an officer and as they were chasing him he suddenly stopped to turn back. He had wanted to shoot an officer and that day he shot two. He shot Officer Andrew Dunleevy and Eddie.

Eddie’s bullet had hit her vest and so she was fine. She got the wind knocked out of her and had needed to stay in the hospital overnight because she fell down the stairs however she assured everyone she was ok and hadn’t wanted to be admitted. The others actually had to make her go to the hospital and so she at least got to complain about the day’s events. The other officer hadn’t been so lucky! Officer Andrew Dunleevy, unfortunately, died at the scene and his death kicked off a manhunt that resulted in Malcolm being arrested that same day. The police had caught Malcolm so fast that Janay Brown had been offended. She had lost her son who died five months before and no arrests had been in his murder.

Hence Janay decided to stand outside the local police department every day until the man that killed her son was arrested and, surprisingly, her shouts had won her Danny. Danny had been heading into work when he saw as well as heard Janay and he at least had asked her about her son. Her son was Amir Brown and he had gone out one night to celebrate his friend’s birthday when someone ran up to him as he was leaving and shot him. Janay said it had been one-hundred-forty-six days since it happened and her son still hadn’t gotten justice because he had been the wrong sort. He had a record and was from a bad neighborhood while the man that shot the cops was found that day and so Janay was just asking for the same for her son’s murderer.

Janay had made such a case that Danny decided to look at it. He had asked for the case to review it and him merely looking at the case had been a sign of disrespect to the detective who was stilling investigating it. That guy had almost gotten into a fight with Danny because he thought Danny was stepping on his toes and so Danny ended up taking the case as a way to both help Janay as well as tick off the other guy. So Danny later began his own investigation into what happened to Amir Brown and he did that by bringing in Janay. Janay hadn’t liked repeating herself and she had tried to keep her attitude yet Danny reminded her that her that he was trying to help and so she calms down enough to tell him the rest of the case. Like how her son’s best friend had identified the shooter.

Danny had asked if she was sure and she had been. The cops spoke to the friend and it turns out he had identified the shooter, so Danny went to the other detective to ask how the shooter got away and it turns it had been because of his sister. Erin had wanted to go ahead with the case because the friend hadn’t identified the shooter in a proper line-up. He had gone to the station to give the cops a description and had seen Corey DaSilva in the back of a squad car. That’s how the friend identified him and unfortunately a good attorney to get that thrown out of court because the fact the friend saw DaSilva in the back of a squad car could have colored his view of him. And so Danny had gotten angry about that because he believed his sister could have done more and she should have had tried to go after the shooter another way.

Only there was nothing Erin could do. She had issued the search warrant and the police hadn’t found the murder weapon back at DaSilva’s home therefore all they had was a messed-up identification. Erin could try case on that alone and so Danny tried to find more evidence. He and Baez had a hard time finding any because it had been five months and, with nothing to go on, Danny decided to canvas the neighborhood. He went back to the nightclub and tried asking people as they were leaving if they recognized Amir. And they hadn’t. It had been too long and so all Danny got was a store owner that remembered that night. The owner had heard the gunshots and had seen the shooter run down the street until he had stopped right by the gutter.

Danny knew what that meant and, due to timing, he was joined on his hunt threw sewage by Anthony. Anthony had wanted to help close the case and so they did the world’s dirtiest work until they found the gun. The gun was a match for Amir’s murder and it also had DaSilva’s fingerprints on him. Danny was able to go Janay afterwards and tell her that they finally got the guy. She had been fighting for her son because she had wanted justice and she was grieving, so Danny told her that he had lost his wife and that he had stopped a certain tradition she started because he had just been too sad. He also added that he was trying to get back into Family Game Night again and so he didn’t want Janay to let life pass her by because she was in too much pain to move on.

Danny had left Janay with those words and hopefully, she will get to that better place, but Officer DunLeevy’s family had to suffer through the worse of the media’s attention because of the new Mayor. Mayor Margaret Dutton had held a joint press conference with Frank and together they were just supposed to give out the information they had on file. They weren’t supposed to go off and say that there needed to be an investigation into what happened because the shooter felt threatened by the cops. Yet, that’s what the Mayor implied when she said a man of Malcolm’s background would run when confronted by the cops and that the cops were chasing him when he shot them. And so the Mayor made a mistake.

Mayor Dutton said a few things that turned into sound bites and it had made look like the cops that were answering a domestic call were somehow in the wrong. It had gotten so bad that all the cops had turned their backs to her when she tried to show up to the slain officer’s funeral and she had chosen to leave because she could see she wasn’t there. In fact, she wasn’t in other areas as well because the Mayor went from being a public advocate to having to think about politics and she wasn’t good at it. She constantly put her foot in her mouth and so she later told Frank that she was leaving the job. She was going to stay on until the election and then go back to public advocacy. And it wasn’t until that she was stepping away from that life that she finally became friends with Frank.

Frank had pulled back on how the officers were treating her and he admitted that he was going to miss her when she goes although he told her he would ditch his detail and take that walk with her in Central Park that she’s been missing ever since she became mayor. And Frank had also said he was going to miss working for her when she told him that it had always seemed like the other way around. Meanwhile, the man or in his case men they were fighting about had later confessed his own guilt. He admitted that he had shot the cop because of it part of a gang’s new initiation and that he was only supposed to shoot a cop. He hadn’t meant to kill anyone and so what happened had been part planned/part accident except it had created a rift in public opinion. There were people on his side until he confessed and a few of them forgot what happened to the officers. Like how one husband and father was never going home again while Eddie had to be hospitalized.

Eddie was eventually given a clean bill of health and signed out of the hospital, however, Jaime had realized he didn’t want Eddie to die or leave without telling her how he felt and so he came close to admitting to his feelings when he stopped himself because Eddie had a new boyfriend.

The guy’s name was Barry and he was a really nice guy.