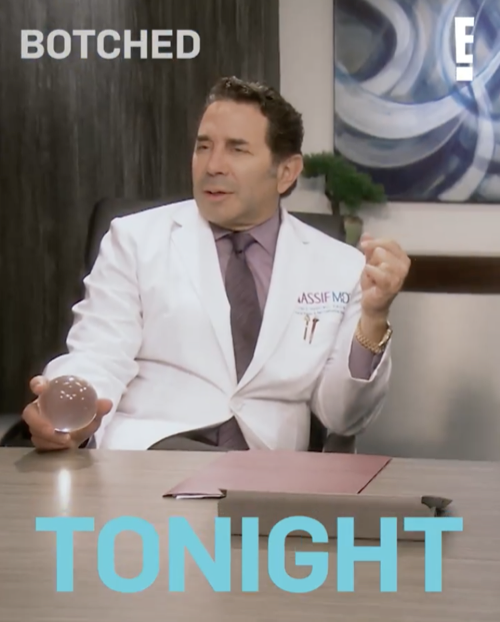 Botched continues tonight with an all-new Thursday, December 6, 2018,  season 5 episode 1 called, “Knockers on Heaven’s Door” and we’ve got your Botched recap down below! On tonight’s season 5 episode 1 per the E! synopsis, “Tameka Harris and her best friend seek the help of Dr. Dubrow.”

The doctors were back for an all-new season, but they were still dealing with the crazies on tonight’s all-new episode of “Botched”.

Pixee was back in town and she wanted to see the doctors about another procedure. They had seen her some years ago when she wanted to look like a human cartoon and the doctors had turned down her surgery because they knew she needed help. Pixee was suffering from body dysmorphia. She thought that she wanted to like a cartoon rather than a normal person because cartoons were beautiful to her and so what she really needed was someone to tell her no more. Like what the doctors tried to do. They tried telling her that she wouldn’t look beautiful if she kept chasing after surgeries and distorted her body until it looked like a joke. And she had needed her heard to them, then went and found other doctors that weren’t as principled.

Pixee went on to have over two hundred procedures because people were just taking her money. They fractured her face to give her a smaller shape, they “redesigned” what a human vagina was supposed to look like, and they even took her pubic hair to create eyelashes. Pixee thought she looked beautiful because of her surgeries and instead it looked like she could topple over. She had an inhumanely small waste and giant implants. She could easily topple one day and until then it was a waiting game. Pixee thought that she could convince the doctors to carry out even more radical procedures and so while she was waiting for hell to freeze over – they were treating actual patients. As in people that really did need help.

The doctors first saw Nuray. Nuray was a model from Turkey. She had moved to the States to start working in Las Vegas and she was doing really well for herself. Nuray was very beautiful and so she was booking jobs left, right, and center. She didn’t have a problem with finding work until she began to feel self-conscious about her looks. She was getting older and she thought she needed help to compete with some of the younger girls. Nuray had gone home to Turkey for a visit and she had heard about a procedure when she was over there. The procedure was supposed to take fat from her body and inject in her face as a way to cut down on ever needing fillers. Nuray thought that the procedure and so she went ahead with a doctor who used her as a guinea pig.

The doctor that performed the procedure had never performed it before. Nuray was the first time they ever did it and there had been complications with Nuray’s surgery. Her body was rejecting the fat and so the doctor had to force it in. The doctor injected more under one eye than the other and it had looked horrible. It looked like Nuray had been punched in the face with the way her eyelids were swollen and so Nuray had to get it out. She thought her eyes would return to normal if it did and unfortunately she was left with great sags under her eyes in its place. It was so bad that people no longer wanted to hire Nuray. She would send out photos and then they would mysteriously change their minds when they saw her in person.

Nuray desperately wanted to fix the bags under her eyes and the doctors weren’t sure if they could help. They said that one wrong move could prevent Nuray from ever blinking again and so there were going to be risks with a surgery that could help. Nuray understood that and she wanted to go it for it anyway because she wanted to recognize herself at the day. So Dr. Paul called in a friend to assist with Nuray’s soldier. They were going to be incisions and remove the fat that must have attached to the muscle. They also had to make sure to remove the right fat or they risked the current fat growing back if Nuray ever gains weight. And so Paul had to settle on removing the majority of the fat because he knew he couldn’t remove it all without risking the muscle.

That was Paul’s procedure!

Dr. Terri Dubrow was called in for Sharma’s procedure. Shamra was a manager. She helped managed her daughter’s music career and has long since been in the business. Shamra was another beautiful woman. She had her daughter young and she thought her breasts were sagging. She wanted to fix and so she had gotten implants as well as a tummy tuck. To save time the two procedures were actually done together. The doctor had inserted the breast implants by going through Sharma’s naval and then he had fixed that region. He had left Sharma without any scarring and she had enjoyed it at first. She thought her breasts had been fixed and everyone had complimented her. And well the problems came when one of her implants began to harden while the other drooped.

The implants weren’t put in right and eventually, Sharma found herself with breasts that looked worse than her originals. She even had to ripple with one breast and so Terri wanted to remove both implants as well as release the capsule on one. He knew that releasing the capsule would allow the breasts to take on a natural shape rather than the baseball look she had. Terri also found as he went in there that there was a foreign substance in her breasts. It had looked and felt like putty. IT was also everywhere and so Terri had to clean that out. He came to realize that because her implants came in through the naval that it might have come into contact with bacteria from her stomach.

It’s why implants shouldn’t come through the naval and so the doctor that did Sharma’s first breasts implants had really let her down. Terri had been able to fix the other doctor’s mistakes and he got Sharma looking healthy as well as even.

Nuray also got her face back because Paul removed the heavy exaggerated bags under her eyes and so all of her friends had been happy to see her face look its normal beautiful self.

But no matter what she said or tried to do, Pixee was never going to convince good doctors to lower her hairline just because she restructured her face and wants her face to look even smaller.

Terri and Paul weren’t those kinds of doctors!