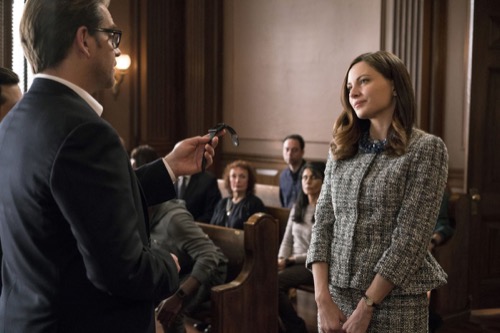 Tonight on CBS their  drama Bull inspired by Dr. Phil McGraw airs with an all-new January 9, 2018, episode and we have your Bull recap below.  On tonight’s Bull season 2 episode 12 as per the CBS synopsis, “Bull takes a psychologist friend, Dr. Donovan Benanti, as a client when the therapist is sued for malpractice following a patient’s deadly rampage. As Bull worries a trial loss could set new precedent regarding doctor-patient confidentiality, he aims to convince the jury that clinicians aren’t directly responsible for their patients’ actions.”

Bull heads to dinner with an old friend. They haven’t seen each other in a while. He needs a favor. He is being sued for malpractice. His client, Lex, who has intermittent explosive disorder and PTSD, walked into work after being fired and shot the partners of the firm and himself. The widows of the partners are both suing Dr. Benanti, a clinical psychologist. They believe the doctor had knowledge of the incident and he could have stopped it.

Benny heads to the judge’s chamber the next day. Bull and the team think it is best to settle. Benny tries but the judge wants to bring it to trial.

Benanti arrives at Bull’s office before jury selection. Bull asks him if he knew that Lex was shooting at a gun range. He did. He thought it was a healthy way for Lex to release his anger. Bull isn’t happy. It makes them look bad. At court, Benny sifts through the pool of people.

Danny finds something interesting she brings to Bull, a referral on the top of Lex’s first session lists the same last name as one of the widows. A Mrs. A Harper

In court the next day, Mrs. Harper takes the stand. All of the jurors are sympathizing with her. Benny stands for cross-examination. He asks Harper about why she would refer Lex. She explains that she was a patient of Benanti’s. He was thorough and helpful. She thought he could help Lex. Benanti watches her give her testimony with a smile. Bull feels uneasy about their relationship.

During recess, Bull finds the doctor in the bathroom and questions him about his relationship with Harper. He swears he never crossed any lines. He admired her and that was all.

Chunk comes into Bull’s office. He hasn’t slept all night. He has been poring over Lex’s files. Something isn’t sitting right with him. Chunk assures him that their mock trial went great.

Bull asks Danny and Cable were Lex got the gun. They haven’t tracked down the source yet but they know it was a berretta. Bull leaves quickly and heads to the doctors. At the door, he demands to see his gun. The doctor lets him in and shows him the case but when Bull asks him to open it, the doctor tells him he knows where it is. He gave it to Lex. He asks Bull if he believes in destiny.

The doctor tells him how he loves Harper, but knew he couldn’t have her until Lex came to his office mad that he was fired. He wanted to kill his boss Mr. Harper. The doctor explains that he just helped him along.  They both got what they wanted. Bull is beside himself. He cannot quit and he cannot tell anyone, the doctor reminds him. Bull spits at him before storming out.

At court the next day, the doctor takes the stand. Marissa talks to Bull through his earpiece, telling Bull that Benny is doing excellent and that the doctor is terrific. Bull looks like he is going to be sick. After the jury finds the doctor innocent, Bull leaves without a word. Later that night, he heads to Harper’s. She won’t. He asks her from outside why she would take the man she loves to court. She is dumbfounded. She wasn’t in love with him. She loved her husband and misses him. Bull wants to help her and make things right.

The next day, Bull calls the entire team into the office except for Benny. He wants them to help get the doctor in trouble and he didn’t invite Benny because he doesn’t want him to lose his license. Bull has concocted a plan to have Harper go to dinner with the doctor. Once she pulls him in and he drops his guard, they will record his admission of guilt. They all agree to take part.

Bull preps Harper before her dinner date. He will have Chunk and Danny on standby at a different table. Harper manages to get through most of the dinner. Once the doctor confesses he talked Lex into killing her husband so they could be together she loses it. But they got what they needed! Bull is happy.

Bull visits the doctor in prison the next day. The doc knows he was behind this and he will prove it. Bull laughs at him.