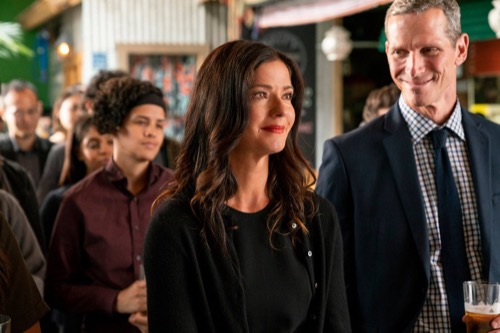 Tonight on CBS their drama Bull inspired by Dr. Phil McGraw airs with an all-new Monday, October 15, 2018, episode and we have your Bull recap below.  On tonight’s Bull season 3 episode 4 as per the CBS synopsis, “Business becomes personal for Bull when TAC assists with a civil suit against the bank that funded the terrorists responsible for Cable’s death. Also, Marissa enlists her former homeland security co-worker and international banking cyber-investigator, Taylor Rentzel, to help with the suit.”

Bull gives a speech about Cable at her funeral. After the funeral, he tells Cable’s mother to call if she needs something. She admits she cannot go pick up Cable’s things at the police station. He tells her he can go.

A news report reveals that the bridge Cable died on was blown up, an act of terrorism. Later, Marissa and Benny come to tell Bull they found the terror cell. They were from Prague and they were all killed.

Marissa wakes to a call. It is Bull. He comes up at 3 am and wants to talk. They drink coffee. Greg comes out. He isn’t happy Bull is there and that he does this often. All 3 sit and Bull talks, he wants to make someone pay. He is going to go after the banks.

Bull meets with a well-informed man in the banking industry who tells him Thoreau Financial is one he can never take down. The CEO Honaker is too powerful. Later, Marissa coaches the team. Bull wants to sue the CEO of Thoreau. Benny tells him he cannot sue, but Cable’s mom can. He goes to see her. She agrees and she doesn’t need her husband consent, he isn’t Cable’s real dad. She tells Bull to do it and make it hurt.

At the office, Danny is upset and wants to tell Bull something. Marissa steps in. She’s got this. She tells him they need to hire someone to take Cable’s position. Bull doesn’t want to do it. Bull pulls an all-nighter. He falls asleep and wakes to someone listening to music.

Her name is Taylor and she used to work with Marissa at Homeland Security. She is doing her a favor. She and Bull sit. She has found a connection between the terror cell and the CEO.

Benny receives a letter, a motion to dismiss. He heads to court and fights it. Meanwhile, Cable’s mother comes to Bull’s office and tells him a man tried to settle with her this morning on behalf of Thoreau. He wouldn’t identify himself. She told him where to go.

At court, Benny works through the jurors to create the best possible pool for them, one that would focus on the details.

Bull and the team sit and go through what they have. They are all impressed by Taylor. Danny has a lead on a man who is dying. He worked at Thoreau for 9 months writing code. Chunk meets with him and talks to him about taking the stand. He agrees. Benny questions him. He admits that the president of the bank had him create bypass codes to avoid alerting the government to any suspicious banking. He discovered the code was being used and he reported it to Honaker. After, Honaker’s lawyer wants to talk to them. They want to settle for $25 million. Bull chuckles. The lawyer asks what he wants. Bull admits that he wants Honaker to hurt, like Cable’s mother hurts.

At court the next day, they lose their whistleblower who died. The jury must forget his testimony. That night, Taylor brings Bull a picture linking the CEO to one of the terrorists. But she hacked it from an NSA server so he cannot use it. She will go to jail. She tries to take it back but he won’t let her.

At court, Benny and Bull bomb the opposing side with a photo. Bull tells the judge they got it off the internet this morning. The judge lets Benny question Honaker who says he isn’t sure that the photo is him. Benny presses him over and over. The jury finds Honaker guilty. Cable’s mother gets $100 million. Benny gets upset because as they all head out of court Honaker doesn’t look so upset. Bull tells him to wait a minute. Bull’s friend comes in and takes Honaker away in cuffs for helping a terrorist.

Bull meets Taylor at the park. They talk. She agrees to come work for him.