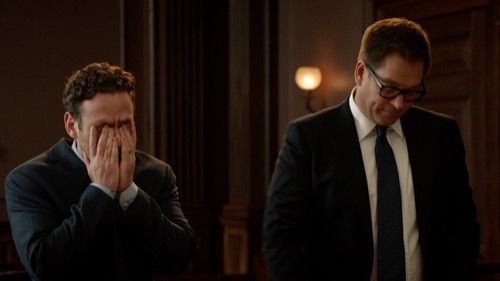 Tonight on CBS their drama Bull inspired by Dr. Phil McGraw airs with an all-new Monday, November 12, 2018, episode and we have your Bull recap below.  On tonight’s Bull season 3 episode 8 called, “But for the Grace,” as per the CBS synopsis, “Bull takes on a pro bono client who was poorly advised by his public defender to plead guilty to a misdemeanor assault charge and is now facing felony manslaughter after the victim dies.”

A couple waits in line to get into a store. A man allows three of his drunk friends into the line. The woman gets mad. They all start to argue. The four men attack the husband. A cop arrives and sends them all to jail.

The man gets a public defender who talks him into pleading guilty. He finally agrees because he doesn’t have the $5k bail.

The public defender goes to see Benny after she learns the husband Chris has been arrested after one of the men slips into a coma. She feels horrible. She told him to plead guilty, it was the easiest and cheapest way to get him off the hook. She pleads with Benny to help and take is as a pro bono.

Benny and Bull talk. Bull agrees to take the case since they really don’t have to do much. Benny thinks Bull can snooze the ADA and they won’t even have to go to court.

Bull meets with the ADA who isn’t budging. Bull tries to get him to drop it, but he is pretty cocky and it’s his first manslaughter trial.

At court, Benny calls to revoke their client’s guilty plea. They put his defender on the stand and she explains what happened. It pains Benny to ask the questions that ultimately show the defender told the client to lie. The judge decides she will report her the public defender to the bar and she refuses to revoke the guilty plea. After court ends, Benny and Bull talk to Chris who is served with divorce papers at the worse possible time.

The next day at court they work to create a jury pool. Meanwhile, Danny goes out on a date with her new boyfriend Gabriel. A woman shouts for help, her husband is hurt. Gabriel recognizes he has a collapsed lung. He helps the man and then tells Danny they need to leave right away.

Benny cross-examines the police officer. It goes well for them until one of the men paints Chris as a drunk. He looks angry and the jury sees it. Bull and Benny talk to him in the chambers and he loses it even more.

On their way home from court, Benny gets a call that Chris got into a fight at jail an has broken his wrist. Now they cannot put him on the stand.

Chuck meets with Chris’ estranged wife. She talks about lying in court. He tells her they do not do that.

Danny goes to see Gabriel to get answers. He admits he was a surgeon before coming to the states. He wanted to get out of there because he doesn’t want to go home where he will be killed.

In court, the prosecution plays audio from Chris and his wife’s visit in jail.  She is heard saying she would lie. Another blow to Benny and Bull’s efforts. Outside the court, Benny talks about how new ADAs often have a scoring system so they can get on felony cases. Bull remembers seeing a scorecard at the ADAs office. He heads there and takes a photo. Benny presents it as evidence in court as he ridicules the ADA for turning this case into a stepping stone for himself, forgetting about justice and honesty. The ADA stumbles over his words and admits he would benefit from winning.

Benny presents his closing arguments. A very short time after the jury decides Chris is not guilty. They are all thrilled. The ADA leaves quickly.