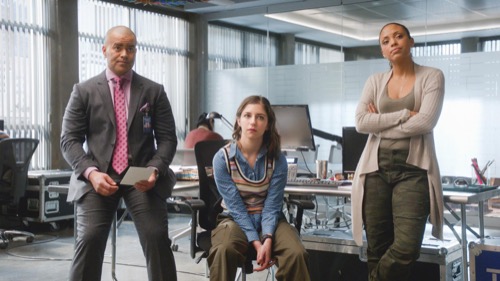 Tonight on CBS their drama Bull inspired by Dr. Phil McGraw airs with an all-new February 9, 2018, episode and we have your Bull recap below.  On tonight’s Bull season 2 episode 13 as per the CBS synopsis, “A widow hires Bull to help represent her when the police decide that she is the most likely suspect in orchestrating her wealthy husband’s death, making it look like a home invasion gone wrong.”

Marrisa was approached by Assisted U.S. Attorney William Flannigan on tonight’s all-new episode of “Bull” because he needed her to convince her boss to take a belse.

Flannigan was about to take a hacker from Brooklyn to trial for hacking into the Air Traffic Control System and nearly bringing down two planes however what the hacker did had had far-reaching consequences. Air Control had been forced to ground air traffic all over North America for almost a week until they were sure their systems were safe again. But as the case is very nuanced, it was going to be hard to explain to a jury why this hacker was dangerous. Flannigan knew that he was going to be talking cyber lingo to a bunch of people that wouldn’t understand a single word of it and so he needed Bull to help get the seriousness of the case across.

Flannigan had reached out to Marissa as an intermediary because he knew that she had worked at Homeland Security and that she would be one of the few to understand that what happened had been a terrorist attack. The hacker had could have easily killed thousands or worse he could have held onto his control until the government agreed to pay him off. So Flannigan was able to reach Marissa and she went to bat for him with her boss. Bull was convinced he should take the case and be even willing to follow all the necessary protocol to work the case with Flannigan. Flannigan had demanded that they all be given background checks and that at no time were cells allowed.

Neither Flannigan nor the FBI had wanted to risk being hacked again and so the case being closely monitored. Bull’s own people were told that they weren’t allowed to discuss the case with anyone and so he would never have assumed that one of his own would break that rule or that it would be Cable. Cable sort of knew the hacker. He was the husband of her college roommate and this old friend reentered Cable’s life to ask for her help to prove he was innocent. She said her husband, Malcolm Swift, had been hacked himself. He had been miles away from his computer that he had left at home because he had been working.

Malcolm was someone that hacked for a living. He was often paid to hack into companies to see where their own security was at its weakest and then he helps them to sure up their security to prevent any other hack in the future. That’s what Malcolm claimed he was doing for another company at the time of the hack and so he tried to tell the government that he couldn’t have done it, but hacking is again very nuanced. It could be very hard to check and so, when it did come back as Malcolm’s work, they figured it couldn’t have been anyone else. They knew a digital signature was hard to fake and the fact it matched so perfectly told Flannigan all he needed to know.

Flannigan, the FBI, and the government were all in agreement. Malcolm hacked their Air Traffic Control and will be tried as the terrorist they believed him to be. The only one that didn’t believe Malcolm was guilty was his wife Sarah. Sarah had gone to Cable because she said her husband was being railroaded and that he couldn’t have done it though, to get Cable’s help, she told her friend about her news. She told Cable that she was pregnant and that the father of her baby couldn’t be known as a terrorist. So Cable agreed to help. She knew she was going to be checking out the laptop anyways because Bull had asked her to do it and so she figured that she might as well take a second look at the signature.

Cable looked at the computer to ensure that there wasn’t a third-party that had used Malcolm’s computer without his knowledge and she had seen for herself that the signatures matched. Malcolm had hacked Air Traffic Control and Cable was thinking about how she was going to tell her friend this when the computer started to glitch. It began erasing everything that was on the laptop and so it was only later that Cable realized her friend used her to introduce a virus onto the computer’s hard drive. It was the virus that had wiped the whole laptop clean and without that piece of evidence then odds were that Malcolm was going to walk.

Cable knew that she had been played and so she knew that she had to be the one that told Bull what she did. She waited for him at his office and then confessed to accidentally tampering with evidence. Cable explained that her friend had played her and that she was sorry, but Bull knew that what she did was too big to hide. He contacted Danny to see if there were any strings she could pull at the FBI to cover up what Cable did and unfortunately the one person she could turn to hadn’t been able to help. He instead had issued an arrest warrant for Cable for tampering with evidence and she was sent to jail while Malcolm was released.

His lawyer was able to declare Cable’s misconduct as a prosecutor’s fault because she had been on their team and so Malcolm was released however he never got the chance to join his wife abroad because Cable had figured out his motive for why he hacked Air Traffic Control. He had hacked them because he wanted to get information on secret government planes that were flying under the radar. Those planes, as well as the knowledge of where they were going, was a valuable asset that Malcolm could sell to the country’s enemies and so proof of that allowed Flannigan another chance at trying him for his actions.

All Bull wanted in exchange for that information was Cable’s release through the fact she put everything they worked for at-risk means she will most likely have to find another job and her relationship with Bull might just be over.