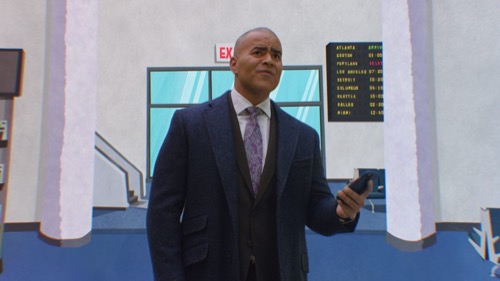 Tonight on CBS their drama Bull inspired by Dr. Phil McGraw airs with an all-new March 13, 2018, episode and we have your Bull recap below.  On tonight’s Bull season 2 episode 17 as per the CBS synopsis, “Bull agrees to help Chunk’s daughter, Anna (Jazzy Wiliams), when her journalism professor, Chloe (Nikki M. James), is sued by a dating app developer for trying to steal data for an exposé she’s writing about sexual assault cover-ups. But the stakes are raised when the company alleges that she actually stole proprietary information and intended to sell it to a competitor.”

Chunk’s daughter was in town on tonight’s all new episode of “Bull” and she had wanted to introduce him to her mentor/role model.

Anna Baker had only gotten her scholarship because Chloe Tomlin had recommended her and so she owed Tomlin. Tomlin carried a lot weight at the school and so Anna had been excited to meet her for prep with her father, but as it turns out Tomlin had had other things on her mind. The journalism professor had recently gotten arrested as she was pursuing a lead for one of her stories and so she had apologized Anna when she saw her. She couldn’t meet with Anna or give her advice about the school year because she only had a little time to pack up her things and so Anna had looked to Chunk for help.

Anna knew Chunk worked with people that could help Tomlin and so she eventually wore her father down until he agreed to bring Tomlin case to Bull. Bull had thought the case was interesting and so he brought in Tomlin to hear her whole story. It seems she was following up on a lead. The lead had been a woman named Megan and Megan had made a date on Spark4U however she hadn’t liked the date and had tried to walk away when her date followed her. He had used forced her into the alley and had raped her, so Megan had reported the crime. She had gone to the police and they had asked for information on the date.

Except the date had used a fake name and had signed up on a public server. In other words, he had been smart enough to hide his identity because he knew he was going to hurt this girl and he wasn’t the first. There had been other reports of guys using the dating app to rape girls and so Tomlin realized these ladies had a case because Spark4U had claimed to have security protocols protecting people from such incidents. So Tomlin had began writing an article about what she found and she had needed more information on Spark4U when an inside source had reached out. This source claimed they could get her into the building and the information she needed.

Tomlin therefore had gone to the building and was doing just fine until the security protocols had alerted everyone to her presence. She said her source had found given her good information and that she wouldn’t have been caught if those protocols hadn’t changed that day yet that didn’t change the fact that she was called and that her simple B&E had turned into something else. The AUSA in charge of the case had claimed that Tomlin stole proprietary code and therefore trade secrets. She said that Tomlin was caught committing corporate espionage and so she was trying to send Tomlin away for thirty years.

Tomlin on the other hand had had no idea what the AUSA was talking about. She told Bull’s team that she had just wanted information on the perps and victims of the app and so they had gotten their new tech guy to check it out for them. Isiah had opened the drive Tomlin had taken and what he found could be described as new tech belonging to Spark4U. Spark4U had come to an agreement with advertisers that allowed advertisers to recommend a place in the area of the two people hooking up through the app. It thus had nothing to do with Tomlin or her story and so Tomlin had been confused when they told her what had really been on the drive.

Tomlin said she never meant to take any of that and that her source had told her where she could get the information she was looking for, but it seems the source was either wrong or misleading Tomlin and so the team had wanted to know who this source was. Only Tomlin wouldn’t tell them and she couldn’t see how bad things were going for in court. The court had heard all about her ex-boyfriend that was working with Spark4U’s competitor, how her editor had never heard about Tomlin’s story (a lie), and they had had proof she went looking for trade secrets because that’s the drive she had opened.

What the court needed to hear was that her motives had been altruistic and so they found one of the women that had gone to Tomlin for help. They had found Bridget had testified that she had asked Tomlin for help in revealing what happened to her and the coverup though she also revealed that she had gone back to Spark4U demanding help and that they had agreed to pay her off if she signed an NDA that meant she couldn’t talk to a journalist anymore. So that showed Spark4U knew about Tomlin and to make things worse they had also been the ones that had set her up. The company had hired a fixer company that had been behind the emails to Tomlin and so it seems the company had wanted to frame Tomlin in order to keep the rapes a secret.

Benny had later tried to prove what they did by getting someone from the fixer company up on stand and all that person did was plead the fifth. So they had tried to find another way of proving the company tried to cover up the sexual assaults and it had actually been Marissa that found the way. She said Tomlin had been given someone’s key card and that it must have belonged to someone from the company, so they looked into it and they found out the keycard belonged to the owner of the company. Gatewood had gotten a replacement card for himself and then proceeded to use his regular card because he had the fixer give the replacement to Tomlin. That’s how Tomlin had gotten in and so once Benny proved that in court – it had been all over.

The jury found her not guilty and that allowed Tomlin to publish her story, but she was going to publish at a different paper. Her last paper had thrown her under the bus and so Bull told her to find somewhere she was comfortable. And as for Anna, Chunk had told her that Tomlin would probably give her an A for life if she chose to go to that school and as it turns out Anna had gotten plenty of offers. She had also been another scholarship from Columbia and had even hugged Chunk as they began to celebrate.

The two of them still had a few problems to work out because Chunk hadn’t revealed he was her father until she was eighteen and so Anna showed tonight that she was slowly coming around!