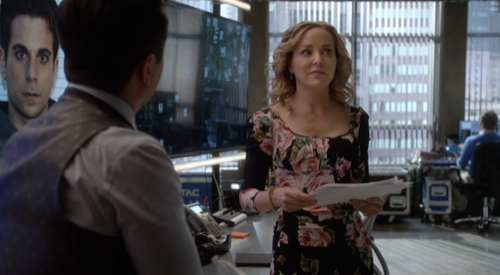 Tonight on CBS their drama Bull inspired by Dr. Phil McGraw airs with an all-new May 1, 2018, episode and we have your Bull recap below.  On tonight’s Bull season 2 episode 21 as per the CBS synopsis, “Bull’s team takes on the case of Elliot Miles.”

Officers are outside a home. It is the night. A house has been lit on fire. A husband and wife are inside. They are dead, having been burned alive tied to a chair. The wife was raped before her death. Their daughter was not home. Their car was stolen.

Police pull over a man in a silver SVU, the same car that was stolen. The man inside gives the police a card that says “I am mute.”

Benny tells Bull that his sister, Bull’s ex-wife, is getting remarried. Bull doesn’t take the news lightly. He gets drunk and calls Marissa hours later after he lands in jail. Inside, he meets a mute man.

Marissa and Bull are in the car. She is worried about him. He tells her he found out his ex is getting remarried. She doesn’t care. He hasn’t been himself for months. He lives in his head and drinks too much. His clothes don’t fit. She wants to admire him again not worry about him. She gets out of the car. Bull sees the newspaper. The mute man is on the front page.

Bull goes to the jail to meet the man. He tells him he wants to help him after the man says he didn’t do it.

Marissa updates the team about their new case. They are all in disbelief. The man, Elliott, has a weak alibi and says he bought the SVU from a man at the bus stop.

Bull shows up the next day at work with a new suit on and a good night’s sleep. Marissa is surprised. The team meets to go over the case. They are all skeptical. But Bull knows in his heart that he is innocent. He wants to create reasonable doubt by looking for a jury pool who looks at things clinically and detached. They need to get rid of the jurors who cry.

Benny starts the jury selection. It is a lot harder than they expected. They are getting rid of jurors left and right. One woman, in particular, doesn’t seem right to Bull. Marissa pleads with him. He goes against her. The judge fills the rest of the jury pool. Benny is angry, leaving Bull in the courtroom.

Benny and Bull meet the next day in an empty courtroom. Bull has been waiting for an apology, but Benny isn’t giving one. He is angry that Bull isn’t treating them like a team anymore. He is calling the shots and they are shots none of them are comfortable with. They don’t want to see a man be put to death because of them.

Marissa meets with a therapist. Meanwhile, Chuck meets with Elliott’s girlfriend. She isn’t doing well. Elliott is all over the papers, the neighbors are staring at her funny. She wants to testify but she is unsure and scared. They don’t have the best relationship. She is a waitress and he is in construction. She’s with him for the money. Chuck tells her he will be in touch.

In court, a witness from the couple’s neighborhood points to Elliott and says she saw him coming out the burning house. Benny gets up and asks when she picked the man’s identity out of a lineup. She went a week after the incident. Benny suggests that she had already seen his face in the news. The judge will not dismiss her testimony.

Bull and Benny meet with Elliott. Bull tells them that they have received an offer. They will take the death penalty off the table if he pleads guilty. Elliott doesn’t want to do that. They ask him for additional information about the man who sold him the car. He tells them he had a limp. Benny thinks this all sounds like a bad novel.

Bull goes to his ex-wife’s house. She lets him in. He congratulates her on her engagement. He is happy for her but sad for himself. She tells him he isn’t good alone. She hopes he meets someone. He does too.

Back in court, the prosecution calls Elliott’s girlfriend to the stand. Bull and Benny cannot believe their eyes. She tries to change her mind about what time she said Elliott came home. When Benny presses her, she crumbles and admits the prosecution offered her security for the harassment she was receiving. Benny calls for a mistrial but is denied. Court wraps for the day and Bull cannot hold out anymore. He needs a drink.