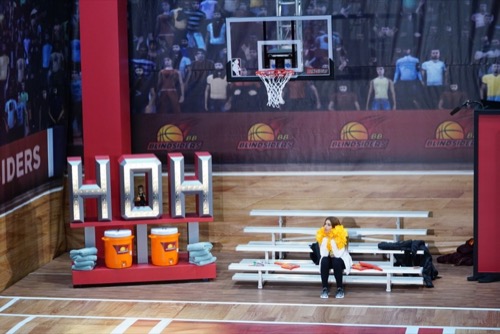 Tonight’s episode picks up where we left off on Friday with the houseguests competing for the HoH.  The HoH competition is an endurance one so the celebs are finding it tough.  Don’t forget the first 3 celebs who drop will be on slop.  Ariadna is rooting everyone on.  Marissa says as long as Omarosa doesn’t win she is okay.

The game just got a bit more difficult when popcorn gets shot on the celebs. Metta World Peace is finding it very difficult he is slipping and his arms cannot hold up.  Matta falls first.

Next t-shirts start slamming into the remaining celebs.  Ross says he is hurting, his shoulder is coming out of the socket and it is clear to him he is not winning.  Ross falls off.  Ross hopes Omarosa does not win.

Ariadna tells Ross that Brandi did not vote for Shannon, he is surprised.

Mark is in a lot of pain, his elbow is hurting, his butt is numb and his lower extremities are sore.  More popcorn rains down on the celebs.  Mark hits the floor and he is out.

Marissa is the next celeb to fall and she is glad she avoided slop.

We are down to Omarosa, Brandi, and James.  Omarosa says she is hurting but determined to stay on until the end.  Brandi cannot hold on anymore and she goes down. Now it is down to James and Omarosa.

Omarosa is the new HoH and she says she is going to shake the house up.  James thinks it is time for him to realign and he thinks he will do it with Omarosa.

Mark is not pleased he is eating Slop he says it tastes like baby barf.  Ross says he is fine with the slop he wants the full Big Brother experience.  Ross is not happy with Omarosa being HoH.

Meanwhile, Omarosa wants to shake up the house make big moves and start breaking up the pairs.

Ariadna tells Marissa that Brandi voted for Mark and Shannon. Ross suspects she did not vote for Shannon to get her vote.  Ross does not think it is good gameplay.

Brandi tells her alliance she voted for Mark and not Shannon so that Shannon would not feel bad.  Brandi says it was a last minute decision to make Shannon feel better.  Shannon says sometimes it is nice to be a little kind.  Ariadna thinks what Brandi did really damage the alliance.

Marissa tells Ross and Ariadna that they have to talk.  Brandi walks in and asks what is going on.  They tell her they are upset she changed her vote.  Brandi apologizes, she leaves the room upset.  Ariadna says she loves Brandi but she made a bad decision.  Ross says although they are upset with Brandi it is a numbers game and they have to keep the team of 4 together.  The three go to see Brandi and tell her they love her, Brandi is upset she cannot believe how they all reacted.

Omarosa asks Ariadna who was the person who did not vote for Shannon and Ariadna says she does not know.  Omarosa goes to see everyone and Brandi tells Omarosa she was the one.  Omarosa is shocked because the house agreed in solidarity.  Omarosa asks her, “Brandi what the heck.”  Omarosa wants to spin the info to her advantage.

Omarosa calls everyone to the living room there is an announcement.  Omarosa opens the envelope and it says, “The game is about to be shaken up, America is voting to twist up the next PoV.  You will find out prior to Monday’s PoV. Be prepared for anything.”  Ross is hoping that the twist will help him, Marissa, too!

Omarosa’s goal was to nominated Ross but she is upset because the new twist might mess up her game.  Mark comes in to talk to Omarosa.  Omarosa tells Mark she has no alliance and if she did not win HoH she would be on the block.  Omarosa tells Mark is her target.  Mark tells Omarosa she has never plotted against her.  Omarosa and Mark make a deal if he does not put her on the block next week and not backdoor her if he wins HoH she will not nominate him.

Omarosa goes to Metta and tells him she wants Ross out.  Metta agrees to vote with her.  Omarosa goes to see James and asks him what he needs to help her get Ross out.  Omarosa tells James her ideal 4 are James, Metta, Her and Mark.  James thinks it is a brilliant idea.

The nominees are: Ross & Brandi

Omarosa tells Ross she nominated him because he nominated her and he went around the house planting seeds of doubt.  She tells Brandi she voted her because of her decision not to vote Shannon with the house.

Brandi says Omarosa is a biatchy and a liar.  Ross says Omarosa made people not trust her because of how she behaved on TV the past few years.

Omarosa is thrilled how things went.

AMERICA’S VOTE – You can shake up Big Brother game by twisting up the next power of veto.  Do you want the next PoV to be the diamond veto or the VIP veto or the Spotlight veto?  Go to CBS to vote!