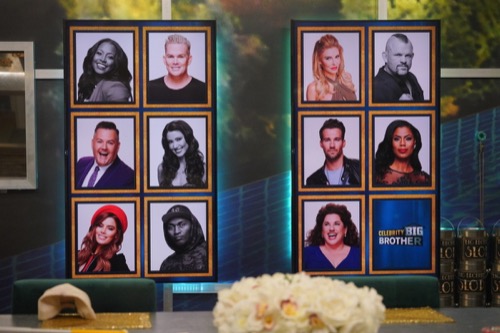 Seven celebrities are left in the house, but only three days are left in the game – it’s time for a double eviction. Mark voted for Ariadna and Brandi for eviction but Brandi is his target.

Meanwhile, Brandi thinks she is on the block because James has it in for her. The two nominees are hoping to win Veto. Omarosa is thrilled, as long as she is not the target. Brandi is questioning her alliance with Ross and Marissa because it doesn’t make sense that she and Ariadna were nominated if they are indeed a final four.

Brandi thinks Ross is playing two sides. James tells Ariadna that she is going nowhere, Brandi is the target and if she wins the Veto, Omarosa will be put up as a replacement nominee.

Time to pick players for the Veto competition, only six players will play. The nominees, the HoH and three other players, who are Omarosa, James, and Marissa. Ross is thrilled that his name didn’t come out of the Veto box.

Julie informs the houseguests that tonight it is double eviction night. The houseguests are all sitting outside and Brandi dares Ross to say something bad about Julie. Ross is shocked, he says he has nothing bad to say and walks away.

Brandi goes on to say that if she could put two people on the block, she would put James and Omarosa – then she tells James that he wouldn’t vote her out because she saved him twice.

James loses it and tells Brandi that she always rude and even though she apologized once, he is excited to see her go home because she is rude.

Back in the house, Mark commends James for handling Brandi with class. Marissa is alone outside with Brandi who accuses her of talking shit about her with Mark and James, but it wasn’t true. Now it looks like Brandi pretty much sealed her fate about going home if she doesn’t win the Veto.

Time for the Veto competition where houseguests will be brought to a secret location. Omarosa is first, on go she hits her button and reveal a life-size action figure, label them with the three houseguests that she thinks makes up the eyes, nose, and mouth of the action figure. If incorrect, she has to figure out which one is wrong.

There are four action figures and the houseguest who completes the task in the shortest amount of time will win the PoV. Omarosa really doesn’t want to win Veto, she is throwing the competition. Ross is not playing, he gets to watch everyone compete.

Omarosa is done, she is alone with Ross and asks him right out if he wants to be in the final two with her. Ariadna is next, she beats out Omarosa by completing the task in less than 10 minutes. James can’t beat Ariadna, neither can Marissa. Mark didn’t even complete one action figure and neither does Brandi. Ariadna wins the PoV.

Time for the Veto meeting, Ariadna uses the PoV on herself which leaves Mark with having to name a replacement nominee, he chooses Marissa.

Marissa is clearly upset that she was nominated, Ross looks like he is going to cry. James is so excited and declares that his best day is going to be when Brandi goes home.

Brandi tells Julie that she is not surprised that she was voted out, but she is surprised that Ross stabbed her in the back. Julie asks Brandi what it was that got under her skin with James, she says that he was arrogant and cocky which was so annoying to her. Brandi admits that it was her mouth that got her thrown out of the house. Julie asks what is more cutthroat, Big Brother or Real Housewives of Beverly Hills, Brandi says Big Brother.

Time to begin tonight’s HoH competition, the power is up for grabs. The houseguests are in separate rooms for this game called BB Auction. Julie will ask the houseguests various questions about the BB art they memorized on the memory wall, the answer will be true or false.

The houseguest with the most points after seven questions will be the new HoH. It goes down to a tiebreaker between James and Omarosa and it is a number question, the person who comes closest to the number will win.

Omarosa comes closest, she wins the HoH and only has a few minutes to strategize.

Omarosa has to make her two nominations, Ross and Marissa. All six houseguests will participate in the PoV competition. In front of the memory, wall is six paintings, each painting has a replica located in one of six designated rooms. However, one of the replicas is not an exact match. Their goal is to identify which set of paintings are not an exact match. If they answer incorrectly, they will be eliminated. Ross wins the PoV.

Time for the PoV meeting and it is no surprise that he uses on himself. Omarosa has to name a replacement nominee, she chooses James.

Time for the live eviction, Ariadna votes for James, Mark votes for Marisa, Ross must choose a side – he votes for James. James will leave the Big Brother house. James is surprised, he thought Ariadna would have been the one to be put on the block and sent home. Julie asks James where he went wrong, he says when he didn’t align with Omarosa and he didn’t because he thought she would be going home before him.

James says he thinks the reason why Brandi didn’t like him is that she had a crush on him. James’ final thoughts, at least he beat Brandi.

The final five will head to finale night and everyone except Omarosa will play in the next HoH competition, the new HoH will nominate two people for eviction and then everyone will battle for the final PoV. One houseguest will be evicted and the final four will battle out to be the final HoH and have the power to evict two houseguests. In doing so, that person is choosing who they want to sit beside when the jury decides who is the winner.