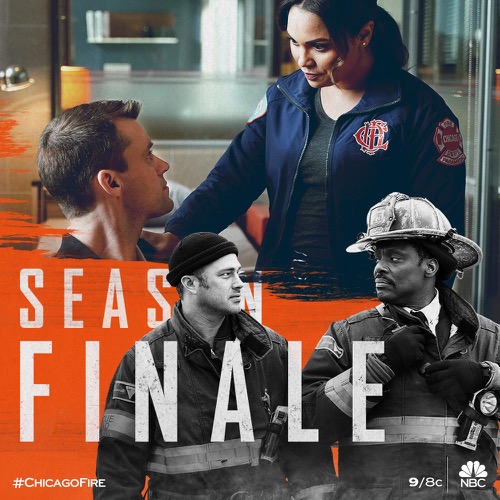 Tonight on NBC Chicago Fire returns with an all new Thursday, May `0, 2018, season 6 episode 22 and 23 finale called, “One for the Ages – The Grand Gesture” and we have your Chicago Fire weekly recap below. On tonight’s Chicago Fire episode as per the NBC synopsis, “In the Season 6 finale, Boden takes a big step in the pursuit of a major career decision. Kidd becomes increasingly distrustful of Renee’s motives with Severide. Herrmann has trouble bouncing back after a tragedy. Also: Boden’s chances for a promotion are met with potential complications, leading him to take matters into his own hands. Dawson and Casey don’t agree on an important decision, while Kidd finds herself struggling to find time with Severide. Brett and Dawson respond to a tough call.”

Tonight’s Chicago Fire season 6 finale looks like it is going to be great and you won’t want to miss it.   While you’re waiting for our recap make sure to check out all our Chicago Fire recaps, news, spoilers & more, right here!

Boden is putting himself up for commissioner and so is Grissom. Otis asks Joe if he got any sleep the night before because he kept pacing around, Joe assures him that everything is ok. A call comes in, there is a fallen tree and a little boy has been hurt. Herrmann runs to the boy and everyone else helps to lift the trees and get the boy out from underneath them. Kidd tries to get some time with Severide when Renee, an old friend of Severide. Renee and Severide talk about the oil refineries, she then invites him to her house the following evening to talk more; Severide says ok. The guys are talking about Boden’s chances of becoming commissioner, Mouch thinks he has a real shot. Herrmann is more interested in the child who was buried under the trees, Brett tells him that the kid is lucky but should be back on his scooter soon. Brett then tells everyone that the good samaritan they met on the call, his name is Glen and he is an equipment buyer for the Indianapolis Fire Department; she told him about the slam again and he is interested. Joe is excited, Herrmann tells him to do it right and not blow it.

Kidd notices Severide speaking to Renee and she is getting a little touchy with him, then he tells her to text him her address so he can go to her place later as they discussed.

Grissom goes to see Severide and blasts him for nominating Boden for commissioner, tells him it is a stab in the back.

Severide tells Casey and Boden what Grissom said, Boden tells him to keep his head down and fix his relationship to Grissom.

Joe demonstrates the slam again to Glenn who loves the product.

Severide received messages from his dad about what happened with Grissom. Kidd tells him that Boden is better for the job and he knows it. Kidd asks him to go out for the evening, he says later because he has to go see Renee and you can see that it bothers Kidd.

Dawson did a pregnancy test, it is negative and both she and Casey are disappointed. Casey says he is going to take her out to dinner.

Severide is at Renee’s house, he gets to meet her son who takes a liking to him right away. Renee seems really happy and tells Severide that her son is usually not that affectionate with people. Renee tells him that she is very sorry, she wasn’t in her right might the way she acted with him and it was unforgivable.

Kidd opens up to Herrmann and tells him she doesn’t like the whole thing with Severide and Renee.

Dawson confides in Brett that the waiting to get pregnant is hard. Glenn meets Brett at the bar, Joe sits down as well and he tells them that they can purchase 73 to start; Joe says ok, give him time to speak to his partners about the cost per unit. Brett gets up to get drinks and Glenn asks Joe if she has a boyfriend.

Boden speaks to Dale who tells him that he doesn’t have to sell him on the job, the mayor knows who he is, they have to dig into his personal life to make sure there nothing that can embarrass the mayor because he is on the shortlist.

Severide bumps into the commissioner, he wants to know who he would pick between Grissom and Boden if he was in his shoes.

Joe runs the numbers with Mouch and Brett and doesn’t look excited, he says that Glenn looks a little sketchy and is not sure if he will come through.

At the station Renee’s son is there and jumps right into Severide’s arms, Kidd sees it and doesn’t look happy. Kidd goes to speak to Renee and tells her that whatever she is up to, she better not mess with Severide.

Dawson tells Casey that Brett has this great fertility doctor, he is not happy about it but says maybe a checkup with a doctor might not be a bad idea.

Commissioner Staten endorses Boden for commissioner and he couldn’t be happier.

Glenn brings Brett a gift, root beer from home in Indiana. Glenn then asks Joe about the numbers and he says the best he can do is $275 per unit. Glenn says that it is really high and there is no wiggle room with a price. Glenn walks away from the deal, he says he will never get that price, Brett is shocked, she knows they could have sold it for $240.

There is a call, they head to the water and there is a boat, a guy is stuck in a tube. Boden has the guy by his feet, the rest of his body is stuck in the tube. Severide cuts the tube and they get him out. Grissom congratulates Boden for Staten’s endorsement.

Otis tries to encourage Joe to tell Brett about his feelings for her when she walks in and tells him that Glenn is willing to go to $260; Joe says to go ahead.

Severide and Dawson are at the doctor’s office, she has an aneurysm and getting pregnant can be fatal for her.

Boden is at the bar, a news reporter wants to ask him a question; is there any truth to the fact that he recently received a large cash kickback from a wealthy friend of commission Staten.

Renee shows up at the bar, she tells Severide, in front of Dawson, that her son is missing. At the police station, Ingles refuses to issue an amber alert. Renee gets a call, it is the babysitter, she has her son, they are ok. When Severide tells Dawson, she tells him that Renee overreacted.

Dawson tells Casey that she wants to continue to try and have a baby, there is just a 10% risk that something can go wrong, there is a 90% chance that they can have a child and this is their time.

At the station, there is a call for a construction fire. On-site, there is a broken gas mane and there are two men trapped in an area that is surrounded by fire. They save the two guys and Severide who goes down to get them.

Renee shows up the station and interrupts Severide and Kidd talking, she tells him that there is important information about the case and she needs to speak to him.

Huffhines comes from the commissioner’s office and tells Boden that he made a statement that when he heard about the payment, he insisted the money be returned. Boden is furious and walks out. Meanwhile, Chief Hatcher asks her if she will volunteer to go to Puerto Rico for relief efforts there; she says it is not a good time and she has too much going on now.

Boden goes to see Grissom and tells him he know he leaked that Boden took the money and he also knows he did the right thing. Grissom tells him to get out, Boden says he has no integrity and no character.

Huffhines tells Boden that the reporters are officially dropping the story but unfortunately the commission can no longer endorse him. Huffhines still thinks Boden has a better chance than Grissom because he has rubbed fewer people the wrong way.

Casey tells Dawson that he would like to adopt rather than risking her health.

A call comes in for an ambulance, Brett and Dawson head out to an apartment where there is a man with a head wound. Dawson goes back to the truck to get some supplies, the man tells Brett that his neighbor is messed up, pointing to another room in the apartment. Brett follows him to find a woman with a knife in her chest. The woman keeps trying to tell Brett about her girls when she dies in front of Brett. Dawson comes running back in the room announcing that cops are on the way and finds Brett sitting on the floor.

Joe is worried about Brett, he doesn’t know, but she is all alone and crying after watching the woman died earlier in the day.

Severide is at court, Renee is there and she introduces him to two men that were injured in the fire.

Casey walks in to see Dawson and she found a pamphlet from Caring Hill, an adoption agency that he went to look into on his own. Dawson wants to know why he thinks he could have gone to see them without her. Dawson is clear, she is not adopting and wants her own baby. A call comes in, there is a bicycle accident, Dawson heads out with Brett. Dawson asks Brett for gauze and a sling she hands her scissors when Dawson asks again, Brett walks away.

In court, Renee questions Severide. The testimony went very well, there was an offer made and the victim’s are thrilled, Renee thanks Severide and then kisses him on the mouth.

Back at the station, Brett is upset with Dawson, she tells her the way she spoke to her in front of the victim was disrespectful. Joe finds Brett alone and upset, he tells her he is there for her; Brett tells him that his friendship means the world to her, he hugs her and comforts her.

Otis verifies the numbers on his progress reports and finds out that Grissom adjusted his numbers to look good in front of the mayor; he goes and tells Boden.

Dawson is at home, Casey walks in and says he doesn’t want to risk losing her to have a baby, she tells him that it is her risk, not his. Casey tells her that either they are in it together, make a unified decision, or they are not it together. Casey is upset, Dawson goes for a walk.

Kidd is with Severide, he tells her the case is over and he told Renee congratulations and there is no reason for them to see each other again. She falls into his arms and tells him she misses him.

The mayor just appointed the new commissioner, it is Grissom.

Dawson goes to see chief Hatcher and asks him to give her more information on Puerto Rico.