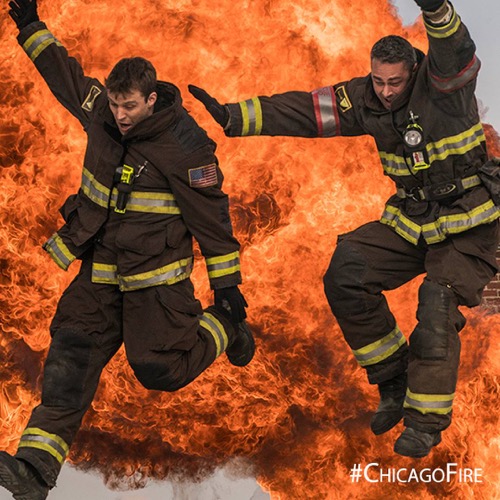 Tonight on NBC Chicago Fire returns with an all new Wednesday, September 26, 2018, season 7 episode 1 premiere called, “A Closer Eye” and we have your Chicago Fire weekly recap below. On tonight’s Chicago Fire premiere as per the NBC synopsis, “In the Season 7 premiere, Casey tries to deal with his unsettled personal life and the firehouse welcomes a new member. Boden, meanwhile, clashes with new Assistant Deputy Commissioner Jerry Gorsch.”

Tonight’s Chicago Fire season 7 premiere looks like it is going to be great and you won’t want to miss it.   While you’re waiting for our recap make sure to check out all our Chicago Fire recaps, news, spoilers & more, right here!

Casey is thinking back to a conversation he had with Dawson about adopting, he is alone in his apartment.

Severide and Kidd are finally together and happy.

At the station, Brett is thinking about the conversation she had with Dawson about her not having respect for her and not wanting to ride with her on 61 if she was going to act that way.

Boden is thinking about the fallout after losing to Grissom for the Commissioner job.

Severide and Kidd see Casey arrive at the station. Boden confronts Brett about the fact that she has been having problems partnering up with someone and until Dawson returns she will partner up with Foster.

Boden tells everyone that they have a new paramedic, Emily Foster that is starting – she runs in late just as he is announcing her arrival.

Casey and the man are saved just in time. Once, everyone, is safe Severide says to Casey that he doesn’t mean to step on his captainness, but how about not throwing himself into harm’s way next time before they get a clear.

Foster and Brett are getting to know each other. Gerry walks up to Boden who congratulates him on his promotion to Assistant Deputy Commission. Gerry says that Grissom told him to keep an eye on things here at the station and hopes Boden doesn’t mind. Boden acts cool but he wishes it was anybody but Gerry.

Severide goes to see Casey and asks about Dawson. Casey admits they are drifting apart, Casey tells him to step up his game if he wants to make this long distance relationship work. Casey calls Dawson and they do some face time together.

Boden sits down with Casey and tells him they are going to batten down the hatches when Gerry walks in and tells them that he wants the doors open from now on.

Brett asks Casey about Dawson when she is coming back. Casey says he doesn’t know.

The squad heads out to fill up the rig when there is an accident on a construction site, a man who is using a jackhammer hits a power line and is on fire, Severide jumps on him to put out the fire.

Otis gets back to the station and tells Gerry what Severide did, tells him It was a great save. Gerry confronts Severide and says that he ignored his training, jumped on the victim with an active power line. Severide says he does what he does to save a life.

Boden goes to see Otis and asks him to go over the report on Grissom.

Brett can’t sleep, she sees that Casey is up to and pacing in his office.

Foster asks Brett if she would like to go out with her for a fun night, she says no.

Boden is fishing with Severide and Casey. Boden shares how he knows Gerry from way back, they never liked each other. Severide says that it is just like Grissom to find Boden’s Achilles heal and turn it against him. Casey catches a fish and they all cheer.

Otis bumps into Ramirez at the bar and tells him that he got him on the chess game. Ramirez says he transferred out, he is not playing chess, Otis wonders who is playing with. Boden walks in, Otis gives him the report on Grissom.

Boden turns in the report, it will be taken to the mayor.

There is a call, a man was hit in the head with a brick; Brett and Foster are on the scene. The man has an ankle monitor and doesn’t want to be moved. Brett and Foster tell the police that if he doesn’t go to the hospital he will lose his eye. Foster wants to perform a procedure to help save the eye, Brett tells her that she is not trained for that, she does it anyway and it is successful. At the hospital, the man is going to be fine. Foster walks away and a doctor approaches Brett and asks if that was Emily Foster, she says yes and he says, “oh how the mighty have fallen.”

Otis finds who his chess player is, Kidd.

Gerry approaches Boden and tells him look like he has been busy as he slams the report that Otis went over, on the table. Gerry tells him that the mayor’s office knows about the clerical error, furthermore, Grissom and the mayor are getting closer as they share the same vision. Gerry tells Boden to keep an office open for him, he plans to spend more time in the station permanently.

Casey is home and is surprised to see Dawson back, he tells her that her bags look more like leaving bags than staying bags. She goes on to tell him that it is a permanent mission, she has been asked to lead it. She tells him to go with her, he says he is a Chicago guy and she knows that. She says sorry, he says that she was meant to do this and he is lucky to have walked alongside her as long as he did. The two say goodbye and hug.