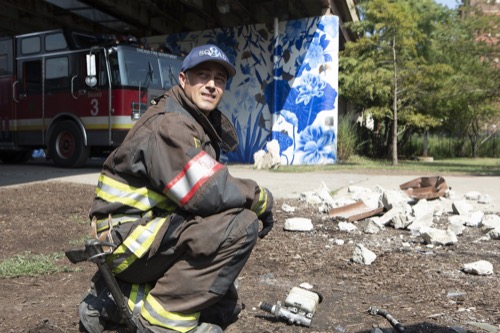 Tonight on NBC Chicago Fire returns with an all new Wednesday, September 26, 2018, season 7 episode 3 called, “Thirty Percent Sleight of Hand” and we have your Chicago Fire weekly recap below. On tonight’s Chicago Fire premiere as per the NBC synopsis, “Chief Boden becomes increasingly skeptical of Assistant Deputy Commissioner Gorsch’s motives, while Severide gets wrapped up in a difficult situation following the rescue of a child from a car wreck. Trying to fit in with the rest of the firehouse, Foster is tasked with doling out some personal advice to Cruz.”

Tonight’s Chicago Fire season 7 episode 2 looks like it is going to be great and you won’t want to miss it.   While you’re waiting for our recap make sure to check out all our Chicago Fire recaps, news, spoilers & more, right here!

Chicago Fire begins tonight with Stella Kidd (Miranda Rae Mayo) ready to go to work, as Kelly Severide (Taylor Kinney) picks her up, saying she is “breath taking!” Christopher Herrmann (David Eigenberg) talks to Chief Wallace Boden (Eamonn Walker) about how the house’s morale is down because they have to whisper in their own house.

Lieutenant wants to talk to Boden about the schedule as he is down as commanding officer for Engine 51 through the end of next month, his retirement. Boden feels its a loss for the whole house, but understands the motivation.

Randall “Mouch” McHolland (Christian Stolte) is selling raffle tickets for the annual ticket. Everyone is thrilled to see Stella back, but Matt Casey (Jesse Spencer) says Chief wants her in the bull pen for the first shift back; Severide is surprised. Chief chose to hold back to keep the peace with Jerry Gorsch (Steve Boyer).

The crews are called out to a car on fire that appears to have fallen off an overpass. The father is able to say the name Mason, but that is his son’s name. Matt yells there could be a child in the car. Joe Cruz (Joe Minoso) finds the young boy inside, after they extinguish the flames. Severide is able to work with the truck but his legs are impaled, they cannot cut anything and take him and his dad in the same ambulance to Med.

Stella brings paperwork to Boden, who is sorry she is sidelined. She admits she was a little more shook than expected. They are discussing a new Engineer for Truck 51, but Gorsch comes in, saying he couldn’t help overhearing and suggests who could be a replacement; Boden tells him they have it covered, thanking him for the recommendation and he will consider it. Stella dismisses herself as Gorsch says the old norms dictates he has the final call but he can consider this a favor to him. He promises Boden won’t be disappointed with this decision.

At the hospital, Severide and Emily Foster (Annie Ilonzeh) work on removing the metal out of his leg. Severide praises her as Sylvie Brett (Kara Killmer) reminds him of what her name really is. mason’s mother rushes in as they informs her that her husband drove off an overpass. She begs them to call the police as she believes her husband just tried to kill their son.

CPD arrives and she files a report, telling them to call her lawyer, Sean Morland (Will Allan) to verify everything she is saying about Mark Wittaker (Chris Payne Gilbert). Sylvie confirms that Mark kept saying, “What did I do?” when they were treating him and from his condition it was clear he wasn’t wearing a seat belt. CPD, says they will look into it, but there is no hard evidence of a crime and for now her son is safe; Severide doesn’t like the response.

Boden barges angrily into Matt’s office, telling him about Troy Jennings and how his name was brought up from ADC Gorsch. He wants to know why Gorsch is bringing him up; Matt says he will look into it.

Severide wants an incident report from everyone that was there, explaining to Kidd it was a possible attempted murder suicide situation and he could use her help later. Meanwhile, Chloe (Kristen Gutoskie) arrives at the station with sweets, thanking Joe for saving her life. Brian “Otis” Zvonecek (Yuri Sardarov) can’t believe that Joe can’t see this woman is in to him.

The alarms sound and everyone is off to another call. When they walk in, they find a man inside a sarcophagus. He is in a straight jacket and fireworks are going off. Otis pries it open and once they release him, be demands them all to sign a NDA.

Outside, Otis wants to know what it is, but all he will tell Otis is that it is magic. Emily says she will tell him some stories, and if she buys him a drink, she will tell him how her ex was a magician and how he made a relationship disappear. While they are loading up, Truck 111 arrives on scene with Troy Jennings, who reveals he is in the short running for commanding officer for 51. Mouch reveals he is the brother-in-law of Gorsch, and it all clicks for Matt.

Severide reviews the photos of the accident involving Mark Whittaker, when Stella joins him. He shows her that if Mark really wanted to kill himself, he would have done it differently. Stella reminds him that he did his part by saving Mason.

Matt informs Boden that Gorsch and Jennings are related. Boden tells him to keep a firm lid on the situation on this because if he is going all “knives” on Gorsch, he needs to be fully prepared. Emily is enjoying the cake pops as Joe wants to know if a cute girl came by the house to see him or the entire house. He needs a female perspective but he can’t asks Brett because they have a past; something Emily didn’t know. Emily suggests the real question is whether he is interested and he admits he is.

Mouch sells tickets to Engine 37, everyone is going except for the candidate, which Mouch doesn’t feel comfortable. Mrs. Wittake’s lawyer, Sean Morland walks into the station and sits down wanting to question Severide about Mark not helping Mason, or vehicular suicide. Severide isn’t willing to help destroy a family. He turns off the recording device, saying they are talking about a family and they are done!

Herrmann comes to see Boden, closing the door and asks whether Jennings is coming over. If Boden doesn’t play ball with Gorsch, what happens with the rest of them. He likes Jennings and is good with the rest of his crew. Boden refuses to allow Gorsch run his firehouse. Herrmann tells him that this is his pride talking, and he needs to make the best choice for the house, long term and if that means hiring a good solid lieutenant to keep the peace; that is fine, who cares where this guy came from. Christopher reminds him that he is saying that with love.

Joe arrives at the building where Chloe said she worked. Everyone in her work place is staring at them, and he invites her to the fire department picnic and she immediately accepts.

Mouch goes to see the candidate, who is a floater now after he got a really bad review. Mouch reassures him that he will be assigned soon. He hands him a ticket, saying there are some people he wants him to meet, people who picked him up when he fell and he won’t take a “maybe.”

Severide and Stella come to Chicago Med, but stop outside Mason’s room where Mark greets them, thanking them, saying he would never hurt his boy. He feels it matters that they know he would never hurt his boy. He says Mason shrieked, he looked at him, saw a shape in the road and when he swerved they went off the road. There are no criminal charges but family court is different; Mason wakes up and calls for his dad, he gives Mason the toy, Severide and Stella bought him. Stella and Severide decide to skip dinner and want to investigate the accident site.

Severide talks to Stella about how this affects a child, when parents go at each other like this and if he can help Mason, he wants to. She agrees with him, as they walk with their flashlights, Severide stumbles upon a deer, just like Mark said.

Severide returns to the hospital and meets with Mrs. Whittaker in the lounge; she reveals Mason is being released later today. She is hopeful about getting sole custody. He sits down revealing he found something that will make a difference for her and went back to the scene, finding it weird that Mark would insist he saw a deer and he went back to the scene. He shows her photos of the deer as she processes that it was truly an accident. Severide reminds her that Mason is lucky to have two parents that want the best for him.

The CFD picnic begins with barbeques and magicians. Boden and Gorsch talk, he says Jennings got the green light from the top for the commanding position and Boden promises the big announcement will be today. Mouch looks out for the candidate as others play with the bean bags.

Boden calls everyone forward for his speech as they bid farewell to Dedrickson and he has big shoes to fill. He is happy he didn’t have to look too far to fill them and is happy to announce that Christopher Herrmann will be taking over as Lieutenant on Engine 51; the entire house celebrates his promotion except Gorsch who Boden thanks for his suggestion but in the end he felt they needed someone who has experience in the house and someone he could trust. Gorsch excuses himself to brief the Commissioner.

Herrmann doesn’t know what to say, but Boden says its about time he got his shot and he promises to not let Boden down. The two man hug; Severide is waiting outside of Med waiting for April to come join him for the picnic, he witnesses Mark join his wife and son, mason who has been discharged from the hospital.