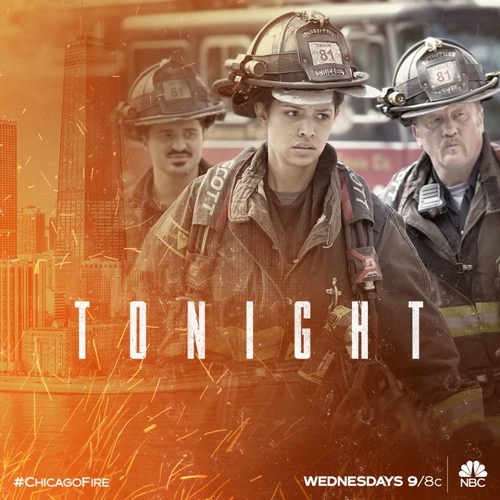 Tonight on NBC Chicago Fire returns with an all new Wednesday, October 24, 2018, season 7 episode 5 called, “A Volatile Mixture” and we have your Chicago Fire weekly recap below. On tonight’s Chicago Fire premiere as per the NBC synopsis, “Working alongside a journalist, Casey does some digging into the cause of a trailer park fire. Boden hits his breaking point while Mouch, Herrmann and Cruz work to figure out why Molly’s isn’t performing up to expectations.”

Tonight’s Chicago Fire season 7 episode 5 looks like it is going to be great and you won’t want to miss it.   While you’re waiting for our recap make sure to check out all our Chicago Fire recaps, news, spoilers & more, right here!

Chicago Fire begins tonight with Sylvie Brett (Kata Killmer) wondering why Stella Kidd (Miranda Rae Mayo) and Kelly Severide (Taylor Kinney) weren’t at Molly’s the night before; she admits they got into a fight over his friend Tyler. Christopher Herrmann (David Eigenberg) tells Kidd as his boss and landlord she better get her butt to work before she is jobless and homeless. Severide informs Chief Wallace Boden (Eamonn Walker) that airbags are missing, so he just tells them he will order more but they have to be more careful. Boden catches Jerry Gorsch (Steve Boyer) looking through his desk, asking why he wasn’t consulted when Lt. Herrmann bounced a member of 51? Boden says the only person who needs approval is the Commissioner’s office.

They all discuss why Molly’s has been bleeding money lately. Herrmann complains that Kidd is overpouring and Brain “Otis” Zvonecek (Yuri Sardarov) feels its something else as Emily Foster (Annie Ilonzeh) tells them to read all their reviews, and none of them are good. Suddenly they are all called out to a fire in a trailer park. Matt Casey (Jesse Spencer) knocks on one of the trailers, asking if there is anyone in there and one hand hits the window.

Herrmann tells Ritter to make a new door, as Severide uses a chain saw to cut in the opposite side. Joe Cruz (Joe Minoso) helps rip down the siding and Casey jumps in and pulls out the victim and rush her off to Chicago MED.

Back at the Firehouse, Otis says he plans on writing a review that will reduce them to tears. Gorsch comes out and finds Ritter’s bunker pants in the middle of the floor, he rushes back to get them and introduces himself to Gorsch. Herrmann says what is good enough for him is a smoke eater he can count on and if this victim survives it will be because of him. Gorsch says he wants Herrmann to write Ritter up for the pants.

Herrmann sits with Severide and Casey talking about Gorsch trying to get Boden to snap. If Herrmann keeps squaring off against Gorsch like that, it puts more pressure on Boden, and they all have to outlast Grissom too. Naomi Graham comes to see Matt Casey, wanting to know how the fire started in the trailer park, she informs him that innocent people are being killed and he may be the only person who can help. She shows him various stories and how the fires are happening in the kitchen, in the same make and model trailers made by Glanbrook.

Stella talks to Severide about sneaking out early to get some alone time. Matt tells Naomi he will call her as soon as he gets off shift, in hopes he can help her. Gorsch tells Matt to send her to the fire chief, but Boden wants to know her theory and tells Casey to go with it. He feels that Gorsch isn’t the real problem there, Grissom is and its time to see the Commissioner.

Otis says their reviewer is still a regular at Molly’s, and believes they can still sniff him out. Stella wants to know what they are going to do once they figure out who the person is. Emily wonders if she should have brought her date there the other night, she might have not ended up ghosted instead.

Boden goes to the CFD and learns he can’t see the Commissioner until at least after Thanksgiving, he says he will sit until there is a few moments to catch him.

Matt brings Naomi where the burnt trailer is supposed to be; before they get out of the truck he learns their victim died, but what’s more shocking is that there is virtually nothing remaining of the trailer. They quickly find out that there is no way it was a stove fire that did that damage as several people in the park hear an explosion. Matt goes to another person’s door who owns the same trailer and he begins to investigate, but when he wants to do an experiment; Naomi pulls out her check book offering him money for his fridge.

Chief Bode waits all day, learning the Commissioner is purposely avoiding him, even sneaking out the backdoor for dinner with the Mayor.

At Molly’s, Randall “Mouch” McHolland (Christian Stolte) along with all the other firefighters work with Herrmann in an attempt to find out who is the person giving Molly’ such a bad review. Ritter comes to the bar, as Brett wishes Foster would come, but is confused because she didn’t actually invite her to Molly’s. Severide talks to Boden, sharing “he’s coming for us!”

The next morning, Casey brings in the fridge as Severide tells him that Boden never got to talk to Grissom, didn’t even make it passed the lobby. Cruz is at the photocopier when Gorsch confronts Boden who asks him to close the door. Boden is fine with telling him that if Grissom wants him to park it there to catch them in a mistake, this is still Boden’s firehouse, but when he starts telling people what to do, he is disrupting the chain of command and putting lives on the line. Boden will not let that happen. Gorsch says things don’t need to be this difficult and suggests he relinquish his command at 51, step down and take an administration post with the new CFD task post and he will report directly to Gorsch. Boden tells him he has no cause to strip him of his command; but Gorsch reminds him of the review he wrote on him all those years ago. He isn’t keen on being a firefighter but he is great at getting the Commissioner what he wants!

Cruz tells everyone about Boden and Gorsch arguing in the office; Casey feels this is on him but Severide feels they need to get to Grissom and the only person who can get through to Grissom is his dad, Benny (Treat Williams).

Ambulance is called to O’Hare airport, where Security Guard (Tirf Alexius) brings them to a woman, who has something moving on her face. She is coming from St. Petersburg, Russia. They are taking her to the hospital, but the agent is coming with, so whatever it is is properly disposed of. Brett goes to confront the date that stood up Foster, and it turns out it was a female doctor, not the male.

Casey talks to Boden about the “dust up” and he tells him either he fights with everything he’s got or let’s him win. Matt doesn’t see how letting him win is the right thing. Stella reminds Severide that asking his dad for things doesn’t usually end well, but he feels he needs to do this. She tells Kelly that she loves him and he says it back, holding her hand before he goes.

Naomi sets up the camera as they try to recreate the conditions inside the trailer, and he was right. Naomi finally has her proof that it was a malfunction from the manufacturer.

Kelly arrives at Benny’s place, saying he needs to talk to him. Benny invites him in, but right away brings up the fact that Severide called him a scared old man and then didn’t speak to him for 6 months. He knows about all the friction between Grissom and Boden; Severide wants Benny to help Boden as he is the only one who has always had his back, the father he never had – harsh words for Benny to hear. He didn’t come to fight, only for his help. Benny doesn’t know if he can help but promises to think it over as Severide appreciates that.

Naomi reads her story to Matt at a diner, saying he is a great interview and that he actually cares about this. She just hopes this doesn’t cause trouble for his Chief, but he feels Boden only cares about saving lives. She proofs the draft and is done monopolizing his time, he grabs his jacket and offers anything if she needs it; they shake hands and leave.

At the bar, Jake orders a drink and they realize it was him who was writing the bad reviews. Herrmann tells him if he changes the review they will always make sure his seat is always there. Stella said Herrmma handled it really well but he slyly tells Otis to give him really short pours from now on. Brett apologizes to Foster for the gender mix up, but she says there is no point in limiting herself and it will be fun getting to know each other.

Gorsch wishes Boden a good night, but before he can leave the firehouse he tells Gorsch he is not accepting his offer. He will stay with his people and if that means he is coming for him – Bring it!! He has faced far worse than him, so, he says, “Let’s see what you got!”