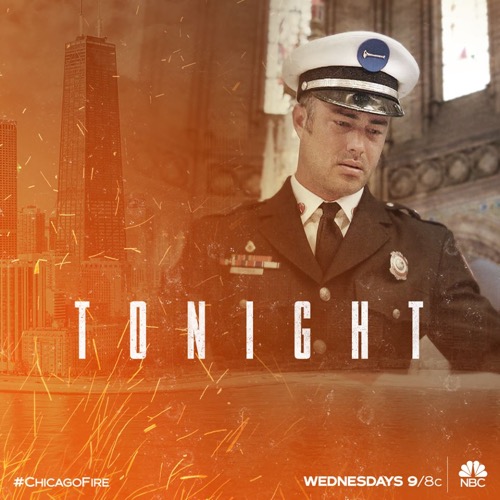 Tonight on NBC Chicago Fire returns with an all-new Wednesday, Novmber 07, 2018, season 7 episode 7 called, “What Will Define You” and we have your Chicago Fire weekly recap below. On tonight’s Chicago Fire premiere as per the NBC synopsis, “Severide faces some major adversity and Kidd is on a mission to help in any way she can. Following a car accident rescue involving a teenage girl and her young sister, a suspicious Brett has an unsettling feeling there is more to the story than what appears on the surface.”

Tonight’s Chicago Fire season 7 episode 7 looks like it is going to be great and you won’t want to miss it.   While you’re waiting for our recap make sure to check out all our Chicago Fire recaps, news, spoilers & more, right here!

Chicago Fire begins tonight with Kelly Severide (Taylor Kinney), his mom, Jennifer Sheridan (Kim Delaney) and Stella Kidd (Miranda Rae Mayo) packing up his father’s place after he passed away. Kelly is determined to find his dad’s bronze medal for distinguished service and Stella promises to help him find it, even if it means going to all his exes. Stella leaves for the shift but will check in later.

At the firehouse, Matt Casey (Jesse Spencer) says he will announce that the funeral is for Saturday; both concerned that Severide is taking on everything by himself; the guys agree to help Stella track down Benny Severide (Treat Williams) exes to see if they have any of his medals. Brian “Otis” Zvonecek (Turi Sardarov) asks Joe Cruz (Joe Minoso) if he’s heard if Katie is coming back for the funeral. The alarms go off and the ambulance is off with Chicago PD to a car accident.

Sylvie Brett (Kara Killmer) and Emily Foster (Annie Ilonzeh) arrive on the scene, where Brett calls for help needing them to extract the child from the back of the car; suddenly they find an elderly man lying on the ground as well and another ambulance is called. Cruz is able to get the back door open and Brett is able to confirm the young girl has no glass in her eyes. She is unwilling to give up the phone that is her sisters, which Cruz and Brett find weird.

At Chicago Med, Emily feels bad for the teen, thinking an accident like that would have her badly shaken up. The nurse is able to tell them their patient Mr. Torres is awake, with broken bones but will be okay; Brett wants to be alerted if something changes. Sylvie tells Emily that the little girl said her sister gave her the phone and told her to keep it, but it seems like she gave it to her after the crash. Sylvie thinks she might have been texting when she hit the man.

The firetruck makes a stop at Benny’s ex-number 4. Stella wants to know if Benny left anything behind, especially a medal since it is for the funeral. She doesn’t think she can make it to the funeral as too much negativity is bad for the blood. She suggests Matt come back later and they can look for it together; Randall “Mouch” McHolland (Christian Stolte) saves him by saying they have drills later. Emily thinks that Sylvie should write it in her report and let them figure the rest of it.

Chief Wallace Boden (Eamonn Walker) meets with Severide, where they go to talk to CFD about giving Benny a full honored funeral. They are told they can arrange an official call of the guard, attend of senior officers is something he will try to coordinate but a full-scale funeral is out of reach as those are reserved for the line of duty deaths; even though Benny served over 30 years in the department. Severide feels his dad deserves better than this and insists he has things to do when Boden tells him to come by the firehouse for lunch. Severide tells him he is fine and leaves. Stella continues her plan with the guys as to which ex they are going to see next.

Boden asks Brett for her report when several CFD seniors show up talking about Benny Severide. Boden tells them he is hoping they will all show up for Kelly Severide this weekend, asking them to hear him out; no parade but just a show of support, something with honors is what Severide needs. He reminds them he is only asking.

Stella, Matt, Mouch and Christopher Herrmann (David Eigenberg) visit another ex-named Beth, who kept a whole box of Benny’s stuff; she seems to be a little off balance. Stella reminds her they are doing this for Kelly and Beth tells her how Kelly was always good to her and offers her condolences to Kelly.

Sylvie returns to the hospital, inquiring about Mr. Torres; she learns that Mr. and Mrs. Ballard are there also keeping an eye on him and that their daughter Erica Ballard (Emma Fuhrmann) set up a funding page to pay for his medical bills. Her mother is overcome with emotions for Brett saving their daughters’ lives.

Kelly and his mother are at the funeral home, where Severide just wants to pay for everything, not wanting family photos or anything; his mom tries to hold his hand but he pulls away from her, telling the funeral director to just run the card.

Sylvie goes to see the Chaplain Kyle Sheffield (Teddy Sears), who is trying to prepare for Benny’s funeral. She tries to explain her situation, asking if it is wrong to lie by omission. He asks what her gut is telling her and advises her to take the time she needs to consider the facts, separate her fears and trust her heart as she can’t go wrong with that.

Otis talks to Cruz about how things ended off with Katie, as they never said goodbye. He doesn’t know what he’s going to say to Lily. Cruz isn’t paying attention at all as the football game is on. Otis shuts the game off and Cruz tells him that this doesn’t have to be a thing since it was four years ago with Katie, all he has to do is be himself.

All four arrive at Katie’s mom, April’s place and Mouch are positive that April is the one who has the medal. They learn that Katie is working in a restaurant now and April has her own business now, making frames and jewelry; she reveals that Benny was one of her initial investors and he probably did it because he wasn’t really in the picture when Katie was growing up. Stella asks her about the medal and she has a medal but its one with a fish in it, so it’s not the one they are looking for. Stella returns home completely defeated.

Jennifer shares with Stella how Benny had his entire funeral planned out, but Kelly is running himself ragged. Jennifer assures Stella she is doing more than enough for him and she is definitely good for her son and helping him find this medal means more than she will ever know.

Boden confronts Brett about having a sheet still open from yesterday; she says she needed some clarity and he orders her to close by today with no excuses. A call comes in an ambulance 61 is called out to a house where neighbors are arguing, throwing a rake at each other, it ends up embedded in Howard’s chest. Emily tells the neighbor Paul if he isn’t there to calm down then he needs to go.

At Firehouse 51, they talk about the angler medal Benny had as Stella continues to stress. She wonders if CFD would press a new one, but Matt says they would never allow it since they are one of a kind. Herrmann tells her she did what she could and Kelly will understand. Otis is under the rig fixing something when Katie arrives to visit the rest of them; they share a coffee and talk about how their lives are turning out pretty good. Everyone is happy to see Katie; thrilled to finally meet Stella. Katie hands Stella the medal she was looking for, hugging her so tight, saying her brother needs this so much right now.

Sylvie spots Erica walking in the hospital and decides to ask her if she was texting when the accident happened. She understands she might be afraid but the guilt won’t go away by hiding it. She needs to take responsibility now so she can start making amends as the person she hit deserves that and so does her sister.

Severide is on the phone, furious that the limo is not confirmed and decides to go with another company. He tells his mother it is one thing after another as she tells him to take a deep breath and asks him where all this anger is taking him. He denies being angry. She tells him that whatever Benny said to him at the end to get under his skin, it is gone as he is no longer there. Kelly reveals that he took a jab at Benny the last time he saw him and he ended up coming through anyway. She suggests this is the start of his life without his dad and how he lives it is what will define him.

Chaplain Sheffield greets everyone as they arrive at the church. Sylvie tells him their talk really helped him and the driver did come forward, thanking him for talking her through it. He hopes she will come by to talk again and not wait for a crisis. Inside the church, Severide apologizes to Stella who presents him with the medal; he kisses and thanks her.

The service is not very busy inside the church as Kelly talks about how his father was a legendary firefighter, joking because his father told him that all the time. He tells stories about Benny at work and as a father, stubborn and tough; battling people he loved as hard as he would any fight, but he also had their back whether they knew it or not, no matter the cost. He stumbles saying it took him too long to figure it out but he will never forget it. He places the medal on his father’s coffin and says, “Sleep tight Dad, you earned it!”

Outside the church, several firetrucks arrive and line the streets, raising ladders and flags in honor of his father. Dozens of firefighters line the streets as you hear, “Battalion Chief Benjamin Severide has returned to quarters!” and the bells ring over and over, “He is cleared from all his duties. He is gone but never forgotten. May he rest in peace with his brothers and sisters above!” Everyone salutes as the coffin is carried by and Kelly Severide finally sheds tears.