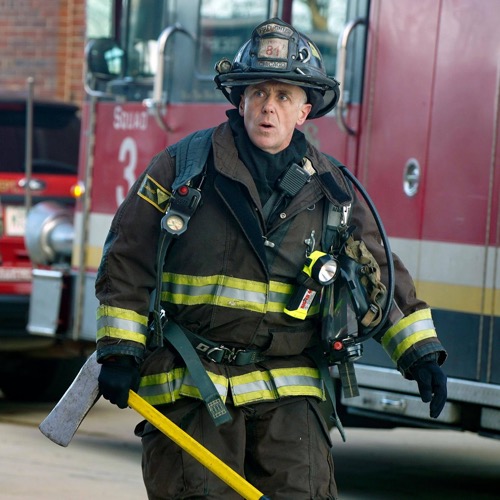 Tonight on NBC Chicago Fire returns with an all new Thursday, January 25, 2018, season 6 episode 11 called, “Law of the Jungle” and we have your Chicago Fire weekly recap below. On tonight’s Chicago Fire episode as per the NBC synopsis, “After responding to a time-sensitive rescue, Casey and Severide don’t see eye to eye on the best course of action. Herrmann struggles to entertain his daughter on “bring your child to work day.” Brett is joined by a surprise guest during a spa getaway, courtesy of Dawson, while Kidd’s social life gets a boost.”

Tonight’s Chicago Fire season 6 episode 11 looks like it is going to be great and you won’t want to miss it.   While you’re waiting for our recap make sure to check out all our Chicago Fire recaps, news, spoilers & more, right here!

Chicago Fire begins tonight with Lt. Kelly Severide (Taylor Kinney) giving Stella Kidd (Miranda Rae Mayo) her charger, that she forgot on the kitchen counter. She thanks him for bringing her to the charity event as he says he is sorry she blew off her date with Zach (Daniel di Tomasso); she says he understood.

Gabi Dawson (Monica Raymund) tells Sylvie Brett (Kara Killmer) that they dropped off the last of Bria’s (Quinn Cooke) stuff off, and says her dad looks 10-years younger after rehab, and now her and hubby, Captain Matt Casey (Jesse Spencer) are trying to find some time to reconnect using some spa passes they got as a wedding gift.

Christopher Herrmann (David Eigenberg) asks them if they have seen his daughter, Annabelle wandering around the firehouse, but she is inside Chief Wallace Boden’s (Eamonn Walker) office coloring. Herrmann rushes into his office, saying he forgot it was “bring your daughter to work day.” He informs Annabelle he doesn’t know how long she has to stay and leaves her with Connie (DuShon Monique Brown) as the crews are sent out on a call.

When they arrive on the scene, it is a Cohn County Sheriff Correctional Department van, with a prisoner in the back. Kelly Severide and Matt Casey work quickly to get the correctional officer out of the driver seat but the inmate in the back begins to kick the cage behind him and they worry he is going to snap his neck if he continues to kick his seat. Severide orders hi to stop kicking it; Casey manages to get the cage open from the back and the inmate jumps against the door knocking Matt over, Severide gives chase, holding him down until CPD arrives. Matt rushes to the front of the van and they have to do a quick extract instead, having no choice, Gabi and Sylvie find a pulse as Matt says they did what they could.

Back at Firehouse 51, Herrmann tells Captain Casey that he made the right call. Zach stops by to Stella, asking her if she wants to try again for another date tomorrow and go for a couple beers; she agrees.

Gabi comes to see Matt in his office, saying the latest was the Deputy was heading into surgery. Matt wants an honest answer from her, wanting to know if it would have made a difference if they made a “quick pull” from the start. She says it was tough to say, but her take any difference would have been marginal and it was the prisoner caused the damage, and he needs to remember they got him out alive.

Randall “Mouch” McHolland (Christian Stolte) and Brian “Otis” Zvonecek (Yuri Sardarov) walk into the dining area, and Mouch is upset, so Otis points out to Herrmann that the whole point of bringing his daughter to work is to show her around the firehouse. Mouch sits beside her and attempts to take the remote from her, saying maybe they can find something for everyone to watch but she won’t budge, and they are stuck watching kids’ shows.

Outside, Squad is training when Chief Grissom (Gary Cole) arrives, he talks to Severide about the call from this morning. He wants to know who decided to leave the driver in harm’s way; Severide says it was “united” decision. Grissom goes inside the firehouse and talks to Chief Boden and Captain Casey, saying he has they screwed up the rescue of a deputy and asks him to walk them through what happened. Grissom questions Casey if the Squad Lt agreed with him or not; Casey wants to know if Severide said something or not. Just then a call comes in and Chief Boden informs them that Deputy Keefe died 20 minutes ago.

Matt talks to Gabi, saying he would like to make an appearance at the vigil for the Deputy tomorrow. Severide walks by and he wants to talk to him in private. Matt is furious with Kelly feeling he told Grissom about their disagreement but Severide says he would never sell him out because that isn’t who he is.

Outside, Grissom tells Boden that he feels Captain Casey is buckling under the pressure and he could always put someone new in that position; Boden defends Matt and demands to know why Grissom is pitting Severide and Casey against each other. Grissom promises that if anything comes up about this he will let Boden know first and he would appreciate the same.

Otis is watching TV with Annabelle when Sgt Trudy Platt (Amy Morton) comes to see her husband, Mouch, informing him that she will be pulling some overtime and needs him to do some shopping. She says they are dealing with a triple homicide, Herrmann quickly rushes over and asks her not to mention homicide while his daughter is sitting there. Trudy walks over and changes the channel and tells Annabelle she is a police officer, Annabelle asks if she has a gun and Trudy says she has lots of stories.

Gabi gives her spa passes to Sylvie, saying they can’t use them as Matt has to go to the vigil. Sylvie asks Stella if she is interested in joining her tomorrow, but she says she has a date and tells her to ask her roomie, just as Joe Cruz (Joe Minoso) walks by; he immediately agrees.

Stella finds Severide on the roof, saying the thought of him brooding on the roof all alone was too sad to ignore. Suddenly a car pulls up and several men get out of a car demanding to know where all the firemen are; Stella and Severide want to know what the trouble is. He says his friend is dead. He said Keefe was counting on them and they let him down, so the next time they find themselves in a jam, and they want to call on them for help; they need to keep that in mind!

Boden, Matt, and Gabi go to see Trudy at the precinct, she says the county guys were just blowing off some steam. She can go put in a good word until things blow over. She tells Matt he only had a split second to make a decision and just to give them some time. Matt still wants to go to the vigil, and if there is trouble he will leave but he needs to pay his respects.

Cruz feels Sylvie was being genuine with her invitation, but Otis finds this is a little intimate, and if he ruins this; he will not be happy. Herrmann reveals to Stella and Mouch that his wife is not happy with him that he didn’t give Annabelle the real firehouse experience; they both agree that there was too much TV going on. Stella says his daughter is a smart little girl and one day she is going to throw him a curve ball.

Matt and Gabi show up at the vigil when Keefe’s friend who was drunk the night before tells them that he was a good guy and he made everyone around him want to be better. They say they are only there to pay their respects. He offers to introduce them to some of the guys.

Sylvie is ready to be pampered but Joe isn’t there yet. She asks for advice about not sending him the wrong message but suddenly Mouch appears in his robe and tells Sylvie that Joe couldn’t make it. Sylvie is mortified.

Stella and Zach are thoroughly enjoying dinner, but she can’t seem to stop talking about Severide. She asks to talk about something else, but as soon as Zach talks about something new but when he begins a new topic, she brings up Severide again, saying that he isn’t an issue and they aren’t romantically involved.

Kelly is at Molly’s when Grissom shows up. He tells Kelly that word is he is getting a commendation for tackling that prisoner; Kelly never heard of it and Grissom tells him to use it to his advantage. Severide tells him a Sheriff Deputy just died and his Captain is taking heat for it. Severide tells him to hell with his father and to hell with this. He got this job to save lives and to find someone else to do whatever he is doing because he isn’t this guy.

Trudy brings in Annabelle to Firehouse 51, she informs her dad that she has been signed up to be a junior police explorer. Trudy tells him to put his hands where they can see them. He gets a written warning, he gets a truancy warning, for not giving a proper warning for taking his daughter to work day.

Severide brings Stella her charger to work again. She appreciates him letting her stay at his place for the past few weeks, but she thinks its time to find a new place. Connie comes out and calls him to Chief Boden’s office; he informs him about the commendation but Severide says he would rather respectfully pass on it. Boden says he has never been in the job for the glory, but Severide says Grissom cooked up the commendation to try to motivate him up the chain of command.

There is a call and all the crews and Haz-Mat are called out. Matt orders everyone to get back as far as possible, and Gabi to get triage set up. Severide is to lead the charge as soon as Haz-Mat clear the area. Zach and Severide go inside as it is a maze and several victims are inside. They are running out of time if the gasses combine they will have an explosion twice the size as the previous one. Zach tries to shut off one of the valves, but it won’t budge and it blows off, sending Zach flying backward several feet. Severide calls “Mayday!” for Zach. Stella is busy working with Casey, they have maybe 3 minutes to get everyone. Boden orders all units to get out, but there are no signals getting in nor out; and its a maze.

Severide orders Cruz to take Zach out as he wants to go to the roof where the shut-off valve is. Stella gets the wounded woman out, Zach is being helped by Gabi and Sylvie and Casey rushes up the roof to help Severide. Together, Matt and Kelly are holding the valve hoping to hold it long enough to get everyone out of the building. He says if they survive he doesn’t know if Severide will get a reprimand or another commendation. Matt reveals he is the one who suggested the commendation, not Grissom. They look to see if they can run to the end of the building and jump into the water, and it explodes as they jump.