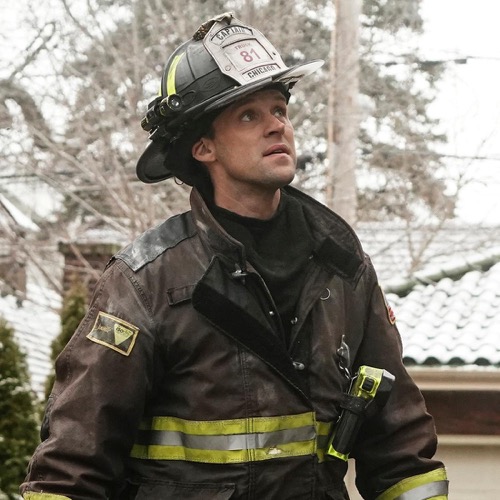 Tonight on NBC Chicago Fire returns with an all new Thursday, March 22, 2018, season 6 episode 14 and 15 called, “Looking for a Lifeline – The Chance to Forgive” and we have your Chicago Fire weekly recap below. On tonight’s Chicago Fire episode as per the NBC synopsis, “After responding to a car accident, Casey and Dawson become skeptical when a domineering husband answers for his injured wife. Later, in response to a call involving a residential fire, Otis and Kidd’s lives are put in jeopardy by gunfire inside the house.”

Tonight’s Chicago Fire season 6 episode 14 & 15 looks like it is going to be great and you won’t want to miss it.   While you’re waiting for our recap make sure to check out all our Chicago Fire recaps, news, spoilers & more, right here!

Sylvie woke up late, Antonio already headed out and didn’t wake her. Casey and Dawson respond to a car accident – the wife seems in shock, she won’t respond to any questions. The husband says her name is Holly and he is Scott. Scott sounds domineering when he tells his wife to tell them what happened. Holly says that a shopping cart was rolling by itself across the lot and about to bang into them, she turned the wheel and her foot got stuck.

When Scott is removed from the vehicle, Holly tries to say something but doesn’t and tells Dawson she can’t. Scott refuses treatment even though he could have internal injuries. Then Scott tries to convince his wife to refuse treatment – but he gets distracted and his wife is off to the hospital in an ambulance.

Cruz is frustrated with Herrmann and Mouch when he discovers they have contacted people regarding his “Slamigan” invention without his knowledge.

Dawson goes to see Chief Boden and tells him that he is very concerned about Holly because he witnessed questionable bruises on her body. Boden tells him to call Antonio, but after that, it’s a police matter. Holly’s head is fine, but the doctor is very worried about the bruises; Holly said she slipped in the bathroom. Scott has shown up at the hospital and he is taking Holly home – she confirms that she refuses treatment and the two leave the hospital.

Kidd uncovers something meaningful and important to Severide, its a special dedication letter from Springfield General Hospital.

Cruz is upset that the whole “Slamigan” is moving way too fast. Hermann tells him that it is his company, hands down. Cruz announces that Sylvie gets 10% of the company and it will come from Hermann’s share. Sylvie is super excited, but then she runs to the washroom and throws up.

Gabriella witness the whole thing and tells Sylvie she is probably pregnant, then she asks her if it is Antonio’s and Sylvie says yes. Matthew goes to check up on Holly, she opens her door and he tells her he knows what she is going through and there are places she can go, she tells him nobody can help her and closes the door.

Gabriella is with Sylvie, she is going to take her to buy a pregnancy test, Brit looks distraught and walks out of the pharmacy. Gabriella tells her knowing is better than not knowing.

Cruz needs help to cover his rent, he said he spent too much money on the prototype and Hermann is worried.

Scott shows up at the station and starts screaming and asks if one of them called the cops on him, he is really out of control and Kelly tells him to leave. Inside the station there are real concerns about Holly, she is desperate for help but it is hard to help someone when they don’t want the help. Antonio is with Sylvie, she starts to cry, but then there is a call to Holly’s house. When they arrive, the house is on fire.

They look everywhere in the house for Holly and finally find her sitting in a room with a bloodied baseball bat in her hand, she says there was no way out. They also find Scott and he is slumped on the floor with blood coming from his forehead. They come downstairs with Scott and Holly is crying. Everyone tries to protect Holly, they are sticking to the story that Scott hit his head on the bed post during the fire.

The guys get a fax with their first purchase order for the “Slamigan” and they are disappointed when they find out it is just for two units. Outside it begins to snow, Capp goes out side and finds his new chair on the roof, he shouts “not cool.”

Holly is a women’s shelter, Scott woke up and he is not pressing charges. Kelly and Stella are at the hospital for the dedication. On the way home, Kelly thanks Stella – she tells him anytime he needs support she is his girl, he says he knows. Stella then says she would love to stop at this diner for a milkshake, he says he can’t because he already made a commitment.

Gabriella goes over to see Sylvie, she called her and wants her there when she does the pregnancy test. Brit tells her that she is the one that told Antonio that are keeping it casual, but she thinks he would really make a good dad. Gabriella reminds her that she is thinking emotionally, Brit says that maybe this was meant to be. In the end, Kelly and Stella go for a milkshake. It turns out, Brit is not pregnant.

Kelly and Stella make plans to go to Milwaukee together. There is another call for a house fire. A guy runs out of the house, the pipes burst and his folks are still in the house. They find the father, is seems to be ok even though the house is engulfed in flames. All of a sudden shots are fired inside the house. Otis and Stella are upstairs where the shots are coming from. Stella tries to get up to check on Otis, but its hard because shots are still going off.

There is another victim, it appears to be the mother and she has gun shot wounds to the back. Otis has blood all around his head, he is on the floor. Stella calls over the radio and reports that Otis is hurt.

Kelly wants to run in and the chief stops him. The guy who originally came out of the house tells them that there is no shooter in the house, it is his weapons and ammo from his room that is going off. They finally get Otis out of the house and on his way to the hospital.

It’s touch and go with Otis, but he comes back – Cruz hops in the ambulance with him. Cruz is furious that the kid had so much ammo in his house. Otis just got out of surgery, he got lucky, there are options and it appears he is going to be ok. For now he is stable, the bullet is close to his spinal cord and there is a blood clot. Lilly and Cruz are the first ones to go in to see Otis, Cruz tells him the whole fire house is there and they are rallying for him.

Brit and Gabriella are sitting together, Brit tells her that for one moment she had her future with Antonio almost mapped out when she thought she was pregnant.

Stella is a little shaken but she is doing good. Kelly tried to walk over to her and chief calls him over in private and tells him that he is not happy that he disobeyed a direct order by running back inside the house. Kelly tells him that he can’t go through this again. The cops are letting the kid go who owned all the ammo, he walks right out and Cruz freaks out.

Cruz goes to see Otis and tells him there were loaded guns in the house and that is how he got shot. Otis is worried about Stella, but Cruz tells him she is fine and he swears to God that the kid who caused this is going to pay.

Sylvie is making a list of things to bring Otis from home, Gabriella tells her not to tell Antonio about the pregnancy test since she is in the clear. Sylvie tells her that she wants him to be exclusive, she really wants to try to make their relationship work. Sylvie heads out of the bar and bumps into Antonio, he tells her that he has a date – she is devastated.

Cruz is at chapel, the kid’s father comes in and talks to him. Kelly goes to see the chief and tells him that he meant no disrespect and it will never happen again. Chief gives everyone an update on Otis and the mother of the kid that got shot in the fire has died. Cruz is furious and asks if her son is finally going to be arrested for man slaughter. Chief tells everyone to put aside their anger and do their job.

The alarm goes off, there is another house fire and it is back at the same house where Otis was shot. This time it is coming from the garage, they can’t open it but Cruz gets under the door, gets in and removes the kid from his car – he was committing suicide. He is not breathing when Cruz gets him out, they end up getting a pulse and Cruz tells him that his dad needs him and knows that he didn’t mean it.

Otis is out of surgery, or should we say Brian as that is his real name. The doctor comes in and tests Otis’s feet to see if he has feeling, it seems like he doesn’t. Sylvie is cleaning out her locker, throwing out things out from her locker – especially those that remind her of Antonio. Stella is starting inventory at the bar when Kelly shows up, she asks him why he is dodging her. Kelly kisses her.