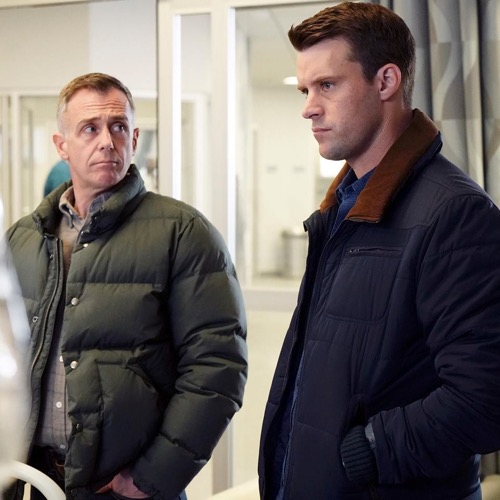 Tonight on NBC Chicago Fire returns with an all new Thursday, March 29, 2018, season 6 episode 16 called, “The One That Matters Most” and we have your Chicago Fire weekly recap below. On tonight’s Chicago Fire episode as per the NBC synopsis, “Herrmann, along with members of House 51, struggle to come to terms with an injury to one of their own, and then must deal with the new temporary replacement. Boden ponders some interesting news while Kidd has a hard time keeping a secret.”

Tonight’s Chicago Fire season 6 episode 16 looks like it is going to be great and you won’t want to miss it.   While you’re waiting for our recap make sure to check out all our Chicago Fire recaps, news, spoilers & more, right here!

Kelly and Stella are kissing in the car when Stella is not paying attention and almost hits a guy who is walking across the street starting at his cell phone. Otis has lost feeling in his lower extremities and the doctor doesn’t know why so they are going to run a series of tests.

Kelly and Stella arrive for morning call, the chief welcomes Jake who will be replacing Otis until he recovers since they are a man down. Christopher is not happy about it and calls is a slap in the face to Otis. Gaby knows Jake, they have worked together before. The alarm goes off, everyone is on their way to a call.

A girl comes out of a restaurant and tells them her father is stuck, his hand is stuck in a machine and twisted all the way around. They get the man’s hand out, but it is twisted badly. Gaby went to see Otis, he was off getting tests done. Stella is humming and Gaby asks her right out what is making her so happy.

Gaby guesses and tells her she can’t hide it forever, everyone is going to find out. Chief Grissom visits chief Wallace, he gives him a heads up that the deputy commissioner asks him for his idea on when he rides into the sunset and he suggested Wallace who says that he is very surprised that he would think of him. Grissom says he will be watching him from time to time, watching over his shoulder.

Wallace doesn’t look too excited about the possibility and Grissom reminds him that he has a family to feed. Grissom bumps into Kelly who apologizes to him for missing the dinner. Grissom tells him off and tells him that he is done trying with him.

Kelly and Stella talk about his encounter with Grissom, he tells her he is on the outs. Kelly wonders if that is even a bad thing since they haven’t been close in a while. Otis is going in for another test, he wonders if everything is going to be ok.

Meanwhile, there is a lot of frustration in the firehouse about Otis’ condition. Christopher and Jake get into it when Christopher tells him to cook for the troops. Matthew overhears and tells Christopher not to take it out on Jake because Otis was injured. The guy whose hand got all twisted has sent his family to the firehouse to whip up a feast for everyone.

Jake tells Matthew that he can handle a lot more and is the real deal, when he sees him in action he will see it is a no-brainer. Otis has hematoma pressing against his spine, everyone heads to the hospital to find him standing, he got some of his sensation back. It turns out that with rehab, Otis will recover. Lilly is taking good care of Otis – he tells her that he didn’t like the way Jake was looking at him.

Lilly says she feels bad for him trying to take his place when he will be returning. Otis gets into an argument with Lilly and tells her he is tired and he is sure she has better things to do – Lilly leaves.

Everyone is eating the meal that was prepared for them and it turns out that it is not very good, many are spitting it out. Stella pretends she got a call from their landlord for water leaking in their apartment and manages to get she and Kelly away from the kitchen so they don’t have to eat the meal.

The women promise to return in a week to cook for them again and everyone tells Cruz that he better get rid of them since one of them likes him.

Jake says it is going to be a long time before Otis returns and Christopher tells him he doesn’t know Otis. Otis is alone in his bed reading when Cruz and Sylvie show up to see him. Otis complains that the doctors don’t know how long the rehabilitation will take and he is not up to the company.

Sylvie and Cruz don’t leave and enjoy a pizza with him. Wallace is at home reading a book to his son. The women are back to cook and Cruz is getting grief for not speaking to them and getting rid of them. Jake is carrying the bunker coats and drops the one that belongs to Otis, Christopher sees it and gets upset, calls him out on it. Jake tells him that it is not Otis’ spot anymore and never will be because his knees are shaking like a bowl of Jello.

Cristopher punches Jake in the face, Matthew comes in after the fact and asks what happened, Jake says he slipped o the floor. Later Lilly tells Christopher that Otis doesn’t want her at the hospital and she is really upset about it. The alarm goes off, there is a guy caught between a beam and a scaffold and if they move the beam, the whole tower will come down. They manage to get the guy off and Kelly escapes with his life as well just before the whole scaffold falls down. Grissom is impressed with Kelly’s work, they shake hands; Stella is happy.

Wallace announces that Otis cannot return until at least two months of rehab and Jake is now assigned to truck 81 moving forward; Christopher is clearly not happy. Jake says he is sorry about Otis. Matthew tells everyone that they should be thankful that Otis is ok and even though he is not going to be around for awhile, they need to show up and give 100%. Wallace continues, tells everyone that Otis is in it for a long fight and he needs their support.

Wallace then says that the food is horrible and they need to throw it in the trash, little does he know, the two women were standing behind him – he got rid of them.

Stella is happy that Kelly took her advice about Grissom, he tells her that of course, he did, he values her advice. Gaby tells Jake that she has to tell the truth about him, he asks her to give him a chance first before she does. Christopher is at the hospital and watching Otis in rehab, he is happy to see Lilly there with him.